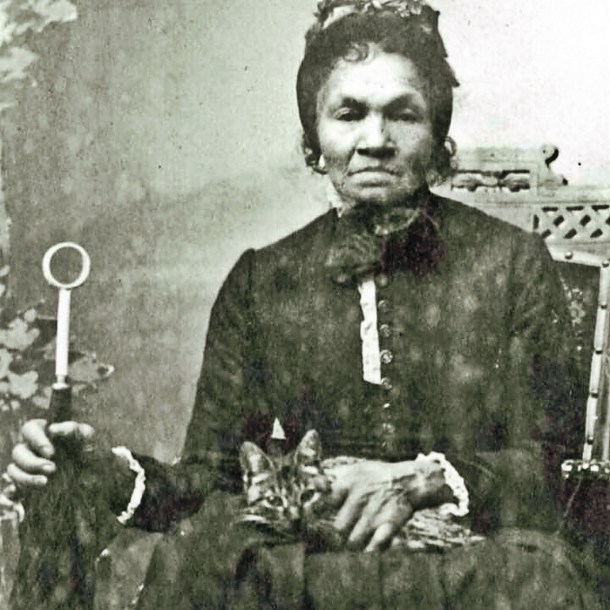 (Editor’s note: In the debate over Arlington author Dorothy Canfield Fisher’s legacy, the name Icy Palmer has come up multiple times. Palmer has long been a Manchester legend and is the inspiration for the local Icy Palmer Candle Co. This story is by Cherise Madigan of the Bennington Banner, in which it first appeared.)

[M]ANCHESTER — Icy Palmer is a name many in Manchester have heard before, though the history of this iconic figure remains murky.

For Arlington’s Melissa Klick, uncovering the woman behind the legend has become a mission of sorts. As a lifelong resident of Manchester, with French Canadian and Abenaki heritage, Klick became interested in Palmer at a young age.

“I grew up in the house across from Dellwood Cemetery, and it was very different then — overgrown and difficult to find things,” said Klick. “We stumbled upon this little grave that read ‘Icy Palmer’ and found out that she was this legend in town.”

Klick fostered this fascination for many years and went on to enjoy a long career in the arts. In her retirement, however, Klick soon became restless and decided to reconnect with the legend of her childhood. Thus, the Icy Palmer Candle Co. was born.

“Every night she would light two candles at dusk, and they would burn until dawn for enchantment and protection,” said Klick. “I found that fascinating, and just loved it. I know that she made candles, and she burnt candles, so I think it’s the perfect union.”

Born in 1824, Palmer was a Tuscarora Indian said to have been abandoned in what was then a sugar house at the current location of the Equinox Valley Nursery.

“There was an article that says that she had a twin sister, and they were born in a sugar house in September. The Tuscarora really moved separately, so it was probably just the mother and father staring down winter,” said Klick, who concedes that this aspect of Palmer’s story will likely remain conjecture. “My feeling is that they probably took the healthiest of the twins. God forbid you have two girl babies to walk into the winter with.”

Though this is the prevailing narrative, a competing tale suggests that Palmer was given away by her parents at only a few weeks old rather than abandoned in the sugar house.

“I always wonder if her parents knocked on any doors or if they just abandoned her, because this is September,” said Klick. “Who is even going to enter a sugar house and discover this baby? We’ll probably never know how they discovered her.”

Palmer was taken in by several local families as a child, including the G.S. Purdy and W.P. Black families, according to documents provided by the Manchester Historical Society.

“She was actually named Louisa, and she changed it to Icy,” said Klick. “She worked in different houses and families. She was very beloved, but she was also very mysterious.”

Some years later the Ladies Benevolent Society of Manchester’s Congregational Church provided a small home for Palmer, though she continued to wander.

“One of her mysteries is that she walked all of the time collecting kindling and butternuts,” said Klick. “It doesn’t seem like her nomadic roots ever left her.”

“The weather held no terrors for Icy,” read Palmer’s 1911 obituary in the Manchester Journal. “Neither the summer’s heat or the winter’s blasts could keep her in when she wanted to be out.”

In adulthood, Palmer was primarily supported by benefactors in the Manchester community though she also derived income from selling maple-sugared butternuts and candles.

Though she lived independently until 1909, Palmer was “over eighty and losing her mind,” according to an excerpt from “Manchester, Vermont: A Pleasant Land Among the Mountains, 1761-1961.”

“They found her wandering around during the winter in her summer clothes,” said Klick. “The community sent her to the Brattleboro Retreat.”

“Her condition became such, on account of her extreme age, that it was considered advisable by those who had only her best interests at heart, to have her placed in the retreat at Brattleboro for the remainder of her days,” read the obituary. “Reports from there from time to time have only proved the wisdom of the move, for she has been quietly and serenely happy and well.”

Two years after her move to the Brattleboro Retreat, Palmer died peacefully in her sleep.

“Indeed, one of the landmarks of the town as fallen,” read Palmer’s obituary in the Journal.

Assisted, but not accepted

Though Palmer was taken in and provided for by the Manchester community, Klick contends that she was not considered an equal member of society.

“[In her youth] she lived in barns and was not allowed a room, and waited on these people,” said Klick. “She was very gentle and very quiet. She bowed to people.”

“Everyday, regardless of the weather, Icy walked the roads and toward night trudged home drawing a bundle of wood,” reads “A Pleasant Land Among the Mountains.” “If she met anyone, she turned her back and stood with a bowed head until they passed.”

Klick noted that on census reports Palmer was mistakenly listed as African-American, then white, and in some cases referred to as “Ivy.”

Despite her humble demeanor, Palmer seemingly considered the legacy she would leave behind.

“Despite having been Manchester’s number one welfare case for nearly a century, she had managed to lay away a bit. … Icy Palmer had already bought her own lot and headstone at Dellwood Cemetery,” says “A Pleasant Land Among the Mountains.”

“Here’s this nomadic woman, always wandering and never really having a home of her own,” said Klick. “I think she wanted a home at the end.”

Upon her death, a service was held for Palmer at Manchester’s First Congregational Church prior to her burial at Dellwood.

“Because she was an Indian, her funeral service was held in the joining chamber of the church. She was not allowed in the church for her funeral,” said Klick. “She was taken care of, she was assisted, but she was not accepted.”

Remarking on the remaining photographs of Palmer, and referencing the fact she bought her own headstone, Klick is adamant that Palmer wanted to be remembered.

“There’s just something when you look at her photos,” said Klick. “Her face has this fierce pride and integrity.”

Today, the legend of Icy Palmer remains alive and well in Manchester. Even in her own time, her fame was recognizable.

“She was known to every person who has been coming to Manchester as far back as any of us can remember,” stated the Manchester Journal in her obituary.

“I do give Manchester credit, because they did take care of her,” said Klick. “They did make sure she was fed and had clothes.”

In her candle-making business, Klick hopes she can continue the complex legacy of Icy Palmer.

“I still visit Icy’s grave. I call them staff meetings,” said Klick. “I say to her all of the time, ‘We’re not bowing to anyone anymore, Icy.'”

Thanks for reporting an error with the story, "Icy Palmer: A Manchester legend brought to life"