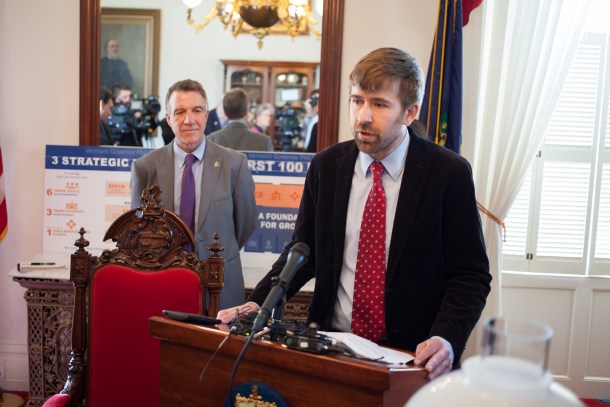 Gov. Phil Scott signed a bill into law on Wednesday that will protect journalists from revealing their confidential sources in court.

Scott signed the bill, S.96, surrounded by journalists who supported the bill. “It’s a bit strange to have you on the same side of the table,” he said.

Journalists had lobbied the Vermont Legislature to pass the so-called shield law. The law prohibits judges and other parts of state government from using subpoena power to force journalists to reveal sources who reporters have promised anonymity.

“This protection enables sources, from whistleblowers to victims of a crime, to feel confident in their ability to speak freely with the press, ensuring accountability and giving the vulnerable a voice without fear,” the governor said.

Paul Heintz, a political editor for Seven Days, lobbied for the new law on behalf of the Vermont Press Association. He said journalists and their sources are under attack all across the country, including by President Donald Trump’s administration.

“Just yesterday, the New York Times reported that in an Oval Office meeting in February, the president asked his FBI director to jail reporters who reported classified material,” Heintz said. “We don’t hear such deeply un-American threats in Vermont, but that does not mean Vermont reporters and news organizations don’t face grave threats.”

Heintz thanked a slew of journalists who advocated for the bill, including independent journalists Hilary Niles and Dave Gram, and editors at VTDigger.org and Vermont Public Radio.

“I hope that this bill signing will serve as a reminder that in such troubling times, it’s incumbent for us as journalists to stand up for our rights,” he said. “If we don’t, nobody else will.”

“Now that this bill has become a law, I would like to implore Vermonters to reach out to reporters with stories that need to be told,” Heintz said. “If you face injustice at the hand of a powerful person or institution, let us know. If you’re a potential whistleblower, get in touch, and blow that whistle.”

The Society of Professional Journalists, a national trade group, says that government officials across the country “have attempted to jail and even bankrupt journalists to force them to reveal their sources or information they have gathered.”

Jim Condos, the secretary of state, said there have been two specific cases in Vermont against journalists that “alarmed” him. In 2005, the Vermont Supreme Court ordered WCAX-TV to turn over raw video footage of a riot that happened after the Red Sox won the World Series.

In 2015, a judge subpoenaed several Seven Days reporters — including Heintz—for information gained through interviews with former Sen. Norm McAllister, and from interviews with the women who accused McAllister of repeated sexual assault.

“What gets lost is the media is the public,” Condos said. “The media is the watchdog for the public. And if the media was to have to reveal its sources it would probably have less opportunity to talk to those sources in the future, and therefore would be less likely to be able to report fully and transparently on issues.”

The bill provides an “absolute privilege” to not turn over information provided by confidential sources.
Non-confidential information would only be turned over if it passes a three-prong test: whether the information was “highly material or relevant”; could not be obtained through other means; or there was a “compelling need” for disclosure.

The law goes into effect immediately.

Thanks for reporting an error with the story, "Scott signs shield law for journalists"