[V]ermont’s largest health insurer has asked state regulators to allow it to increase premiums for people using plans on Vermont Health Connect by an average of 12.7 percent starting Jan. 1.

That’s the most that Blue Cross Blue Shield of Vermont has requested to increase premiums since the insurer began offering exchange plans in 2014.

The plans cover about 70,000 people using Vermont Health Connect, whether they buy the insurance as an individual or through a small business. Depending on each person’s plan choice, the premium increases would range from 11.1 percent to 14.6 percent.

MVP Health Care, which covers the remaining 10,300 commercial customers using Vermont Health Connect, is requesting a 6.7 percent average premium increase. The increases for individual customers would range from 2.3 percent to 10.5 percent, depending on the plan they use. 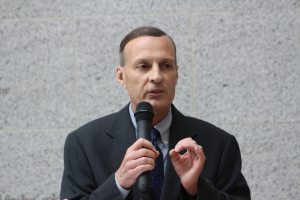 “We fully appreciate the impact that this increase will have on our members, and we do take seriously the responsibility to explain these increases to our members,” said Don George, the chief executive officer of Blue Cross Blue Shield of Vermont.

George said about half of the average increase — 6 percentage points — is beyond the insurer’s control. Specifically, 3 percentage points come from a tax that the federal government uses to fund the Affordable Care Act, he said.

George attributed 2 percentage points to the so-called cost shift, the theory that commercial insurance must subsidize Medicaid and Medicare because those programs reimburse hospitals below their costs. An additional 1 percentage point of the increase is related to Vermont’s aging population using more expensive services more often, he said.

Of the remainder of the increase, he said 4.2 percentage points are related to increased health care costs. That includes increased prices for hospital visits, doctor visits and prescription drugs, combined with increased medical utilization.

“That is up from last year because for about the past year we have been noticing that the members that we have in (Vermont Health Connect plans) are using increased services at an increased rate,” George said. But he said hospitals and doctors are “doing a commendable job” controlling price increases.

The final 2.5 percentage points reflect smaller cost drivers, George said. They include a 0.9 percent surcharge to make up for what the Green Mountain Care Board cut from the insurer’s 2017 rates, plus fractions of a percentage point for administration and state-level regulatory fees.

George said the insurer, which is a not-for-profit, spends only 6.5 percent of the total premium amount on administration. He said that share is far lower than the maximum of 20 percent that the Affordable Care Act allows insurers to spend on administration.

The Green Mountain Care Board, which regulates insurance prices, will hold a hearing on the premium increase request July 20. In the meantime, the board’s actuaries will review the requests to determine whether the increases are justified.

Mike Fisher, the chief health care advocate for Vermont Legal Aid, said his staff would do the same. Vermont Legal Aid’s Office of the Health Care Advocate will testify on behalf of the public interest at the July 20 hearing.

“The advocate’s office has a serious job to do here in evaluating this rate proposal carefully, pulling it apart, understanding the cost drivers, and as we do that, keeping in mind the pressure that Vermonters feel around affordability,” Fisher said.

“The advocate’s office receives calls every day from people who feel like health care is not affordable today,” he said.

Thanks for reporting an error with the story, "Blue Cross requests 12.7 percent premium increase"