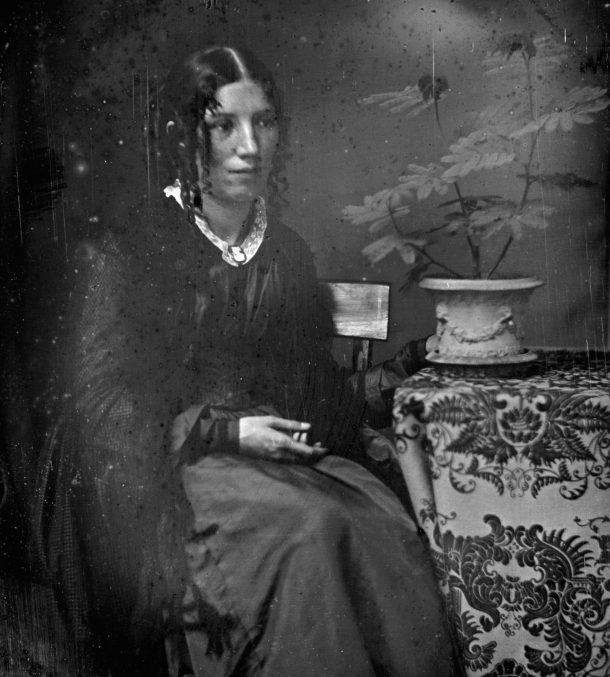 Harriet Beecher Stowe came to Brattleboro in hopes that the water cure would relieve her melancholia. Library of Congress photo

(“Then Again” is Mark Bushnell’s column on Vermont history.)

[S]omething was wrong with Harriet Beecher Stowe. She felt down in her spirits. Perhaps, people suggested, she was suffering from melancholia — today, we might say she was depressed. So, she did what anyone with the means in the mid-19th century would do: She took the water cure.

The popular therapy involved drinking and bathing in spring water. For her treatment, Stowe, who a few years later would write the famous anti-slavery novel “Uncle Tom’s Cabin,” picked the most exclusive, or at least the most expensive, facility of her day: the Brattleboro Hydropathic Institution.

The state-of-the-art establishment drew thousands of wealthy people to Vermont, as well as luminaries like Stowe and the poet Henry Wadsworth Longfellow. In Brattleboro, patients were treated for cancer, epilepsy, asthma, dropsy, sweating hands, bunions, scrofula … the list goes on.

The other seemingly endless list is the one of supposedly curative springs that sprang up in Vermont in time to catch the water cure fad that raged in the 1840s and 1850s. Clarendon, Newbury, Sheldon, Tunbridge, Middletown, Manchester, Alburg, Highgate, Wheelock, Hardwick, Woodstock, Brunswick, Quechee – every community seemed able to find some water to charge people for using.

Not that people seemed to mind parting with their money. The cure, they thought, was worth it. One patient, in a testimonial, wrote that “in using less than a case of water procured from your company, my whole system has been benefited and my headache well nigh cured.” Another man wrote that “waters you supplied have unleashed passions of great magnitude.” Even the makers of Viagra don’t make that claim.

But this was the 19th century; there was no Food and Drug Administration, so hydrotherapy practitioners could make any claim they liked. And the public, eager for cures, was ready to believe them.

The water cure was applied to almost any malady. Stowe’s treatment for mental unrest was typical. She was awakened at 4 a.m., wrapped from head to toe in thick wool blankets and left to wait. When she was drenched in sweat, she was seated in front of an open window, her head exposed. Then she was plunged, still wrapped in her blankets, into a cold bath.

Stowe described it this way: “(I would) let all the waves and billows roll over me till every limb ached with cold and my hands would scarcely have feeling enough to dress me.”

After that, she dried herself, dressed and went on a strenuous walk before sitting down to a cold breakfast. Then came bouts of vigorous exercise interspersed with plunges into cold, often icy, streams. And during the course of the day, she was expected to drink 20 to 30 tumblers of water. If that won’t cheer you up, what will? 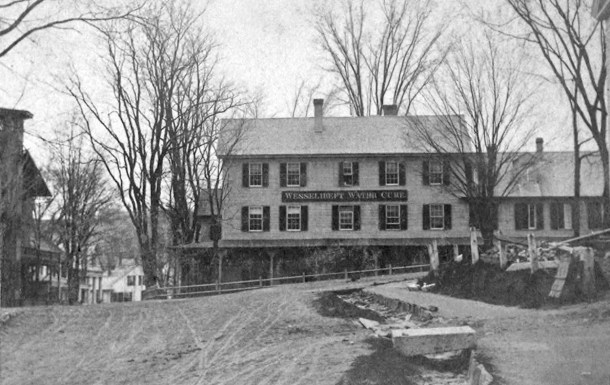 Patients flocked to Brattleboro to undergo the water cure offered by Dr. Robert Wesselhoeft at his clinic. Vermont State Archives

For the pleasure of these painful treatments, she paid the exorbitant fee of $10 a day ($11 a day in summer). The cost would normally have been beyond her means, but friends helped raise the money for her 11-month stay.

Stowe’s doctor was Robert Wesselhoeft, a German immigrant who had studied hydrotherapy from Vincent Priessnitz, one of the leaders of the movement in Europe. Priessnitz, an Austrian, had used water immersion to cure himself after being trampled by a horse as a teenager.

But the use of water as a treatment is much older. It dates back at least as far as 500 B.C., when it was used by Hippocrates, the Greek who the medical oath is named after.

The theory behind hydrotherapy, according to Dr. Russell Trall, one of its leading 19th-century practitioners, was that by wrapping patients in wet blankets, the impure water in their blood would pass through the skin and be replaced by the pure water in the sheet. Trall wrote that the treatment “was not a universal cure, as diseases are not universally curable, (but) it was a remedy universally applicable.”

But it wasn’t one that was universally accepted. In 1845, the Boston Medical and Surgical Journal wrote that healers who “had not succeeded in regular practice, in homeopathy, animal magnetism, pathetism, in the use of purgative pills, temperance bitters, galvanic rings, in thermoelectric practice, Beachism, Thomsonism, Grahamism or any other of the known modes of mongrel practice, have become thorough converts to the water cure.”

The first Vermonter to promote the water cure was George Round, who said he found a spring in Clarendon after dreaming of it. Not to overlook the commercial possibilities of his aquifer, Round built a log cabin inn on the spot. Round found the spring in 1776. By 1798, a hotel had replaced the cabin. 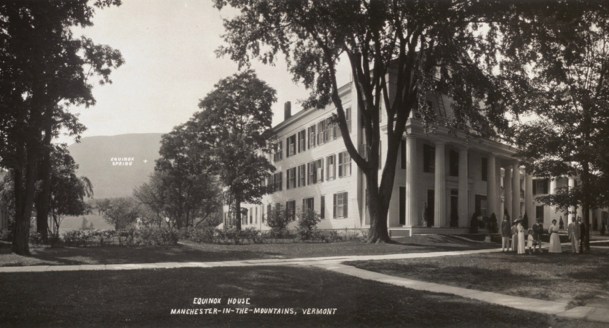 Manchester was one of many Vermont communities that marketed local springs to attract visitors. In this photo, a hillside in the distance bears the words “Equinox Springs." Vermont State Archives

The same happened in other towns. Of the 126 named springs in Vermont in the late 19th century, 31 attracted hotels. Some had more than one. Sheldon, which like many communities appended the word “Springs” to its name as a marketing tool, boasted as many as 10. This water cure craze was a developer’s dream.

Residents of the Northeast Kingdom town of Wheelock knew about, but mostly ignored, the spring in the center of town. When they referred to it at all, they called it the Stinking Spring. But a businessman from Boston took one whiff and smelled profit. This man, Royal Winter, whose name sounds like a body wash, bought the Brick Hotel in town and renamed it the Caledonia Mineral Springs Hotel. He fixed up the place and piped spring water into the rooms.

But the spring was Winter’s downfall. The water quickly lost its sulfur taste. Guests liked their water fetid. The smellier, the stronger the curative powers, they believed. Worse yet, the water corroded the copper pipes in Winter’s hotel.

A few miles east in Brunswick, entrepreneur A.J. Congden bought the town’s six springs and named each one. He called them Iron Spring, Calcium Spring, Magnesium Spring, White Sulphur Spring, Bromine Spring and Arsenic Spring. By administering them in different doses and sequences, he said, he could cure a variety of ailments. The trouble was the water all came from the same source.

Despite the quackery sometimes associated with the water cure, it seems to have helped some patients. Stowe was happy enough with her stay in Brattleboro that her husband soon sought help there, too. And though it didn’t cure Longfellow’s eyes as he’d hoped, he was sure the treatment would have done the trick if he had stayed longer.

In reviewing more than 500 cases he’d treated, Dr. Wesselhoeft included two he couldn’t cure just to show that the treatment didn’t help everyone.

So, what’s to account for the successes of this odd therapy? For one, it got many patients out of the polluted cities where they lived. It forced the wealthy, who were used to eating large amounts of fatty foods, to follow a sparse diet, and to exercise.

Then there was the social aspect. Hydrotherapy was in. Anyone who was anyone found a reason to take the water cure. When not having various forms of water torture inflicted upon them, patients found time for socializing. In fact, Wesselhoeft had to write in his advertisements that his center was for medical treatment, not entertainment. Finally, there was the placebo (or maybe the price-tag) effect. If I’m paying all this money, patients may have thought, the cure has to be doing me some good.

Eventually, like all fads, this one faded. The wealthy began to gravitate toward other pursuits. Their interests gradually turned toward walking, automobiles and water sports — boats, not baths. By the late 19th century, most of Vermont’s water cure centers had closed. Many seem to have closed when their hotels burned, which is ironic considering how much water they had lying about. The spa towns that hung on, notably Woodstock and Manchester, offered guests something more than smelly water, like golf.

Dr. Wesselhoeft and his hydrotherapy institute didn’t live to see the decline. The doctor fell ill in 1851. It couldn’t have helped his business in Vermont that he sought medical help in Germany. Wesselhoeft died the next year. His widow, Ferdinanda, continued to run the institute, but it closed a few years later.
/

Thanks for reporting an error with the story, "Then Again: When water was the cure for what ailed you"