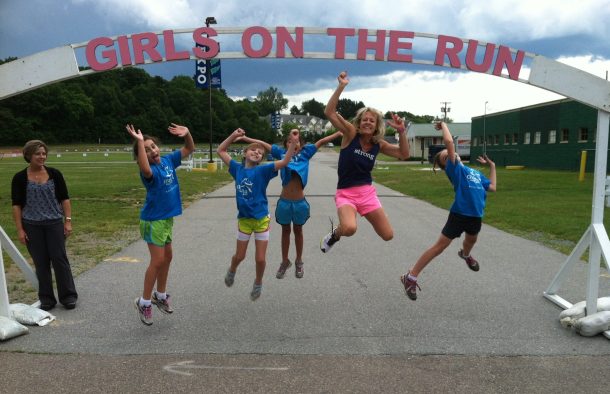 Nancy Heydinger, second from right, executive director of the nonprofit Girls on the Run of Vermont program, is set to run in Monday’s Boston Marathon. Provided photo

VERNON — When Vermonter Nancy Heydinger witnessed the bomb blasts four minutes after completing the 2013 Boston Marathon, she nevertheless put her mind on returning and running again.

She didn’t foresee her biggest roadblock would be a brain tumor.

Four hours earlier, Heydinger had stood at the start with her college-age daughter Caroline, who ran ahead with plans to reunite at the finish. But when the now 56-year-old mother reached the end of the race, she encountered something else.

“I was really excited, smiling and happy,” she recalls. “That’s when I heard the big bang.” 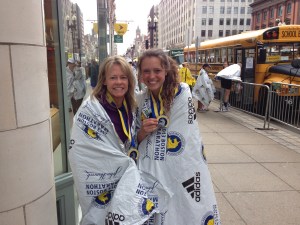 Nancy Heydinger and her daughter Caroline after running in the 2013 Boston Marathon. Provided photo

Seeing billowing smoke, Heydinger found her daughter and fled the scene. As news of the bombing that killed three people and injured more than 260 others reverberated throughout New England and the nation, the Vernon resident felt a growing pull to help reclaim the spirit of one of the world’s oldest and most prestigious races.

“I’ve learned whatever happens becomes part of your story,” she says today. “I thought for sure my marathon days were over, but the bombings made me want to run it at least once more.”

After a series of health problems, however, Heydinger was diagnosed with a plum-size growth in her cerebellum that required immediate removal.

“Last March I was coming home from the hospital with a long scar from the top of my head to the bottom,” she says. “If you had told me then I would be running the Boston Marathon one year later, I would have thought you were crazy.”

But on Monday, after a journey more fearsome than the race’s Heartbreak Hill, she’s set to do just that.

‘The messages you get’

To fully explain how far she’s come, Heydinger rewinds back a half-century to her birth in a “Mad Men” era that encouraged women to be seen and not heard.

“My parents said, ‘She’s got to be a princess, so we’ll name her after Miss America.’”

As early as elementary school, Heydinger shared another attribute with her namesake, 1960 winner Nancy Anne Fleming: She felt everyone was judging her.

“The messages you get from peers, family, society and the media are always coming in — it could be about your clothes or your hair, how tall or short you are, the money your family has or doesn’t have,” she says today. “Experiences that we have when we are young are so powerful.” 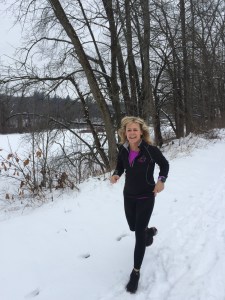 Shy and insecure, Heydinger discovered running and its ability to move her personally as well as physically. Going on to marry and give birth to three children, she wanted her two daughters to grow up with more self-confidence. That’s when she learned of the national nonprofit Girls on the Run empowerment program and launched one of the first of its more than 200 regional chapters.

“You don’t have to be athletic,” says the woman who now is executive director of a Vermont branch that boasts nearly 3,000 participants and 800 volunteer coaches in 160 locations statewide. “Girls on the Run is for girls of all abilities, sizes, shapes and different facets of life.”

Introducing a generation weaned on screens to fresh air, fitness and face time is a challenge specific to the 21st century. Standing at the start of the 2013 Boston Marathon, Heydinger hoped she could offer today’s youth some personal inspiration. That said, having turned 50, she also figured the 26.2-mile race — a length she had run two dozen times before — would be her last.

Kicking off, Heydinger anticipated friends cheering her on at mile 17. But when she reached the last downslope before Heartbreak Hill, she didn’t see them.

Heydinger stopped at a medical tent to stretch. Glancing at her watch, she realized if she returned to the road, she could finish the marathon in less than four hours.

“I sprinted that last mile as fast as I could.”

Her time: 3 hours, 59 minutes, 38 seconds. Then an explosion shattered the moment.

Grabbing her daughter, Heydinger immediately drove back to Vermont. Fielding questions from girls worried about what could happen to them, she talked up the program’s lessons on resilience.

Her supposedly last marathon finish, she realized, instead would be a new start. But training to qualify again, Heydinger suffered one injury after another.

“My balance was off, my memory lacking.”

Doctors wondered if it was menopause or an iron deficiency. Then they discovered a benign yet life-threatening tumor. 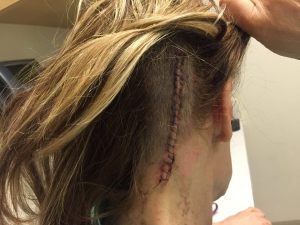 “I realized that I used the very lessons we teach in Girls on the Run — the importance of slowing down, taking deep breaths and centering, processing before reacting, acknowledging feelings, staying positive, being grateful, valuing what is really important and advocating for myself — to help me to be strong, intentional and optimistic,” she went on to post on her Facebook page.

The Vermonter was back working this past winter when a homeopathic remedy company called Hyland’s sought a team of 14 inspiring women to run in this year’s marathon to mark the 50th anniversary of female participation.

Heydinger submitted her name and, selected just weeks later, began running between 6 and 16 miles a day while aiming to raise $5,000 for Girls on the Run. She’ll step off Monday alongside 30,000 other entrants.

Boston Marathon organizers have restored the finish line with a fresh coat of paint. But some remnants of the past aren’t so easily erased. Take Heydinger’s surgical scar.

“This symbolizes adversity and is a continuous reminder of my good fortune,” she says. “It helps me to keep life, commitments and obligations in perspective. It helps me to appreciate and be present in every moment and to be grateful for all that I have.”

This Easter weekend, it also serves as a personal sign of rebirth.

“I feel like I’m on the same level as our girls,” she says. “We’re asking them to stretch themselves. And we all have the ability to turn a negative into a positive.”

She left the start in the same section as Kathrine Switzer, the 70-year-old who in 1967 — registered as K.V. Switzer — became the first woman to complete the then-all-male event as an official entrant.

Heydinger ran each mile in times that ranged from 8 minutes, 49 seconds to 9 minutes, 56 seconds.

“She kept a very steady pace the entire time — that’s one of the lessons we teach,” said Erin Wood, a colleague of Heydinger’s at Girls on the Run. “We all screamed and got a little teary-eyed and had a sigh of relief for her. It’s been a flutter of excitement and emotion.”

Thanks for reporting an error with the story, "UPDATED: Vermonter overcomes odds to rerun Boston Marathon"

Community capitalism would strengthen both markets and people