[I]n a show of partisan posturing, House Democrats voted to rescind an executive order Wednesday issued by Republican Gov. Phil Scott that would have merged the Lottery Commission with the Department of Liquor Control.

The order, which would have saved $500,000 a year, was dismissed by Democrats because they said it would interfere with efforts already underway to modernize the liquor control.

Scott issued the order shortly after he was inaugurated in January.

The Legislature’s options were to allow the order to stand as is or vote to rescind it in an up or down vote. Lawmakers could not amend the order.

Rep. Heidi Scheuermann, R-Stowe, voted against the House resolution to rescind because she believes it’s sensible to put the two state agencies under one roof.

“We missed an opportunity to be an agent for common sense,” Scheuermann said on the House floor.

Democrats argued that the governor’s order did not provide enough information about how the merger would work and gave the executive branch too much leeway.

Rep. Jill Krowinski, D-Burlington, described the merger as a “huge policy change and we need to get it right.”

The House plans to introduce a provision that would authorize a working group charged with developing recommendations for merger legislation next year. It would be the second study committee in a two-year period to review liquor control. A group last year recommended changes to arcane provisions in state statute.

Rep. Oliver Olsen, I-Londonderry, called into question the constitutionality of the rescission vote and pressed his colleagues to consider whether the Legislature has the authority to block an executive branch order. 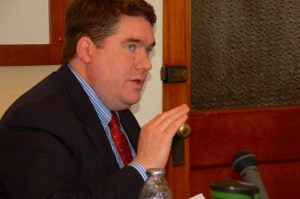 Olsen’s arguments were ultimately dismissed by House Speaker Mitzi Johnson. And, in a party line vote, 87 to 59, the House chose not to send the bill back to the House General, Housing and Military Affairs Committee to consider the constitutionality issue Olsen raised.

A brand new Republican House member, Jim Harrison, who was appointed this week by Scott to represent Rutland-Windsor-1, wasted no time jumping into the fray. Harrison, the former director of the Vermont Retail and Grocers Association, urged his colleagues to vote down the rescission resolution instead of “wasting” another year, waiting for a study.

“Let the executive order go into place,” Harrison said. “Don’t do a study.”

In a statement, Rebecca Kelley, a spokesperson for the governor, described the House majority’s unwillingness to support the merger was “inexplicable.”

Kelley said a merger of the Lottery Commission and the Vermont Department of Liquor Control had been “discussed for a decade” and it has strong support in the Senate.

“It appears they have put politics ahead of the opportunity to modernize government for the people we serve,” Kelley said.

“This merger would allow us to better serve Vermont retailers and empower them to improve service to their customers, while making better use of taxpayer dollars,” Kelley said. “This simple structural change would create a Department that was still among the smallest in all of state government with fewer than 80 employees.”

The governor is also disappointed that Olsen’s “credible legal questions” were not reviewed.

There appear to be “clear constitutional concerns about the authority of a single chamber of the Legislature to rescind an executive order,” Kelley wrote. “It is certainly something we will consider further.”

Several other executive orders issued by the governor, including a government modernization effort, have not been opposed by House Democrats.

Thanks for reporting an error with the story, "House rescinds Scott executive order"