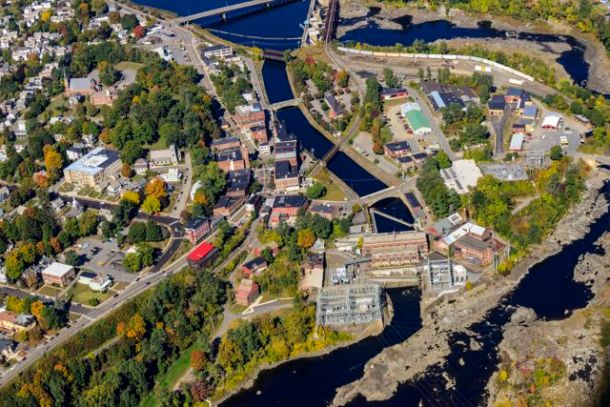 [B]ELLOWS FALLS – Four months after announcing an agreement to buy 13 hydroelectric stations on the Connecticut and Deerfield rivers, a Boston company is close to sealing the deal.

Now, a state Public Service Board review appears to be in its final stages. And, as part of that process, Great River has finalized a power-allocation agreement with the owner of a historic property in Bellows Falls.

If the state signs off on the hydro dam sale, no other obstacles remain, said Warren Coleman, a Montpelier-based government relations consultant for Great River Hydro.

“They would hope to close (on the sale) shortly after the Public Service Board order is issued – probably within a few days,” Coleman said.

Early in 2016, TransCanada announced plans to sell the hydroelectric facilities and other power-generating assets in the Northeastern United States to finance its acquisition of Houston-based Columbia Pipeline Group.

Vermont officials, via a special working group created by then-Gov. Peter Shumlin, spent months considering the feasibility of the state’s “partial or full acquisition” of the hydroelectric assets. Long-term control of a large-scale renewable power source was the primary motivation for the state’s efforts.

But officials late last year concluded that the state should not get involved, at least for the time being. Shortly afterward, TransCanada announced its sale agreement with Boston-based ArcLight Capital Partners – the parent company of Great River Hydro.

Seven facilities on the Deerfield River in Vermont and Massachusetts are also part of the agreement. There are four stations bearing the Deerfield name, along with the Sherman, Harriman and Searsburg stations.

TransCanada has said the stations produce a combined 560 megawatts of power.

Federal regulators in January signed off on Great River’s purchase, concluding that “the proposed transactions are consistent with the public interest.” Officials also noted that there had been no “comments, protests or interventions” filed regarding the hydro sale.

The state Public Service Board’s review is ongoing, though the board’s published schedule wraps up this month. An evidentiary hearing is scheduled March 23, with follow-up briefs due March 31.

Great River Hydro, in documents filed with the board, says ArcLight is “exclusively focused on the energy industry and has invested more than $3.1 billion in renewable power facilities, representing approximately 5,000 megawatts of generation.”

In its Public Service Board petition, Great River says its proposed purchase of TransCanada’s dams “ensures that the facilities will continue to be operated in a safe and reliable manner by an experienced, knowledgeable and financially strong company.”

The company has committed to continuing federal relicensing proceedings for the Bellows Falls, Wilder and Vernon stations. The current Federal Energy Regulatory Commission licenses for those hydro dams expire in 2019.

Great River also is promising retention of existing workers and “continued receipt of tax revenues by local communities.” Taxes are a key concern for communities like Rockingham and Vernon, which have fought assessment battles with TransCanada.

A different type of financial concern led to a recent power agreement between Great River Hydro and Island Corp., which owns the former Moore and Thompson Paper Mill complex in Bellows Falls.

The historic mill property is situated near the Bellows Falls hydro station on what’s known as the Island – a plot of land between the Bellows Falls Canal and the Connecticut River. The older, “lower” mill is vacant, but the upper building houses tenants including WOOL community radio, several arts organizations and the local historical society.

The power agreement actually is a continuation of a long-standing contract. In fact, it dates to 1881, when the negotiation involved “mill power,” a term quantifying the power and value of available water, according to Island Corp. attorney Andrew Raubvogel.

In its current form, the agreement says Island Corp. is entitled to receive up to 300 kilowatts of free electricity from TransCanada at any given time.

TransCanada inherited that deal from previous owners of the Bellows Falls hydro dam. And with TransCanada now trying to unload the property, Island Corp. filed a motion to intervene in the Public Service Board review in an attempt to ensure that its “property and contractual interests are not impacted.”

A subsequent memorandum, dated Feb. 14, says Great River Hydro has agreed to honor the power deal. And in return, Island pledged to support Great River’s case before the Public Service Board.

Raubvogel pointed out that the free power contract “doesn’t expand any rights and doesn’t create any new rights.”

“This agreement was simply to memorialize what the parties believed was the status quo,” Raubvogel said.

Thanks for reporting an error with the story, "Purchase of 13 dams on the Connecticut River nearing finish line"