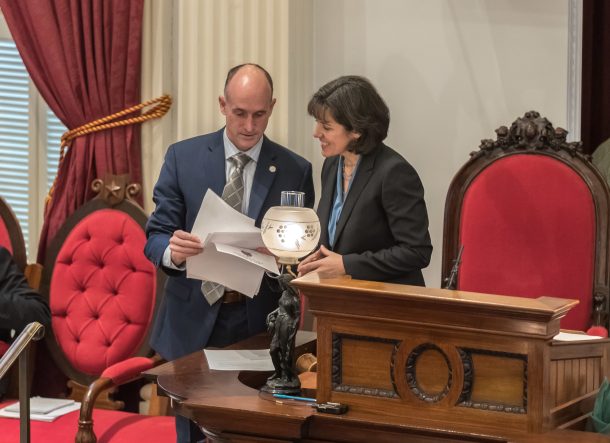 [A]fter substantial debate, the House approved a bill that shortens the process for people to expunge their records of certain criminal convictions.

The bill would make people eligible to seek expungement of many crimes three years after completion of the sentence, instead of 10. For more serious offenses, the period would be shortened from 20 years to five.

H.171 had passed out of the House Judiciary Committee with strong bipartisan support. Ten members voted in favor, and one member was absent. But the measure faced considerable resistance in the House.

Rep. Martin LaLonde, D-South Burlington, who reported the bill on the House floor, said the legislation fits in with a broader effort the committee is making to reduce incarceration and recidivism and to mitigate the “collateral consequences” of a criminal conviction.

After completing a sentence and paying restitution for a conviction, a person still feels lingering impacts of a conviction, he said.

“The person has a criminal record still and is still in some respects being punished even after having served those formal punishments,” LaLonde said.

A conviction on someone’s record can make it more difficult to get professional licenses, qualify for public housing or access funding for higher education, he said.

Through the expungement process, somebody with a conviction for a qualifying crime can petition the court to have that record cleared. Most convictions eligible for expungement are nonviolent misdemeanors, according to LaLonde.

Though the bill was broadly supported within the committee, many members of the House had reservations about supporting it.

When the bill came up for final approval in the House on Thursday, two amendments were offered by representatives who felt the legislation goes too far.

Reps. Barbara Murphy, I-Fairfax, and Anne Donahue, R-Northfield, offered an amendment that would have changed a section of the bill that would allow people to seek expungement again one year after a petition for expungement was denied. They sought to keep current law, which requires a wait of five years.

That measure was defeated.

Browning argued that the proposed change to the expungement law would hinder employers’ ability to know about potential employees’ criminal history. She opposed the House Judiciary version of the bill “for the safety of the community,” she said.

“If I was trying to hire someone to take care of my mother, I would want to know,” Browning said.

Her version of the bill would have altered a judge’s ability to seal information relating to certain types of criminal convictions. It also would have required longer wait times for eligibility for expungement than in the underlying bill.

Browning’s amendment was divided into two sections, and both failed on roll call votes. After her proposals were rejected, Browning urged lawmakers to vote against the bill.

“It goes too far, too fast,” Browning said.

However, supporters of the bill said it is a positive step.

Rep. Kiah Morris, D-Bennington, a member of the House Judiciary Committee, reiterated her support for the bill during discussion on the floor.

The goal of the correctional system is to “reintegrate our citizens back into our community in a way that is meaningful,” she said. She argued the bill is in line with that objective.

H.171 ultimately passed on a vote of 89 in favor and 51 opposed. The bill will now move to the Senate for review.

Thanks for reporting an error with the story, "After wrangling, House passes bill to speed expungement"