[T]he Vermont Department of Corrections is having difficulty finding a new location for out of state prisoners because of an anticipated influx of immigrant detainees.

Immigrations and Customs Enforcement is looking to lease beds in locations across the country, Vermont officials say.

State prison commissioner Lisa Menard told the Senate Appropriations Committee this week that federal demand for prison beds is impacting the search for a new placement for Vermont prisoners held out of state. 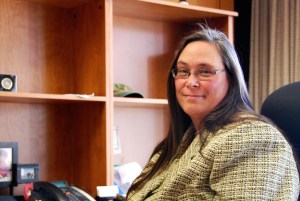 Lisa Menard, commissioner of the Department of Corrections. Photo by Elizabeth Hewitt/VTDigger

Vermont’s contract with Geo Group, a Florida-based for-profit prison comany, expires on June 15, and in December the company opted not to extend it. About 400 Vermont inmates have been housed at North Lake Correctional Facility in Michigan for the past few years.

Menard told the committee that the department has reached out to other states and to private contractors and found “that everyone with vacant beds is hoping the federal government will lease them at a much higher rate than the Department of Corrections in Vermont will.”

Another change in federal policy this week could increase competition for private prison beds. On Thursday, U.S. Attorney General Jeff Sessions reversed a directive under the Obama administration to reduce the use of private contractors by the federal Bureau of Prisons.

Mike Touchette, facilities director for the Department of Corrections, said it appears the federal government is seeking to contract more prison beds across the country.

Touchette said he is aware that Immigrations and Customs Enforcement contacted the GEO Group about the North Lake Correctional Facility, where 260 Vermont inmates are currently incarcerated.

A spokesperson for the GEO Group referred comment to ICE about the agency’s “needs and future plans.”

In a statement, an official from ICE said the report “can neither confirm nor discuss negotiations with any facility or organization before an agreement or contract is signed.”

Touchette said the state is “exploring every other alternative that might be available to us.” The Vermont Department of Corrections could establish a different agreement with the GEO Group or could work with a separate company or another state.

Because the state has a small number of inmates, it can be challenging to find an affordable arrangement, Touchette said.

“Vermont is a very small fish in a very big pond,” Touchette said. “We don’t have the buying power that a state or federal branch might have if they’re looking at 1,000 beds.”

Under the current agreement with the GEO Group, the daily rate per inmate would have increased from $61.80 to $64.18 if the contract had been renewed in June, so there was an expectation that the cost would go up. He said it is “tough to say” what the cost of a new contract will be.

“We need to be prepared to see some level of increase in the dollar amount,” Touchette said.

Touchette said it is unlikely, without a significant change in state policy or a substantial increase in community resources, that the out-of-state program could be closed by June 15, when the GEO Group contract ends.

Sen. Dick Sears, D-Bennington, the member of the Senate Appropriations Committee who oversees the corrections budget, expects to see an increase in the cost of keeping inmates out of state.

“I’m hopeful that they’ll be able to get a contract but I’m not sure they’re going to get the favorable numbers that they’ve had in the past,” Sears said.

Lawmakers are considering ways to keep people out of jail, Sears said, but the options are limited. “We’re at a point where it’s harder to reduce those numbers,” Sears said.

Thanks for reporting an error with the story, "Anticipated increase in ICE detainees puts Vermont out of state inmat..."