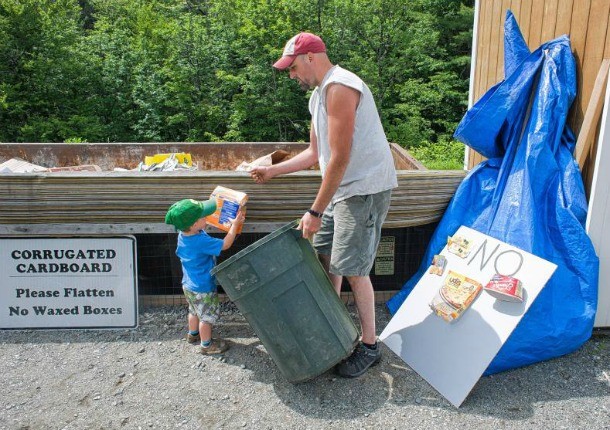 Mike Swift and his son Olin, 2, go to the transfer center in Strafford every Saturday. Their bagged garbage is loaded into a truck to be hauled away. Photo by Medora Hebert/Valley News

[A] report on Vermont’s solid waste shows that more than half of what residents throw away could be recycled, composted or diverted from landfills.

About 28 percent of Vermonters’ solid waste is organic matter, much of which could be turned into compost, according to state officials.

The Biennial Report on Solid Waste says that by 2022, under existing waste-disposal programs, Vermonters ought to be able to cut by about a quarter the tonnage of solid waste sent to landfills. Residents throw away nearly 400,000 tons of refuse each year, and should be able to bring that number down to just over 300,000 tons by 2022.

About 80 percent of what Vermonters don’t currently recycle or divert ends up in a landfill in Coventry. The remaining 20 percent gets shipped out of the state.

Cathy Jamieson, the solid waste program manager for the Department of Environmental Conservation, says it's possible that the state can reduce trash to a little more than 200,000 tons annually.

“Indicators that we have are really positive, as far as what’s happened to date,” Jamieson said. Vermonters threw away 5 percent less in 2015 than in 2014.

She attributes the reduction to the state’s universal recycling law.

The law phases in recycling mandates over time. Transfer stations must offer food scrap disposal facilities and trash haulers must collect food scraps by the summer of 2017. Organic material will be banned from landfills by 2020.

Jamieson says better solid waste management will reduce greenhouse-gas emissions at landfills. Organic waste generates methane as it decomposes in the oxygen-poor environment of a landfill. Methane has been shown to be a more insidious contributor to global warming than carbon dioxide.

Food pantries are also benefitting from increased re-use, mainly by grocers, of produce and other perishable comestibles, also as a result of the new law, Jamieson said.

“Instead of throwing away good-quality produce, that’s going to food shelves,” she said. About 30 percent was used at food banks in 2013, a year after the law took effect, and by 40 percent the following year.

Solid waste managers across the state are working on plans to provide residents with convenient disposal options for recyclables and compostable material.

Bruce Westcott, general manager of the Central Vermont Solid Waste Management District, is in the process of drafting a plan, with several public meetings, beginning in early February. Rural municipalities may seek temporary exemptions from the waste-disposal rules to accommodate trash haulers who may not have access to capital for equipment upgrades needed for organic waste, Westcott said.

Every municipality in the state has developed a “materials management plan" for implementing solid-waste disposal rules, Jamieson said.

Future recycling efforts are likely to take on tires and textiles, the latter of which form a significant portion (as much as eight percent) of what the state buries in landfills each year, she said.

Officials must also address a law requiring proper disposal of mercury used in some older but still common types of switches, Jamieson said. A federal requirement expires this year.

Construction and demolition debris make up one of the greatest challenges the state faces in reducing the size of its solid-waste stream, Jamieson said.

Staffers at the DEC are working with the Vermont Department of Transportation to explore ways of reusing asphalt shingles in road work, she said. But other common types of construction and demolition debris -- such as drywall, plywood and particle board -- remain a challenge for administrators seeking to divert materials from Vermont’s landfills, Jamieson said.

Thanks for reporting an error with the story, "Report: Vermonters could reduce trash by half"