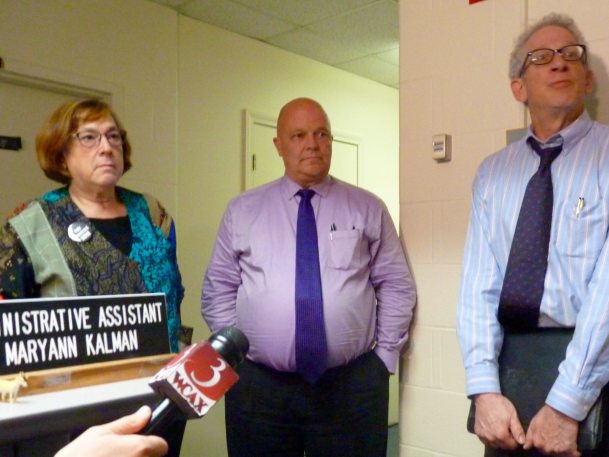 [B]URLINGTON — After close to 10 hours of negotiations the Burlington teacher’s union and the school board reached a tentative compromise that averted a teacher’s strike that was scheduled to begin Thursday.

The two sides would not announce the details of the agreement, and offered no clear timeline for when they would be released. Both union members and school board members must vote to ratify the deal.

Burlington Education Association President Fran Brock said the union would likely vote next week. Burlington School Board Chair Mark Porter did not say when he expected a board vote. Brock confirmed to reporters as the deal was announced that there would be no strike.

Porter and Brock declined to answer further questions at the insistence of the mediator they’ed hired to help hash out a compromise.

The board and the union had been at loggerheads over raises, teacher contributions to health care and reimbursement for graduate courses during more than a year of negotiations seeking to reach a one year contract.

“Nobody’s happy, but at least we’re not striking tomorrow,” said one member of the union bargaining team who would not identify herself as she left the School District Headquarters on Colchester Avenue just before 7:30 p.m. Wednesday.

The two negotiating teams had arrived for the last ditch negotiations at around 9:00 a.m. that morning.

Last month negotiations broke down and the Burlington School Board voted to impose contract terms. Then last week the Burlington Education Association voted to strike starting Thursday if no settlement was reached during Wednesday’s session.

The board imposed contract included a 2.75 percent raise, less than the 3.25 recommended by a neutral fact finder. Board Chair Mark Porter has said that’s what the school district could afford without making further cuts to programs or services.

Parents and community leaders had urged the union and board to reach a compromise in order to avoid a strike, which would complicate the lives of working parents who might struggle to find childcare on short notice.

The two sides spent Wednesday holed up in separate rooms on opposite sides of the school district headquarters on Colchester Avenue. Mediator Ira Lobel shuttled back and forth throughout the day periodically chatting up reporters.

He said it isn’t unusual at this late stage of negotiations for the two sides to be in different rooms, Lobal said.

“There’s some tension. There’s a lot at stake,” he said eight hours into the marathon negotiations, when asked to describe the atmosphere in the rooms where the bargaining teams were huddled.

This was not Lobel’s first rodeo. A veteran of contract negotiations, he said he mediated the last Burlington School District teacher strike in 1979. This time he was able to avoid that outcome.

Lobel said he was that not the only player in Wednesday’s negotiations that was around the table 37 years earlier. Joe McNiel, the school district’s lawyer, was in the same position in 1979, and Brock, the union president, was a Burlington Free Press reporter covering the negotiations and subsequent strike, Lobel said.

School district officials had reached out to parents via a robocall Tuesday night preparing them for the possibility of a strike. The union set up a strike headquarters at an Old North Avenue home and were making preparations to picket.

A scheduled 4 p.m. news conference with BEA President Fran Brock was canceled as negotiations dragged on into the evening.

The acrimony on both sides is likely a preview of what could more fraught negotiations that will have to begin soon, as the tentative contract reached Wednesday will end in July, 2017.

Many public sector unions negotiating contracts that end prior to 2018 opted for short contracts, as the Burlington School District did. That’s because 2018 is when an excise tax on high-value health plans, included in the Affordable Care Act, is expected to take effect.

The excise tax is anticipated to upend the generous health plans many such unions have negotiated for over decades. The purpose of the tax is to make people less insulated from the actual cost of services bought by their employer sponsored health plan.

Brock declined to be interviewed after confirming there would be no strike, but minutes later Vermont NEA spokesman Darren Allen issued a statement on her behalf.

“I am pleased to tell Burlington students, parents and residents that school will begin on time tomorrow morning,” Brock said in the prepared statement. “I know this has been a hard road, but we’re pleased to have reached an agreement with the school board.”

“This is terrific news for Burlington’s students,” the prepared statement continues, “In the end, the board shares the same deep devotion to the city’s children as we do, and our teams were able to reach an agreement that will allow us all to devote ourselves to making our schools even better for all of our students.”

Thanks for reporting an error with the story, "Eleventh hour deal reached by Burlington board, union to avert teache..."