ST. ALBANS — The two major candidates for lieutenant governor split Wednesday on raising the minimum wage, how to care for the mentally ill and whether to legalize marijuana. 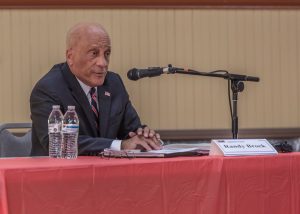 At a forum in Brock’s political backyard, the candidates supported reopening a welcome center in Highgate Springs just south of the Canadian border and spoke of their support for local dairy farmers. Brock lives in Swanton, while Zuckerman represents Chittenden County in the state Senate.

They were also far apart in their view of the role of government, with Brock, a former state senator and state auditor, arguing that government needs to provide a safety net but should “not be a cash register to take care of every need.”

Zuckerman, who has served in the Senate and House a combined 18 years, argued that “we’re all in this together” several times and said the government response after Tropical Storm Irene and its support for families that can’t afford child care showed the value of collective action.

The two also showed a clear difference in philosophy on the minimum wage, which Zuckerman said should be raised gradually to $15 an hour. Brock said raising the wage would lead to inflation and higher prices for goods and services; Zuckerman argued workers receiving the current minimum wage often qualify for government subsidy programs.

Both candidates were wary of a health care proposal recently advanced by the Shumlin administration, a so-called all-payer model, that would combine payments from the federal government. Brock was more adamant and said it was an untested model.

Vermonters “are tired of being guinea pigs in some grand social experiment,” Brock said. 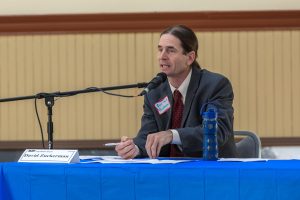 Zuckerman said there were too many unknowns to judge whether the all-payer idea made sense but that it was “worth exploring.” The fee-for-service payment method currently used, he said, was unsustainable.

Both voiced disapproval of a proposed wind turbine project in Swanton. On the larger issue, though, Zuckerman was more supportive of wind energy than Brock, who said the industrial-sized projects were too big, that the developers sold the renewable energy credits out of state and that many of the jobs were not going to Vermonters.

Zuckerman said he didn’t support carving out mountaintops but said the damage was less than was caused by Irene. He noted that he’d supported a controversial proposal to install a turbine on the Burlington waterfront in the 1990s. (After opposition, the turbine was located a short distance from the waterfront, next to the Burlington Electric Department.)

On the issue of mental health, Brock said the state should have built another central facility for the acutely mentally ill after Tropical Storm Irene — which flooded out the one in Waterbury — to “cluster” the doctors and services in one location. Zuckerman said it would be too costly to start over and abandon the idea of more, yet smaller facilities, which he argued may have better outcomes for patients.

On property taxes, Zuckerman argued the system should be more income-based so the wealthy pay more, while Brock said expanding income sensitivity would cost the state more money in refunds. Brock also supported a call by Republican gubernatorial candidate Phil Scott to limit the legislative session to 90 days.

Thanks for reporting an error with the story, "Wages, weed and wind divide lieutenant governor hopefuls"