[M]IDDLESEX -- Lt. Gov Phil Scott said Saturday he will sell his share in a construction company that has done business with the state if he’s elected governor.

The Republican candidate said he will sell his 50 percent interest in DuBois Construction back to the company if he wins in November. His stake will then be divided between Scott’s current partner, Don DuBois, and a new partner, Jeffrey Newton of Barre. Newton owns a trucking business and has been the general manager at DuBois for approximately a year. He will move his trucking business to the DuBois headquarters in Middlesex.

Scott announced the sale at an event celebrating DuBois' 70th anniversary, telling employees, supporters, even competitors that he wanted to keep the company and its employees from continuing to be “dragged through the mud” of the political campaign and to show Vermonters that if he’s elected that the governor’s job would get his full attention.

Scott has been an owner since 1986 and started working at the excavating company as a summer laborer after graduating from Spaulding High School in Barre in 1976.

He told reporters later that agreeing to sell would also remove “the distraction” of claims that continuing to be an owner would be a conflict of interest because of the company’s work for the state. Scott rejected the claim of a conflict, saying the bidding process was open, but he said the perception the company might benefit also triggered the move. He said on average 5 to 10 percent of the company’s business was state contracts.

Critics, including his Republican primary opponent Bruce Lisman, and officials with the Vermont Democratic Party, said Scott’s original plan to put his ownership in a “blind trust” while in office would not remove the concern the business might benefit with him as governor since it would be clear he would still be an owner. (An official with the Democratic Party was asked to leave the company event before Scott spoke.) 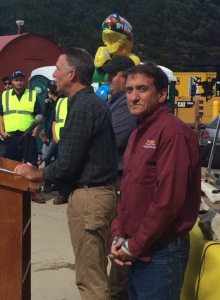 Scott, who is running against Democrat Sue Minter, vowed he would not return to the business as an owner after serving as governor.

“No, I don’t think I would. Hopefully if I’m elected it would be for more than one term and at that point in time, things happen in the business, so I wouldn’t want to do anything to upset that,” Scott said.

Scott said he thought at first a “blind trust” would work, but said he “had to face reality” that the issue was not going to go away, “the tactics of the other side” were going to bring it up.

He added: “I really do think it’s important to restore that faith and trust and I talk about it a lot on the campaign trail,” Scott said. “Sometimes you just have to step up and do it yourself.”

An official with the Democratic Party said Scott should have made the move earlier.

"Phil Scott has refused to offer this assurance for over a year. His announcement was needed and overdue. We look forward to having more details," said Christina Amestoy.

Scott told employees at the company party of paying off his ownership stake in weekly installments over a 20-year period. He admitted later being emotional about possibly parting ways.

“Sure, it’s an emotional time. You put your heart and soul into a business through its ups and downs,” making payroll, paying bills, where’s the next job going to come from, the weather, that anxiety “never goes away and Sunday nights are another sleepless night in this business.”

The company celebration was held at the site of the DuBois company building that burned to the ground in 2012. A concrete slab is all that remains, where Sen. Dick Mazza, D-Grand Isle, served hot dogs, hamburgers and live country music was played. Scott said in his speech that he and Don DuBois could have given up after the fire, but decided to move ahead. He said he frequently looks for a tool or personal item that was lost in the dramatic Friday night January blaze.

After the speech, Don DuBois said he was interested in seeing Scott elected and non-plussed about parting ways as partner. He said Scott had been so busy the last year and with Newton on board as general manager that he didn’t believe Scott’s departure would have much impact on the business. Newton will become a partner whether or not Scott wins or loses the race, Scott said.

Barre Mayor Thom Lauzon attended the ceremony and called Newton “one of the hardest working people I’ve ever met in my life.”

Thanks for reporting an error with the story, "Updated: Scott to sell share in construction firm if elected governor"