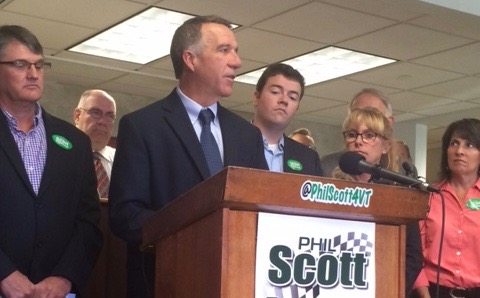 [C]OLCHESTER — Republican gubernatorial candidate Phil Scott laid out a 50-point economic development plan Thursday that he said will put a dent in Vermont’s “affordability crisis” by capping the growth of the state budget, creating more housing and keeping young Vermonters from leaving the state.

Many of the 50 points were goals — not specific proposals — that Scott has outlined during the campaign, including reducing Medicaid administrative costs, finding efficiencies in state government, lowering taxes and encouraging more affordable housing.

He said no analysis had been done on how much could be saved if the 50 points were implemented. When pressed on details, at one point he held up the 39-page glossy handout, including full-page photos, and told reporters to look inside. On another occasion, he was unable to provide any detail when asked about his energy policy.

Scott outlined his themes and touched on a few of the specific points during a news conference at a Colchester fire sprinkler company. He also defended his decision not to participate in a political debate going on at almost the same time.

Scott said he didn’t join Democrat Sue Minter at the WDEV radio debate at the Tunbridge World’s Fair because debate host Mike Smith refused to agree to his precondition that Liberty Union candidate Bill “Spaceman” Lee also be invited. Scott acknowledged he never made similar demands to have third-party candidates included in past WDEV debates in his three terms as lieutenant governor.

“I think it’s unfortunate,” Scott said of the debate controversy. A campaign source said they believed the campaign had a deal worked out with Smith that would allow Scott to participate, but the source said it broke apart when Smith called out Scott on the air for setting preconditions. Smith denied a deal had been made, and Scott said he “wasn’t aware” of one.

At the Colchester news conference, Scott also said he would answer concerns next week that he is a half-owner in a construction company that does business with the state. Scott has promised he would set up a “blind trust” to hold his share, but he said Thursday he would have an announcement at a company event Sept. 24.

Asked whether he was going to sell his half, Scott didn’t say.

Scott said his economic plan is more comprehensive than proposals laid out by Minter or Lee, who has barely campaigned.

“They are not all huge ideas, but if you take each and every one and you put them together, it’s a big deal to Vermont,” he said of his plan. “It shows you’re focusing on the economy. It shows that you have a plan put together so you can move Vermont forward in a positive direction.”

He added: “I think the message is about having a plan and not over-promising and understanding there’s no one big idea that’s going to change the direction of Vermont. We all need to understand that we have a responsibility to first admit we have a crisis of affordability and second what are we going to do about it, and I lay out a plan and I think that’s a pretty big deal.”

Scott cited spending control as his biggest priority and vowed to veto any budget that exceeded the growth of the state economy.

Under the subject of “Progress, Affordability, Opportunity,” Scott also called for improving transportation infrastructure, restoring faith and trust in government, and addressing the opiate addiction problem.

He repeated his call to have Vermont dump the state health care exchange and join the federal exchange or another state exchange and drop the requirement that small businesses have to join. He said the cost to maintain Vermont Health Connect was significantly higher than the cost of joining another exchange.

On protecting jobs and retaining employers, Scott listed points titled “encourage, respect, protect, promote and communicate,” with few details about how those goals would be achieved other than streamlining the permit process and requiring the Agency of Commerce and Community Development to report to him quarterly.

In the last six years, Scott said, the Legislature has increased total state spending by $700 million in taxes and fees, a burden he said amounted to an additional $4,500 for an average Vermont household. That increased spending, he said, does not include increases homeowners have seen in property taxes.

One example Scott gave of a way to boost the economy was restoring the tax credit for film production, noting no movies have been made in Vermont since the benefit was repealed in 2011. Restoring the credit, he said, would cost the state coffers nothing because no revenue is coming in from that source.

He also called for restoring a research and development tax credit the Legislature reduced in 2014. He offered no estimate on what that might cost the state treasury or what it might raise.

Scott concluded the news conference with his promise to address concerns next week of conflict of interest because of his ownership stake in DuBois Construction.

His Republican primary opponent, Bruce Lisman, had hit Scott hard on the issue, saying a “blind trust” would not be sufficient and that Scott needed to sell his share.

“I’ve owned it with my partner now for 30 years,” Scott said of the Middlesex business. It will celebrate its 70th anniversary at the Sept. 24 event where Scott has promised an announcement, which he said made more sense to make with customers and staff there.

Asked if he was going to sell his share, Scott said: “I am going to be making an announcement detailing what I have for plans for the future.”

Thanks for reporting an error with the story, "Scott outlines wide-ranging plans for boosting state economy"

After pandemic pause, Vermont Fourth of July festivities return with a bang