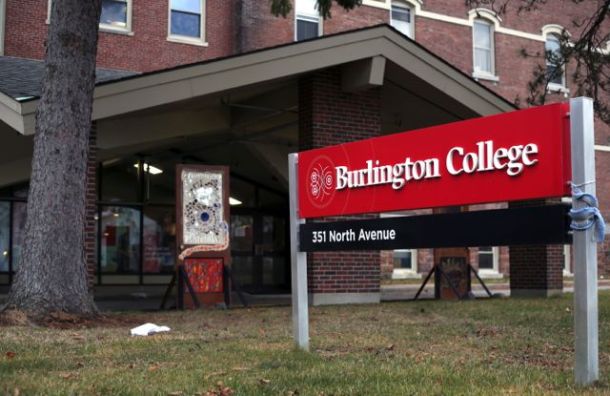 Burlington College, and the former headquarters of the Roman Catholic Diocese of Burlington. Photo by Phoebe Sheehan

BURLINGTON — A man who was arrested in Troy, New York, on suspicion that he was erratically driving a stolen Burlington College van was extradited to Pennsylvania to face unrelated charges earlier this month.

Brett Seglem, 26, has been identified as the primary suspect in a burglary at the former Burlington College property on North Avenue, police said Thursday. The Burlington Police Department reported in July that one or more people broke into the building, vandalizing property, stealing electronics and a van that belonged to the college.

Seglem was arrested July 25 shortly after allegedly driving the Burlington College van into a fence near Knickerbocker Park in Troy, according to the court documents obtained by VTDigger.

An affidavit filed in Troy City Court supporting the issuance of a search warrant for the van provides greater detail on the burglary than has previously been reported.

The affidavit, written by Burlington Police Detective Jeffrey Beerworth, says that police believe the burglar broke in through the building’s rear entrance, which may have been unlocked, as it showed no sign of being forced.

It’s unclear who was responsible for securing the building at that time, but a small number of Burlington College staff were still working to wind down the school’s affairs following its closure in May.

Police recovered the van as well as nearly 20 computers and a number of monitors, keyboards, mouses and external hard drives, said Burlington Police Lt. Michael Warren. The van was repossessed by the insurance company for Burlington College and the electronics were returned to People’s United Bank, according to Warren.

The affidavit also says that school administrators told police that the “main computer server for Burlington College” was stolen, but Warren did not immediately say if the server was among the items recovered. Police believe the van keys were also stolen from inside the building.

In addition, Beerworth writes that school officials told police that documents belonging to Israeli students were stolen, too. Warren said that no such documents were recovered from the van.

A number of interior doors were forced open during the burglary, and offices on all three floors were vandalized. Some computers and other electronics were destroyed, and “water had been poured on some of the computer servers,” according to the affidavit.

The video surveillance system in the building was shut down on July 14, and police determined that “someone had disabled the specific camera cables for the back entrance and the parking lot video feed,” Beerwoth writes.

Warren said it’s unclear if the cameras were disabled intentionally or as the result of the whole system being shut down. He said he would not speculate on whether the incident was well planned or benefited from “dumb luck.”

Police have not established a motive for the burglary and vandalism at the former college building, Warren said.

However, school officials told police they believed whoever committed the crime had “prior knowledge of the buildings layout,” and that there were a number of “disgruntled” students who were upset about how the college was shut down, according to the affidavit.

Though the affidavit says an initial investigation led officers to believe that it was “multiple people with a vehicle” who were responsible for the burglary, Seglem is the only suspect, Warren said.

Burlington Police were not told the suspect was extradited to Pennsylvania until Burlington detectives showed up to interview Seglem at the county jail in Troy.

“It’s frustrating dealing with an incident where the suspect is 15 hours away, and we’re having a difficult time getting assistance from other outside agencies,” the lieutenant said.

A judge did not sign the search warrant for the Burlington College van until Aug. 16, nearly two weeks after New York law enforcement released Seglem from custody.

When Troy police were called by a witness the evening of July 25 about a beige Ford van with Vermont plates hitting a fence, officers located Seglem and three passengers in the area. VTDigger is not identifying the passengers as they have not been implicated in any crime.

One of the passengers told police that Seglem offered to give them a ride from Albany, New York, to Philadelphia, Pennsylvania, and that he had given his name as “Bread,” according to Beerworth’s affidavit.

The correct spelling of Seglem’s name is unclear as police in Burlington and Troy spell it three different ways in the search warrant and affidavit. It’s spelled Brett Seglem, Brett Segler and Brett Seglam in the court documents.

The passenger told police that Seglem got in a “fender bender,” and exited the highway toward Troy. Seglem then began to drive erratically, before running into the fence. He kept driving until one of the passengers started to “choke Seglem in order to make him stop driving,” the document states.

The two other passengers confirmed that version of events. The search warrant and affidavit do not say whether the passengers were arrested, but Troy police logs published on the Troy Record website list Seglem’s arrest, without mentioning passengers.

Warren said he hopes to work with police in Pennsylvania to arrange for Seglem’s extradition to Vermont once police have finished working with the Chittenden County State’s Attorney’s office to finalize charges against him.

Thanks for reporting an error with the story, "Documents shed new light on Burlington College burglary"