[B]URLINGTON — Gov. Peter Shumlin walked a fine line Thursday on controversial drugmaker Mylan — which has recently become the object of derision for the soaring price of its EpiPen — condemning its pricing practices but praising its role as a Vermont employer.

EpiPen is an injection containing epinephrine, which can reopen airways following an allergic reaction. Health Commissioner Dr. Harry Chen described it as a lifesaving drug. 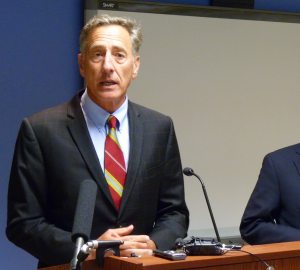 Mylan, maker of the EpiPen, has come under intensifying scrutiny from Congress as its list price has jumped from $100 in 2007 to $600 currently, according to The New York Times.

During an unrelated news conference Thursday, Shumlin weighed in on the controversy, suggesting Mylan was just hewing to market forces in an industry whose practices he’s long decried. He also praised Mylan for its work in Vermont.

“We need to remember that Mylan is a great employer in Vermont, and they have very dedicated employees in St. Albans who are making some innovations that are critical to Americans’ health care,” Shumlin said.

“I also think it’s fair to say that Mylan, and every other pharmaceutical industry that I know about, is ripping off the American people, and they will do anything for profit, and this is yet another example of how broken the system is,” he said.

“I agree with Sen. (Bernie) Sanders and so many others that it’s time for Congress to figure out a way to stop having the American people make horrid, horrid choices between food on the table, sneakers for the kids and getting the lifesaving devices like EpiPen that we need to stay alive,” Shumlin added.

Pressed by reporters, Shumlin said he would communicate his concerns about Mylan to Bresch, the CEO. However, Shumlin said he does not regret the millions of dollars in state support provided to Mylan for the purchase of its St. Albans facility.

“Mylan has been a great corporate partner to Vermont, and when we had an opportunity to help rebuild downtown St. Albans, and had them expand jobs, over 100 high-paying jobs in Vermont, I continue to welcome them,” he said.

Shumlin said he spoke with Bresch after Mylan cut 60 jobs in St. Albans earlier this year — 10 percent of its workforce — and said he was told the cuts resulted from expiring patents.

Thanks for reporting an error with the story, "Shumlin jabs controversial drugmaker but holds off full punch"