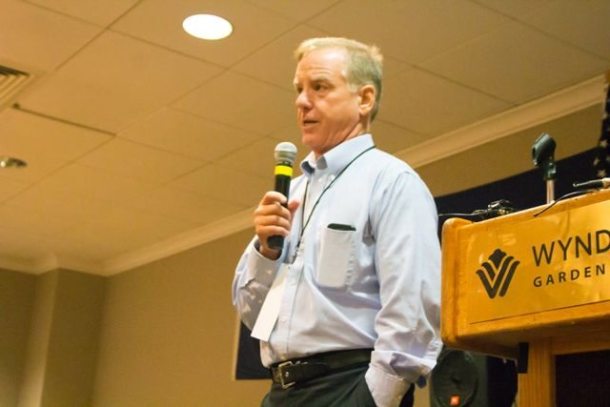 Dean, a former presidential nominee, was one of several Clinton backers who emphasized the need for party unity at a breakfast with delegates on Tuesday.

“I’m well aware that this is Sanders country,” Dean told the delegates.

Dean thanked Sanders backers for bringing progressive causes to the forefront of the Democratic Party.

But he also urged the audience to look beyond Sanders by alluding to “not me, us,” a common Sanders campaign slogan. “I’ve always said, and he (Sanders) said too, that our campaigns were not about us, they were about you,” Dean said.

“When he (Sanders) began, there were people who were dispirited and who didn’t think they could change anything,” he said. “And because of Bernie, and because of your response, he has unlocked the power each one of you has to make fundamental change in this country and we cannot give it up.”

Dean praised Clinton for changing her positions, to address concerns about Clinton’s trustworthiness among Sanders supporters. “She’s not particularly ideological, but she cares what the facts are and if the facts don’t match on a position she takes, she’ll change her position,” he said.

“Politics is a game of inches,” he said. “Politics is a substitute for war — you’re not going to win it in a single shift. But you will never win it unless you put your nose to the grindstone and make advancements.”

Dean’s words were well received and many in the crowd gave him a standing ovation. But other speakers who followed faced an increasingly agitated audience. When Raymond Buckley, chair of the New Hampshire Democratic Party, took the stage he spoke about the importance of union alliances.

A woman in a blue Bernie T-shirt yelled out: “Single-payer is our greatest issue.” The exchange quickly turned sour when the woman yelled, “You’re not going to condescend me, sir.” And turned her back to him for the remainder of his time on the stage.

When Sen. Jeanne Shaheen, D-New Hampshire, spoke, a woman in the crowd asked about the Trans Pacific Partnership. When Shaheen said she will read through the terms of the TPP, she received a glare and a “we hope so” from one woman.

Clinton supporters in the crowd countered with “let’s elect a president” and an exasperated “come on.”

Sanders is expected to speak to the delegates tomorrow morning.

Thanks for reporting an error with the story, "Gov. Howard Dean presses New England delegates to unite behind Clinto..."