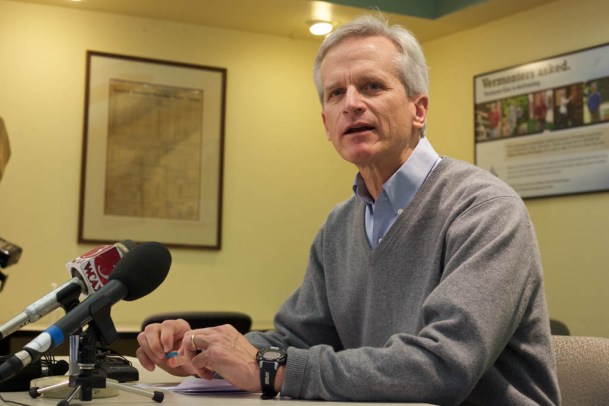 Don Rendall, president and CEO for Vermont Gas, announced a cost increase to build a natural gas through Addison County at the company’s South Burlington headquarters in December 2014. Photo by John Herrick/VTDigger

It’s the fourth time Vermont Gas has upped the price tag. The company, a subsidiary of Montreal-based Gaz Metro, originally told state regulators that the cost of the project would be $87 million.

Vermont Gas is seeking permission from state regulators to increase the cost and filed a letter with the Vermont Public Service Board on Tuesday explaining why the project is running over budget. Company officials say most of the additional money would be for unexpected construction costs. Vermont Gas will submit more detailed filings with the board in mid-July.

The company says about $4.5 million of the additional costs are due to unanticipated construction costs for the pipeline. Of that amount, $525,000 is due to “interference” from protesters and eminent domain proceedings. The remaining $5.6 million is for a contingency fund.

Don Rendall, the CEO of Vermont Gas, says contractors for the company have had to blast more rock and ledge in the right of way corridor than anticipated. It has also been more expensive than anticipated to drill around environmentally sensitive areas, he said.

Last October, the Department of Public Service entered into an agreement with Vermont Gas that capped ratepayer liability for the project at $134 million. About 50,000 ratepayers in Chittenden and Franklin counties are subsidizing the pipeline, which will serve about 3,000 customers in Addison County.

“My top priority to customers is finishing the project and protecting customers from higher costs,” Rendall said in an interview. The Vermont Gas CEO says customers should not be liable for the risks associated “with a challenging and complex construction project in two counties, eight towns across 41 miles.”

“I’m very pleased the cost cap is in place and that we, Vermont Gas, will bear the responsibility for costs, not customers,” Rendall said.

Chris Recchia, the commissioner of the Department of Public Service, says ratepayers, for the most part, will not be liable for the cost overruns. “Boy, am I glad that we entered into that $134 million cap,” Recchia said. The agreement he said was “visionary.”

The memorandum of understanding between Vermont Gas and state regulators comes with certain loopholes for the company. Ratepayers, for example, must pay for delays caused by demonstrations and pushback from landowners. At this juncture, those costs are an additional half million dollars. 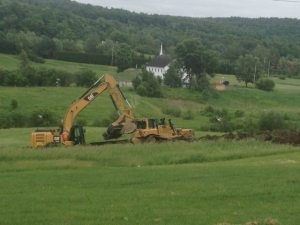 “Their agreement with the Department of Public Service left loopholes you could drive a truck through,” David Reville, communications director of the senior citizen group. He said Vermont Gas can pass along “unavoidable delays” associated with land acquisition and protests.
“We don’t feel ratepayers should bear those costs.”

Reville questions why the company couldn’t better manage costs. “The department needs to do its job and closely scrutinize the effort,” Reville said. Ratepayers in Chittenden and Franklin counties are paying for the pipeline expansion and get no benefit, he said. The benefit, Reville said, goes to Vermont Gas’ bottom line. “We don’t think that’s fair to our members or to ratepayers,” he said.

Recchia, the department’s commissioner, says the company is within its rights to charge for delays caused by demonstrators and lengthy right of way delays. “People knew it would add to the cost,” Recchia said.

Contractors with Wisconsin-based Michels Construction began building the pipeline on June 6, and JM MacDonald has been preparing the right of ways. About 200 workers are in the field, Rendall said.

Meanwhile, two landowners — the family of Claire Broughton and the Town of Hinesburg — are fighting Vermont Gas eminent domain proceedings. The company plans to build around the two properties until the Vermont Public Service Board makes a decision in the proceedings this fall. Vermont Gas plans to finish the pipeline by the end of the year.

“We will continue to work with the Broughton family and Hinesburg to achieve resolution,” Rendall said. “It is important to have access to the parcels early this fall.”

Recchia said it’s hard to imagine that the Public Service Board would block the eminent domain proceedings for the two parcels when 200 other landowners have already agreed to allow the pipeline on their properties. The board will determine if the two properties are needed, and if Vermont Gas and the landowners can’t agree on a price that issue would be taken up in a separate proceeding, Recchia said. 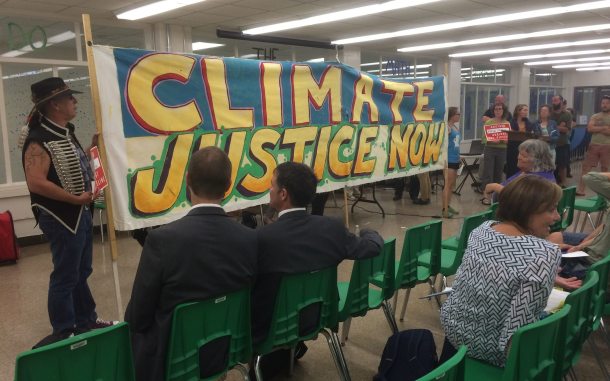 Thanks for reporting an error with the story, "Vermont Gas pipeline costs jump 7.8 percent to $165.6 million"