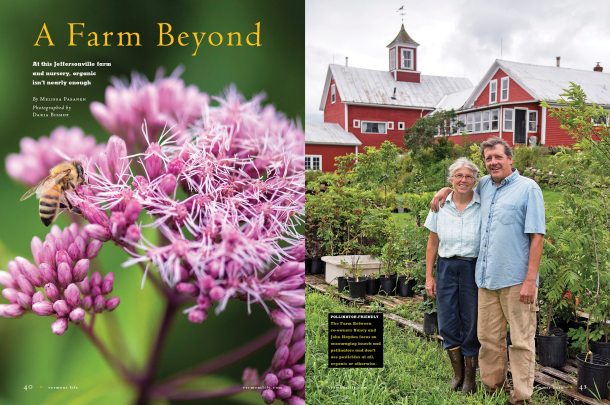 A spread in the summer issue of Vermont Life.

While the glossy pages of Vermont Life magazine depict scenes of natural beauty, delicious food and thriving businesses, the economic reality at the state-owned and -operated publication is less rosy.

The magazine has accumulated a deficit of $2.8 million over decades, half accrued over the past three years, with the hole expected to grow by $200,000 this year.

The tough numbers are being attributed to several factors, including the advent of the Internet. In recent presentations to legislators, Editor Mary Hegarty Nowlan acknowledged that print ad sales are down, as are sales of the magazine’s calendars. Negotiated state employee contracts have also brought increases in benefits and salaries for the publication’s eight employees.

The situation prompted Sen. Richard Westman, R-Lamoille, to insert a section into this year’s budget bill calling for a major reassessment of the 70-year-old magazine’s operations, which are housed at the National Life Group building.

The language calls on the governor’s administration and the secretary of the Agency of Commerce and Community Development to jointly review the magazine’s operational model. The agency is also tasked with proposing “a plan to eliminate the operating deficit within two fiscal years.”

“The first step that needs to be taken is to figure out a way to operate where you aren’t adding to that deficit every year,” Westman said.

He suggested that if the deficit cannot be controlled, the agency should take the second step and absorb the magazine’s annual shortfalls into its own budget instead of relying on state appropriations. The magazine, with a $2 million annual budget, is an arm of the Department of Tourism and Marketing, which is part of ACCD.

Westman said that in a time of budget constraints and cuts to meaningful social services, it’s hard to justify spending millions to keep a magazine running. He suggested a private entity could better manage the magazine and said he expected a number of bids if the state put out a request for proposals.

“I’m worried we are clinging to a vehicle of the past,” Mullin said. “When national magazines can’t make a go for it, you have to wonder if it’s really worth the subsidy that’s required to keep it afloat.”

Mullin said he thought private management could find efficiencies within the magazine, but he added that the money lost now might not justify a future for Vermont Life.

“There’s times that you just have to cut your losses and realize that it’s probably never ever going to break even,” Mullin said. “I would say it’s probably time to pull the plug.” 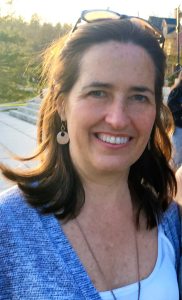 But Vermont Life’s leadership and defenders argue that the magazine brings a number of tangible benefits to the state.

In a recent survey of the magazine’s readers, 67 percent said they bought a Vermont product specifically as a result of reading Vermont Life. Fifty-six percent said they tried a new restaurant, while 44 percent planned a vacation.

According to the survey, the magazine’s portrayal of the Green Mountain State even persuaded 6 percent of readers to buy real estate here.

In total, the magazine brings in $33.5 million annually to the state in the form of dining, lodging and real estate spending, plus associated taxes, according to Nowlan. She said an additional $103 million is brought in annually through property taxes associated with home purchases by people who discover the state through Vermont Life.

She said the magazine’s annual cost, plus the accrued debt, is a small payment for the economic stimulation the magazine generates.

“I do believe that the state needs to once again view us as a valuable marketing tool and help pay for us through an appropriation,” Nowlan said.

Nowlan acknowledged that even if the state appropriated $2.8 million to pay off the deficit, the magazine would continue to run in the red in future years. “Short of some new revenue stream that we have not thought of yet, we would need an annual appropriation,” she said.

The magazine began in 1946, and its founding statute focused more on state promotion than making money. It received state funding throughout its first 30 years.

Although the publication’s shortfall is large, Nowlan said the magazine has instituted a number of cost-cutting measures since she took over eight years ago. The staff has been reduced since 2007, going from 14 full-time and two part-time workers to eight full-time employees. In addition, costs for shipping, printing and paper have dropped.

The magazine has also seen a 14 percent rebound in circulation over the last two years after two decades of decline. The average age of Vermont Life readers has also dropped from 68 to 55, Nowlan said. She plans to continue working to attract younger people to the magazine to entice a new generation to the state.

“Vermont is poised right now to be the new American dream for millennials,” she said. “We have what people want, and the magazine can get that message out.”

The magazine has seen a few bumps during Nowlan’s leadership, including anemic ad revenue under a previous sales team.

“They weren’t even seeking out advertisers in the Stowe area,” Mullin said of the last team. “Obviously there are some problems.”

The team of part-timers has since been replaced by veteran ad man Chris McGee, whom Nowlan said she has more confidence in.

The fact the magazine is state-owned also makes it difficult to cut costs. While printing is cheaper in Canada, for example, the magazine is printed in Vermont to comply with state contracting rules.

And although the publication has an online presence, legislators think it needs to be strengthened. The viewership of Vermont Life’s online magazine, Nowlan acknowledged, is not as strong as it could be.

“I think there are some more innovative ways that they might be going about growing that online side,” said Sen. Philip Baruth, D-Chittenden, who is the vice chair of the Senate Committee on Economic Development. “They should be able to make some more dramatic moves in that direction.”

While unsure of exactly how to shrink spending further, Leriche said the agency will re-evaluate the magazine’s model, including operational expenses.

She also said the new ad staffer, McGee, will likely increase ad revenue, and she pointed to recent instances of the magazine performing design services for other state agencies, including the Department of Fish and Wildlife, as a source of revenue.

On the size of the magazine’s payroll, Leriche said that “we really are down to essential core staff. I don’t see any opportunity to contract out any more.”

Leriche said a recent Seven Days article about the magazine prompted two entities to reach out about managing it should the state request bids. 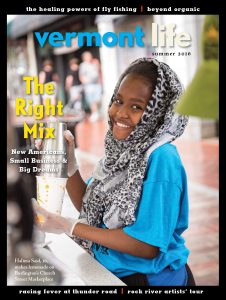 The summer issue of Vermont Life.

Leriche would not name the two interested managers, though Adam Howard, a former legislator who now edits Backcountry Magazine in Jeffersonville, said he was one of the people who reached out.

“In terms of our business publishing it, that is highly unlikely,” Howard said. “But I would sooner get involved than watch it die, because as a seventh-generation Vermonter I see that it has a lot of value.”

Howard said the magazine has been unfairly targeted by the Legislature, though he added that outside management could help shrink the deficit. “If they brought in some people who knew what they are talking about, I think they could find solutions,” he said.

It isn’t clear who the other entity was that reached out.

Seven Days hasn’t inquired about managing the magazine, though Publisher Paula Routly said, “If (a request for proposals) went out, I guess I’d take a look at it.”

Although a number of legislators are demanding a re-evaluation of the publication’s economic model and management, there remains a strong belief under the golden dome that the magazine effectively markets the state.

“I think the magazine can be a great tool,” Westman said after his strong critique of the operational costs.

“I think people are very curious about our brand, what we stand for and our values,” Botzow said. “We’ve got to move the message towards them, and with the right expertise and platform we can get those stories out.”

Similarly, Baruth said he has always been a big supporter of Vermont Life because of its ability to promote the “incalculable power of the Vermont myth.”

“We have a very crucial place in American myth, and part of that is because you have outlets like Vermont Life who are dedicated to telling the story of Vermont and keeping that place alive in the minds of people in and out of the state,” Baruth said. “I think it’s a valid concern that they are running a deficit, but I don’t think getting rid of the magazine should be on the table. The question should be: How do we make it stronger?”

Thanks for reporting an error with the story, "Deficit has state taking a hard look at Vermont Life’s support"

VTrans launches campaign to keep trucks out of Notch