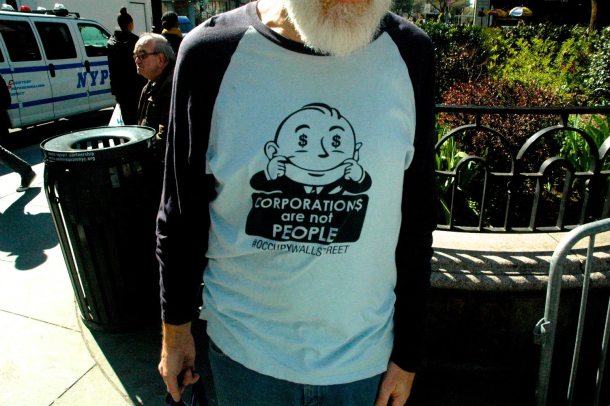 [N]EW YORK — In the middle of Union Square on a sunny afternoon, three gray-haired men are protesting oligarchy.

The ragtag crew of elders first met in 2011 while demonstrating in Zuccotti Park as members of Occupy Wall Street. Amid a movement of mostly young people, these three far-from-youthful radicals quickly made lasting bonds, and they say they’ve been protesting on and off ever since.

“We were in the belly of the beast during Occupy, which is where Hillary is getting her money, from ‘Goldman Sucks,’” says Bob Lindgren, 62. “This woman is never going to represent the people. Never, never. She’s owned by the billionaires on Wall Street.”

Two miles north of Wall Street, the activists’ work this week is to stand on the streets and decry Hillary Clinton’s donations from Wall Street, the unbridled power of billionaires and the scourge of income inequality.

The men say they have been in and around Greenwich Village for four days so far, urging New Yorkers to vote as members of the 99 percent and support Bernie Sanders.

Wednesday they started at 6 a.m., picketing in solidarity with Verizon workers demanding better treatment. The three say they will continue getting the message out until the primary on Tuesday, as long as the weather stays nice and stamina allows.

“It takes me a heck of a long time to get into the city,” says Chuck Helms, a 69-year-old retired union electrician from New Jersey. “Plus, I can hardly walk.”

Helms adds that the blood thinners he takes also make it hard to be in the cold for long periods of time.

“But we gotta bring down the banks on Wall Street,” he says.

The three hold signs, blow whistles and dance. Dozens of people have snapped pictures of them or talked politics, Helms says. They urge passersby to vote for the democratic socialist, and they say many people have given them a thumbs up. 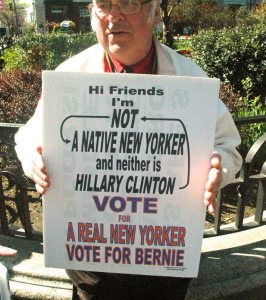 The men are of the same generation as Sanders, who is 74, and they all speak about the civil rights movement of the 1960s and ’70s with the same sweet nostalgia as the Vermont senator.

References to radical linguist Noam Chomsky are frequent, as are stories about the “good ole’ days” when unions were strong and young people railed against war and injustice.

While the men say they believe strongly in the Vermont senator, they acknowledge that on a number of issues they skew to his left.

Lindgren rails against Clinton’s daughter, Chelsea, claiming her charitable work is phony and that she is just as greedy as her mother.

“Humanitarian? Really?” Lindgren says. He then points uptown in the direction of Chelsea Clinton’s New York abode, a $10 million apartment in Manhattan that stretches an entire block.

“She’s got a whole floor between Park and Madison (avenues),” Lindgren continues. “If she is a humanitarian, then chop it up into apartments for the homeless.”

One of the men, Jack, is so skeptical of government surveillance and power that he refuses to give me his full name or age. He has a vintage FDR sticker on his hat, and he tells me to visit his crudely made political website, www.OccupyRUs.com.

A minute later he adds: “We waited for the messiah, and Bernie Sanders is Occupy Wall Street’s messiah.” 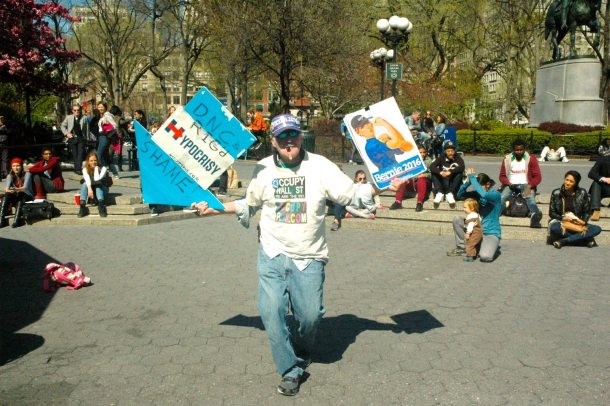 A former Occupy Wall Street member who would identify himself only as Jack dances in Union Square in New York in support of Bernie Sanders. Photo by Jasper Craven/VTDigger

Sanders has built his core campaign message from ideas and slogans in common with the Occupy movement, and he peppers every appearance with rhetoric made popular by the movement.

During Sanders’ opening statement in Thursday’s CNN debate, for instance, he said his campaign was “determined to end a rigged economy where the rich get richer and everybody else get poorer, and create an economy that works for all of us, not just the 1 percent.”

As Sanders campaigns feverishly for a win in the Empire State primary Tuesday, he has found a supportive audience from former Occupy members and sympathizers.

At a Sunday rally in New York’s Prospect Park, Jumaane Williams, who serves as a city councilor for Brooklyn, asked the estimated 28,000 people in attendance: “Are any occupiers in the house? Occupy Wall Street?”

Williams’ question was greeted by an eruption of loud applause: There were occupiers in the audience.

Besides the voters, there are a large number of former Occupy organizers working in both official and unsanctioned roles in New York and around the country organizing for Sanders.

Winnie Wong, a founding organizer of Occupy Wall Street, and Occupy veteran Stan Williams both work for the high-profile People for Bernie organization, which has been helping the campaign with canvassing and phone banking.

On Sunday, People for Bernie announced it had helped organize 3 million calls to New York voters over the weekend.

The organizers also held a pro-Bernie march in Manhattan over the weekend attended by thousands, and activists have been handing out a special issue of the Occupied Wall Street Journal to crowd members aimed at energizing liberals.

The top headline in the radical paper reads: “Coronation or Election: You Decide!”

Jose Martin, 34, was a prominent Occupy activist who now supports and organizes unofficially for Sanders. He said the democratic socialist’s campaign has persuaded him and many other radicals to enter electoral politics for the first time.

“There are people who feel a tremendous sense of hope and feel this rising tide of political and social change through the energy of Sanders,” Martin said. “We actually have somebody who is a real contender who would listen to the people, and the protesters.”

The Sanders campaign openly welcomes the support of Occupy members and acknowledges similarities in rhetoric between the movements.

“The Occupy Wall Street movement showed there is a tremendous appetite for a progressive, people-driven message that puts working families first,” said Sanders spokesman Karthik Ganapathy. “It was the first time folks saw that a message like that could resonate, and what Sanders has been able to do is take it from a smallish thing and make it into a nationwide movement for change.” 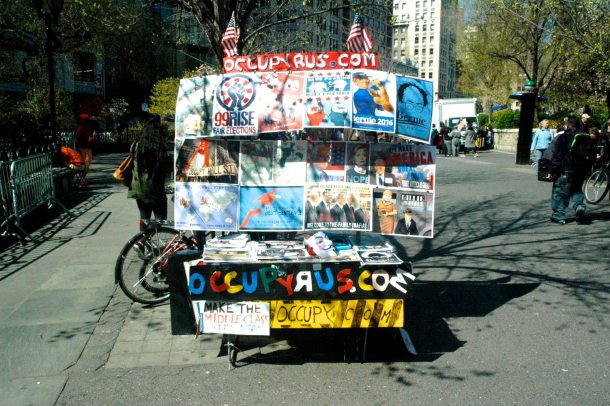 A table of political slogans and endorsements is set up in Union Square in the week leading up to the New York primary. Photo by Jasper Craven/VTDigger

Thanks for reporting an error with the story, "In NYC, Sanders has the occupied grandfathers pulling for him"