[A] suspected carcinogen being found in hundreds of locations around Bennington County has not been detected in maple syrup produced in the area, Department of Environmental Conservation tests revealed Wednesday.

The toxicant PFOA has been found in sediment beneath several water bodies in the area, however, at concentrations of up to 2,400 parts per trillion. Results released Wednesday also showed dozens more residential wells containing the chemical at levels exceeding the state’s advisory limit of 20 parts per trillion. 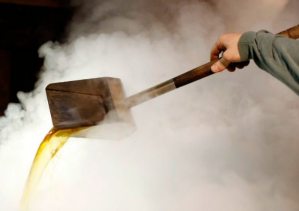 The state’s 20 parts per trillion advisory limit is set for concentration levels in water, and does not apply to sediment.

The department still awaits results from about 100 soil samples in the North Bennington area, as well as from sites near 11 industrial locations around the state.

Officials say that although Walloomsac River sediment showed the highest concentrations of perfluorooctanoic acid, the fish in the river are still safe to eat. The pollution doesn’t endanger the health of aquatic species, either, officials say. Experts say the most sensitive aquatic species aren’t harmed by sediment containing less than 10 million parts per trillion, according to Danika Frisbie, the DEC’s public information coordinator for the state’s PFOA response.

State officials Wednesday collected fish from affected water bodies to test their tissue for PFOA as a precautionary measure, Frisbie said. She said the fish aren’t expected to contain noteworthy PFOA levels because the toxin doesn’t accumulate in species the way other pollutants do, such as the polychlorinated biphenyl polluting the Hoosic River and rendering fish from there unsafe to eat.

At least two ponds in the North Bennington area also contain PFOA in their sediment, according to test results released Wednesday, but state officials say it’s not a risk to human health.

Samples from eight out of 10 streams and ponds in the Bennington area also recently came back positive for PFOA, as have wells serving over 100 households near North Bennington.

The pollution is thought to have originated from three factories formerly owned by the same Vermont entrepreneur, John Ransom Cook. Cook started Warren Wire in Pownal and Chemfab in Bennington, which he later moved to North Bennington.

Officials have not yet determined by what precise route the chemical left the factories and found its way into Vermonters’ drinking water and surface waters. But at other PFOA-contaminated sites in the United States, the chemical was introduced into the environment through factories’ smokestacks, according to DuPont documents released in the course of a successful lawsuit against that company over PFOA pollution in West Virginia.

Environmental Conservation Commissioner Alyssa Schuren said her department will require Saint-Gobain to remediate any sites polluted by PFOA released from the Chemfab plants. The company is reviewing hundreds of boxes of documents from the former factory in search of information that might assist the state in its investigation, officials say.

PFOA is believed to cause cancer and disrupt endocrine systems, affecting the liver, kidneys, testes and bladder. It is also thought to cause hypertension and high cholesterol.

Blood testing is available for residents whose water was contaminated, as is clean drinking water.

The state has asked Saint-Gobain to pay to extend municipal drinking water lines to Bennington and North Bennington households whose wells have been contaminated by PFOA, Frisbie said, but the company has not yet responded.

The state will hold informational meetings on PFOA, its effects and where it’s been found Monday evening in Bennington and Tuesday evening in Pownal.

Thanks for reporting an error with the story, "Maple syrup not affected by PFOA contamination, tests show"