[S]en. Patrick Leahy will vote for the Democratic presidential candidate who has the most pledged delegates when they arrive at the convention this summer in Philadelphia.

That’s according to Leahy’s campaign press spokesperson, Carolyn Dwyer, who said Vermont’s senior senator has not changed his position, but was not clear when previously discussing how he would vote as a superdelegate.

“There’s been confusion,” Dwyer said Tuesday. “He was not clear, and people interpreted freely.” 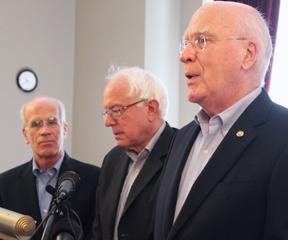 Sen. Patrick Leahy, right, has declared his support for Hillary Clinton over Bernie Sanders in the presidential campaign. File photo by Taylor Dobbs/VTDigger

Leahy is a supporter of Hillary Clinton. This week, he and three other Vermont superdelegates who support Clinton have come under pressure to back Vermont’s Sen. Bernie Sanders at the national convention because Sanders won a lopsided victory in the Vermont primary.

Leahy has refused to budge, saying that as a superdelegate he can vote how he chooses and that he supports Clinton.

Dwyer claimed no one actually asked Leahy how he would vote as a superdelegate, though press reports indicate otherwise. She said he intended all along to vote for the candidate with the most delegates coming in. She said it is typical at a convention for the superdelegates to “line up behind” the nominee with the most pledged delegates as a show of party unity.

Sanders has said superdelegates should follow the will of the voters in their states. An advocacy group, Rights & Democracy, has called on Leahy, Gov. Peter Shumlin, former Gov. Howard Dean and party committeewoman Billi Gosh to cast their superdelegate votes for Sanders at the convention because of the 86 percent support Sanders received in the Vermont primary.

Media reports frequently tout Clinton’s lead and include the superdelegates who have stated their public support for her, though recently The New York Times has separated the pledged delegates from the superdelegate tally.

Dwyer said there are two separate issues: The first is Leahy’s “personal” support for Clinton. That, she said Tuesday, has not changed.

The second issue, Dwyer said, is whom Leahy will vote for as a superdelegate at the July convention. She maintained he was never asked that specific question.

Dwyer said Leahy had planned all along to support the candidate with the most pledged delegates.

She downplayed the “confusion,” saying roughly 85 percent of the delegates came from the primaries and caucuses and that superdelegates made up the remaining 15 percent.

“The pledged delegates will decide this,” Dwyer said.

Ilya Sheyman, the executive director of MoveOn.org Political Action, praised Leahy and urged all superdelegates to follow his lead in supporting the winner of the most pledged delegates.

“Party insiders should never control the outcome of an election, and the party’s base will not tolerate any anti-democratic efforts by superdelegates to thwart the will of the people,” Sheyman said. “We applaud Sen. Leahy for putting country and party ahead of personal preferences and urge all 719 Democratic superdelegates to do the same.”

Thanks for reporting an error with the story, "Leahy’s superdelegate vote could go to Sanders, says aide"