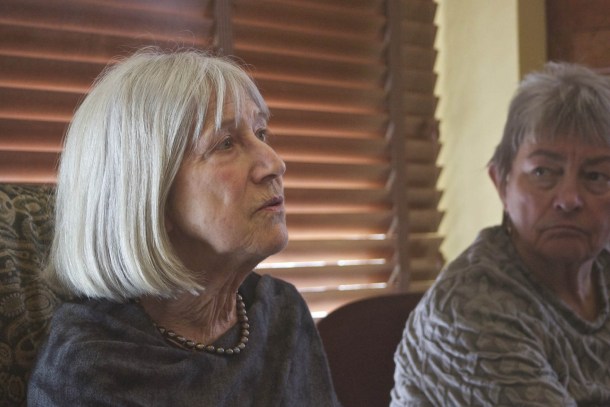 Rep. Janet Ancel, D-Calais, chair of the House Ways and Means Committee, said on Wednesday the committee will give final approval to the water quality bill, H.35, with funding by Thursday. Photo by John Herrick/VTDigger

[T]he Vermont Legislature’s tax writers are seeking broader oversight and evaluation of a controversial program designed to spur job growth in Vermont, despite lobbying by the Shumlin administration to leave it alone.

The House Ways and Means Committee is proposing various changes to Vermont law that would give the Legislature more oversight over the Vermont Employment Growth Incentive, or VEGI, program. The debate comes as the VEGI program is set to sunset in 2017.

The Shumlin administration has asked to have the sunset language removed entirely, or, at the very least, extend it for five years. The program, which offers tax rebates to companies that create jobs, started in 2006 to replace a dysfunctional program, called the Economic Advancement Tax Incentive, which was passed to spur job growth soon after Vermont passed the Act 60 education law.

The House Commerce Committee has proposed to extend the VEGI program for 10 years as part of this year’s umbrella economic development bill, H.868. The committee also wants to re-write the law in plain English under a portion of Vermont law that deals with community development, instead of the portion that deals with taxes.

But the Ways and Means Committee is cracking down harder. The committee is working on an amendment to H.868 that would extend the program for just three years; require the Joint Fiscal Committee to approve any changes to the program during the off-session; and move the clarified VEGI language back under the umbrella of Vermont’s tax law.

The committee is also considering language that would require the state auditor to do an in-depth review of the program, its cost, and its effectiveness, and present findings to the Legislature by the end of 2019—a year before it would be set to expire under the committee’s amendment.

Rep. Janet Ancel, D-Calais, the chair of House Ways and Means, said she would submit new language regarding a review later in the session. But she said her committee’s priorities are oversight and evaluation of VEGI, which she called Vermont’s “premiere economic development tax expenditure.”

“I think the amendment we’ve got is successful in improving oversight,” Ancel said. “No matter what we want the three-year sunset so that we’re forced to do the evaluation.”

The VEGI program works like a tax rebate program. A company must apply to get cash from the state. If the Vermont Economic Progress Council, an independent board, determines that the company is planning to do something that creates jobs that would not exist without the state money, the company is approved for VEGI.

Companies tend to be manufacturers, and they are generally approved for five years of incentives at a time. During that time period, the Tax Department creates a withholding account for the company to keep the company’s VEGI money separate from its tax payments. The VEGI money is refunded to the company annually when the company proves it has created jobs.

Under state law, the Vermont Economic Progress Council is limited in how much money in tax rebates they can give out each year. In 2015, the council and the Shumlin administration sought to eliminate those caps completely. The Senate negotiated language that said the Emergency Board would have to approve any changes to the caps. It did so this winter.

The amendment from House Ways and Means would also make sure that the Joint Fiscal Committee—which does not include the governor—would have to approve any changes that the governor recommends. It would also direct the committee to decide whether to approve the proposed change based on “the economic and fiscal condition of the state.”

Patricia Moulton, the secretary of the Agency of Commerce and Community Development, opposes many of the Ways and Means proposals. She said the governor should remain in the decision-making process, and she is resisting current language to require an audit of the program.

“The program’s been audited four times already in its seven-year history,” Moulton said. “I’m not really seeing the need to request an audit since they seem to be happening with some regularity anyway.”

Moulton called VEGI a tightly-controlled “proven program to be able to deliver job creation. … It’s a great program that’s working well, and if we’re serious about job creation, we need to have this tool in the toolbox.”

The bill, H.868, is scheduled to come up on the House floor Thursday.

Thanks for reporting an error with the story, "Tax writers want more oversight of VEGI program"