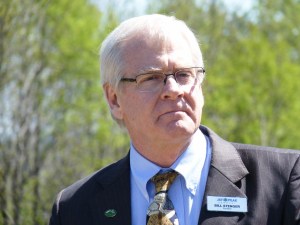 Bill Stenger is an owner of Q Burke Mountain Resort in the Northeast Kingdom.

Q Burke Mountain Resort announced Monday that the ski resort will lay off 180 workers at the end of March.

Andy Barter, a human resources contractor for the resort, said the reduction in force includes 45 year-round employees at the new 116-unit Q Burke Hotel and Conference Center, which has yet to open. The Vermont Department of Labor’s rapid response team will be providing assistance to affected workers at the base lodge March 30.

Several other ski areas in Vermont have also closed early because of the unseasonably warm weather, and it is typical for ski areas to lay off seasonal workers in the spring.

Barter said in an email that Q Burke will retain a core group of 20 employees and “increases will of course occur with summer bike and campground operations, with the launch of the 2016-17 ski season, and with hotel operations when possible.”

The company, according to the news release, is “looking carefully at cost-cutting and cost-containment measures.”

Winter season operations will end Sunday, and after that, Barter said, the resort will not offer food and beverage service.

In a news release, resort officials blamed the layoffs on the warm weather and lack of snow this past winter season and “with difficulties associated with the opening” of the Q Burke Hotel and Conference Center.

Those difficulties have centered on payment for the construction of the hotel.

The $50 million hotel, which was supposed to open Dec. 11, has been mired in a dispute over payment among the state, the owners, Bill Stenger and Ariel Quiros, and PeakCM Construction, which recently finished building the facility.

The $50 million hotel is part of a $120 million overhaul of the Q Burke Mountain Resort in the Northeast Kingdom. Bill Stenger and Ariel Quiros are using EB-5 immigrant investor funds to transform the once-sleepy local ski area into a bona fide resort with a new hotel and conference center, an Olympic-sized aquatic center, indoor and outdoor tennis center and a mountain biking center.

Q Burke is part of a $545 million development initiative that includes a redevelopment of Jay Peak Resort and the construction of a biotech plant in Newport.

The projects are funded through the federal EB-5 visa program, which allows foreign nationals to invest $500,000 (plus $50,000 in administrative fees) in exchange for a green card and eventual permanent residency. Investments under the EB-5 program must be placed “at-risk” in order for immigrants to qualify for permanent residency. That means return of investment is not guaranteed. The U.S. Customs and Immigration Service requires that each investment result in the creation of 10 jobs.

In Vermont, the immigrant investor program is run by the Vermont EB-5 Regional Center, which is part of the Agency of Commerce and Community Development. The Department of Financial Regulation was asked last year to conduct a financial review of the Q Burke and AnC Bio projects.

The hotel was funded with money from immigrant investors via the federal EB-5 visa program. In July, the state required the owners to put new immigrant investor funds in escrow, and the money cannot be released for construction payments without state approval.

Both Jerry Davis, principal and president of PeakCM, and Stenger have said the state has delayed approvals of construction costs.

As of December, the owners had collected money from 103 investors, or about $56.65 million in EB-5 foreign investor funds and fees, according to state documents.

In a swipe at the state, resort officials said in the news release announcing the layoffs that “Q Burke Mountain Resort has worked diligently to create jobs and to retain personnel even through rough times, however, job creation, job retention, and economic development do not seem to be as important to the state as previously believed.”

Patricia Moulton, secretary of the Agency of Commerce and Community Development, said that “it seems convenient to blame the state for the small amount of money that has been held.” Moulton said the state has $120,000 in architectural fees left to approve.

“We’re not the reason they’re laying off people,” Moulton said, and she emphasized that “the state is not to blame for the reason the hotel hasn’t been opened.”

In a Feb. 3 agreement with the hotel owners, Davis retained the certificate of occupancy fire and safety permit. He is holding the certificate in escrow until Stenger and Quiros pay him in full or make arrangements for payment, according to documents provided to VTDigger. The Division of Fire Safety inspected the hotel Feb. 4, and the permits from the state were issued to Q Burke Mountain Operating Co.

Davis says he is owed $5.5 million and has not received payment for November construction costs that Moulton says the state has already approved.

Davis has threatened to place a lien on the hotel and pursue litigation if he doesn’t receive payment very soon. Stenger has said PeakCM will be paid this week.

Stenger was recently in Vietnam soliciting EB-5 immigrant investors for the project, and he says they had “great success” in “welcoming the remaining Q Burke investors.” Each new investor brings $500,000 in capital to the project.

The state has refused to approve $1.2 million of invoices for late fees, interest, legal fees and equipment, based on the conditions outlined in a July 15 agreement between the state and the Q Burke owners. The Agency of Commerce and Community Development and the Department of Financial Regulation say the owners cannot use investor funds to pay for costs that are not directly related to construction.

In a Feb. 12 memo to Stenger, Commissioner of Financial Regulation Susan Donegan said delays in the opening at Q Burke “are attributable to your own lack of capital, not the escrow authorization process.”

Donegan went on to explain that the escrow agreement with the state was an “accommodation” that allowed the Q Burke hotel owners to finish the project “while we performed an essential financial review of your project.” The review, she wrote, has been hampered by “the absence of a general ledger and other standard financial controls.”

“In short, your failure to engage in best business practices has further prevented us from considering the removal of the escrow conditions to date,” Donegan wrote.

Thanks for reporting an error with the story, "Q Burke resort lays off 180 workers"