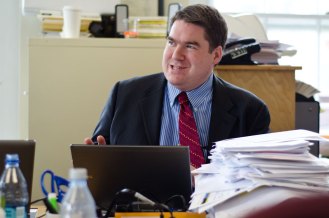 [T]he House voted Wednesday to concur with the Senate version of paid sick leave by a vote of 81 to 64, after a long drawn out debate.

Rep. Oliver Olsen, I-Londonderry, attempted to recommit the bill to the House Commerce and Economic Development Committee on the grounds that there were unanswered questions about costs associated with the bill. That proposal was defeated on a roll call vote 87 to 58.

Earlier in the day the House General, Housing and Military Affairs Committee had, by a strong majority — 6-1-1 — voted the bill out, turning down five amendments which the committee agreed would have watered down the bill. One of the proposals would have exempted employers with three or fewer workers; another would have given new businesses three years to implement the paid leave mandate.

In the end, Olsen, Rep. Alyson Eastman, I-Orford, and Rep. Paul Dame, R-Essex, withdrew their amendments on the House floor.

After the vote, Gov. Peter Shumlin, Sen. John Campbell and House Speaker Shap Smith issued a joint statement praising the bill. The governor is expected to sign the legislation.

“This legislation puts an end to an era where some Vermonters were faced with the decision of going to work sick or potentially losing their job. Many Vermont businesses do the right thing by offering paid sick days to their employees. This important right will now be extended to all Vermonters. That’s the right thing to do for workers, businesses, and public health. We’re proud that Vermont will become the fifth state to guarantee this important protection to its citizens.”

H.187, sometimes known as the Healthy Workplaces Bill, is officially “an act relating to absence from work for health care and safety.” It was passed by the House last April with a 72-63 vote. Since that original vote, support for the bill has increased after the Senate added exemptions to ease the impact on businesses, including a delay of one year before it takes effect for new businesses. Temporary and seasonal employees were exempted in the original House bill.

The Senate bill exempts workers under 18 and part-time workers who work fewer than 18 hours a week on average and for fewer than 20 weeks a year. There were also some tweaks regarding who is covered among state part-time employees and some health-care and school employees as well as per-diem and “intermittent” employees. Businesses with five or fewer employees who work 30 hours a week or less are exempt from the paid sick leave mandate until Jan. 1, 2018.

Wednesday’s House debate was an opportunity for both opponents and supporters to plead their case. Opponents focused on their reservations about the impact of the bill on small business, which they see as struggling in the present economic climate with too many fees and regulations, while supporters declared the legislation is a much-needed, family-friendly benefit that will help businesses attract and retain good workers.

Reps. Olsen and Dame objected to what they said is the potential impact of unintended consequences on businesses. They also said the bill leaves “a host of unanswered questions,” as Olsen put it.

Rep. Helen Head, D-S. Burlington, emphasized the flexibility for employers built into the bill, and she underscored that any employer that offers a plan that equals or exceeds the requirements of the bill is unaffected. Asked at one point if an employer is required to send an employee home who arrives at work sick, she said there was nothing in the bill that stands in the way of an employer having their own personnel policy since the bill allows employers to make their own rules.

Rep. Cynthia Browning, D-Bennington, said H.187 goes “way beyond sick leave” by including “care of an employee’s extended family.” Browning said the mandate is a “small-business burden” which could cost a business $1,000 or $2,000 a year. She balked at the idea that the responsibility would be “on business owners to resolve a family situation.”

The bill offers paid time off for a wide range of family illness or injury, and includes doctor’s visits, caring for sick family members from child to grandparent and arranging for services or care for the employee or a family member who is a victim of domestic violence, sexual assault or stalking.

Lindsay DesLauriers, director of Main Street Alliance of Vermont, which has lobbied for the bill for several years, said in a statement that the bill was balanced between the needs of workers and businesses. “It was a long road to the governor’s desk for this bill, but the work was well worth it,” DesLauriers said.

“The joint fiscal office estimates the cost of this law to Vermont private employers to be $2.8 – $6.3 million in 2018 and between $4.8 – $11 million annually thereafter,” Turner said in a statement. “The Democrats have passed several pieces of legislation this biennium that place an additional burden on Vermont employers. However, they have not supported steps to improve the business climate, which would allow businesses to prosper and Vermont’s economy to grow.” Thanks for reporting an error with the story, "House passes Senate version of paid sick leave bill"