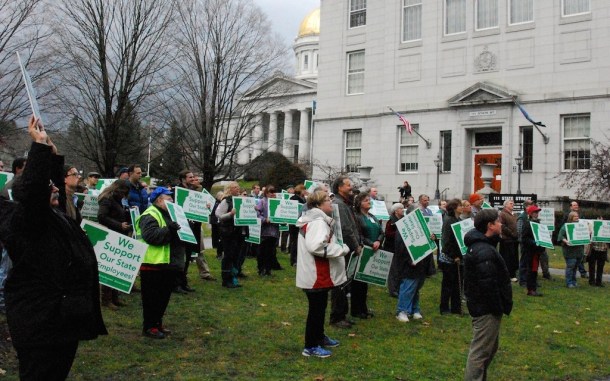 VSEA members rallied on worker safety near the Supreme Court in December. Photo by Elizabeth Hewitt/VTDigger

[V]ermont’s highest court has paved the way for deputy state’s attorneys to unionize.

The Supreme Court handed down a decision Friday that overturned a 2014 ruling by the Vermont Labor Relations Board that barred workers in state’s attorneys’ offices from unionizing.

The decision is a key step in a years-long push over collective bargaining rights for employees of county prosecutors.

In a decision issued Nov. 3, 2014, the Vermont Labor Relations Board denied a petition from the Vermont State Employees Association to organize eight of the Vermont’s 14 state’s attorney offices.

Vermont’s state’s attorneys are elected by county, but are funded through the state’s annual budget. Offices, which range in size, employ deputy state’s attorneys, victims’ advocates and secretaries.

The board argued that state’s attorneys’ employees are neither employees of the state nor municipal employees. Collective bargaining rights would need to be granted through legislative action, the board decided.

The Supreme Court disagreed, however, finding that state’s attorneys qualify as municipal employers, in offices that employ five or more employees, which opens them to the right to decide to organize.

“This makes sense as a matter of public policy,” the court wrote in the decision.

“Plainly, the Legislature has endeavored to act comprehensively in covering government employees, including those working for local government entities such as the [state’s attorneys’ offices],” the decision goes on.

The ruling is a first step that gives employees of state’s attorneys’ offices the opportunity to form a union, Tim Belcher, general counsel for the VSEA, said Monday.

“They now need to decide whether they want to form a union and do the hard work of negotiating a contract,” Belcher said.

On a practical level, the Supreme Court decision gives employees of state’s attorneys the right to decide whether they would like to organize, he said. But on a broader scale, Belcher said, the decision reinforces “an important principle.”

Even when employers are limited in their control over “big picture” items like money, employees have the right to negotiate for smaller factors in a workplace that impact daily life — such as work and vacation schedules or air conditioning levels, Belcher said.

“Smaller things that matter in your day to day life,” Belcher said. “They should have the right to go through this.”

“This is an important victory for VSEA and working Vermonters, as it addresses a number of significant labor law questions and allows VSEA to now organize most of the employees in State’s Attorneys Offices,” Bellini said.

Bellini said the decision is “a start,” and the VSEA board will be meeting to deliberate on how best to move forward.

David Cahill, the executive director of the Department of State’s Attorneys and Sheriffs, who will be sworn in as Windsor County State’s Attorney Tuesday, said the Supreme Court decision recognizes the hard work of employees of Vermont’s prosecutors.

“I’m glad that the decision, regardless of whether you view it in a positive or negative light, will cause members of the public and state government to realize the long hours and dedication that our employees in state’s attorneys offices put into their job,” Cahill said.

Thanks for reporting an error with the story, "Court ruling gives employees of state’s attorneys right to unionize"