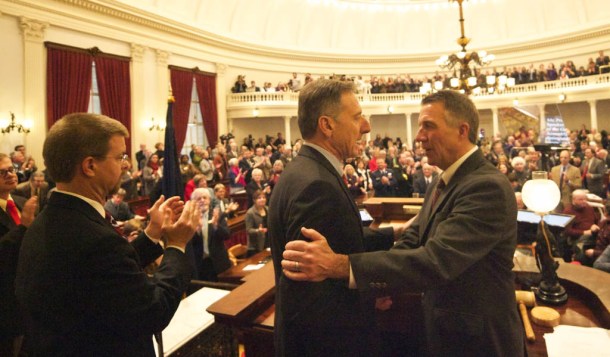 [E]ven Internet surfers convinced that seemingly everything now has its own website — Scrabble? Check. Sweden? Check. Snuggle the fabric softener bear? Check. — may be surprised to learn of the latest entity ready and raring to go viral:

Sure, the chief executive isn’t scheduled to deliver the annual speech until Thursday at 2 p.m. But log onto the new www.2016stateofthestate.com and you’ll find that hasn’t stopped his office from promoting it through a precedent-setting homepage.

“The governor’s agenda this session will focus on building upon the significant progress Vermont has made in the last five years — it would take a long time to list all of that in the speech,” spokesman Scott Coriell says. “The website felt like a more appropriate and user friendly way to get that info out.”

Shumlin, speaking to VTDigger just before Thanksgiving, didn’t hint at anything historic when asked about his last State of the State address and subsequent Jan. 21 budget message.

“There won’t be any big initiatives,” confided the governor, who isn’t seeking re-election this fall. “It will be about completing what we promised to deliver.”

That said, people who click on www.2016stateofthestate.com in the hours before presentation will find — spoiler alert — the revelation: “Vermont is a great state. On January 7, 2016, Governor Peter Shumlin will outline an agenda to make it even greater.”

Vermonters who value surprises enough to unplug from technology the week before the opening of the latest Star Wars film are safe to click on the homepage’s “The Record” button, which notes, “Governor Shumlin has addressed the Legislature five times before. Take a look back at the record.”

But people should proceed with caution if they aim their cursors toward “The Progress” button, which teases, “Since Governor Shumlin came to office, Vermont has made incredible progress. Take a look at how far we’ve come.”

Not all those who peek may necessarily agree. A fall survey by the Castleton Polling Institute found that 40 percent of those surveyed believe the governor is doing a good job, compared with 43 percent who think otherwise. Shumlin’s approval ratings are lowest among those who say they follow news very closely.

Asked about the dip, Shumlin notes that incumbents nationwide are facing a “throw all the bums out” electorate while the media, in his estimation, favors bad news over good.

In a video posted on the homepage Wednesday, Shumlin offered a “sneak preview” of a new “step up” program that will give participants a free semester of college classes and support services to help them balance their education and employment “so they can get back into school and on the road to a better future.’”

The website, his office promises, “will be updated in the coming weeks” following his State of the State and budget speeches, each set for live broadcast on such outlets as Vermont Public Radio, VPR.net, vermontpbs.org and, through CCTV, livestream.com.

As for anything else motivating the new homepage?

“Nothing too specific,” Coriell says, “other than living in the 21st century.”

Kevin O’Connor, a former staffer of the Rutland Herald and Barre-Montpelier Times Argus, is a Brattleboro-based writer. Email: [email protected]

Thanks for reporting an error with the story, "Shumlin’s State of the State targets the World Wide Web"