Editor’s note: This article is by Patrick O’Grady, of the Valley News, in which it was first published Aug. 11, 2015. 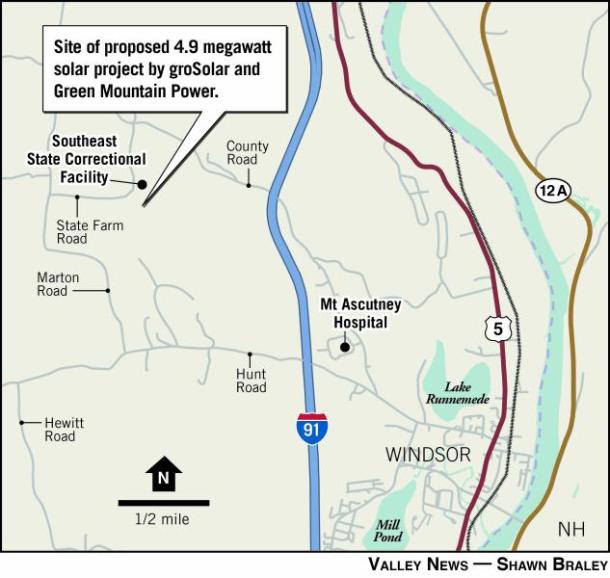 [W]INDSOR — About 60 residents attended Monday night’s public forum on Green Mountain Power’s proposed solar array on the state-owned prison property off County Road, and they were nearly unanimous in their opposition to the project.

“It seems like a huge impact on a beautiful piece of property to power 1,200 homes,” said Sue Marchand-LeBrun, who skis on the land.

Some also claimed that the forum was of no value because they believe the decision has already been made because Green Mountain Power has been in discussions with state agencies on the project since last winter.

“The fix is in. I see our comments as meaningless,” said opponent John MacGovern, who thought the town’s only chance to stop the project is a strong stand by the Selectboard.

After MacGovern spoke, toward the end of the nearly two and a half hour meeting, Kristin Carlson of Green Mountain Power assured residents a final decision is a long way off.

“This is not a done deal,” Carlson said.

The comments at the forum and additional public input will “shape” Green Mountain Power’s decision on whether to pursue the proposal, she said.

Tom Kennedy of the Southern Windsor Regional Planning Commission said, “This is not over by any stretch of the imagination,” and urged residents to submit comments to the Public Service Board, which will hear the application and decide whether to approve the project.

GMP and groSolar of White River Junction have proposed the installation of 19,000 solar panels on 35 acres of leased land south of the prison buildings on the 900-acre property. The 4.25 megawatt array would generate nearly 7.4 million kilowatt hours annually to power 1,200 homes and help GMP toward its state mandated goal of having 55 percent of its power coming from renewable sources by 2017. The array would stand eight feet high and would be surrounded by a fence to keep people out but allow small animals to move through the property. A skiing and hiking trail would cut through the middle of the array. The town would receive an estimated $45,000 yearly in property taxes on the array and after 25 years, there are two, five-year options to extend its use. After 35 years, the array would be decommissioned and the property returned to its current state. According to Kirk Shield, GMP’s director of development, the property is not considered prime agricultural soils, correcting a claim by project opponents.

“This is a huge opportunity for us,” said Dan Edson, with the Department of Building and General Services, which manages the property.

Despite statements that Green Mountain Power had considered other state-owned sites but found this location to be the most viable and that extra care would be taken to minimize impact on the land, preserve recreation and protect bird and wildlife habitat, opinions mostly went against the project.

At one point in the discussion, after several comments opposing the location, Fish and Wildlife Commissioner Louis Porter said the site would have the least amount of impact on the habitat of anywhere on the property. He then asked the audience for suggestions on an alternate location for the solar array.

Opponents thought Windsor would lose a beautiful location with abundant wildlife and was not getting enough in exchange, urging officials several times to find another place.

“I don’t see how Green Mountain Power can come in and take our land,” said Windsor resident John Mayo. “You need to be more judicious in the selection of your site.”

Rollin and Carol Rice, who live on County Farm Road, didn’t agree that solar would provide energy at a lower cost or that the panels would not affect them.

“I’m very angry we have been notified this late in the game,” said Rollin Rice, who suggested the property be used once again as a farm. “Our property is going to be impacted and I don’t believe it will help us financially.”

His daughter-in-law, Pam Rice, who lives on Chellis Road, said the array would ruin her views for the next 35 years.

MacGovern called it “a terrible eyesore” and said one of the most beautiful views of Vermont farmland would be “destroyed.”

Marie Caduto, vice president of the Ascutney Mountain Audubon Society, said, “We think the project is out of scale for the property and the wildlife.”

She called for more studies on the nesting of grassland birds before the project is approved.

Rod Viens of groSolar said they would do more studies if the Agency of Natural Resources requested them.

By next week, the application to the Public Service Board will be submitted and within 30 days, the board is expected to create a scheduling order that could mean a site visit to the property in late October or early November.

Town Manager Tom Marsh urged residents to submit their comments to him and he will forward them to the Selectboard. The board is expected to take a position on the project possibly in September.

“I hope the Selectboard will stand up for Windsor and for the rights of the people of Windsor,” MacGovern said.

Patrick O’Grady can be reached at [email protected]

Thanks for reporting an error with the story, "Windsor residents oppose solar project proposed for prison"