Vermont has been awarded a $3 million federal grant that will enable expansion of treatment options for opioid addictions in four counties across the state, according to a press release from Sen. Patrick Leahy’s office Friday. 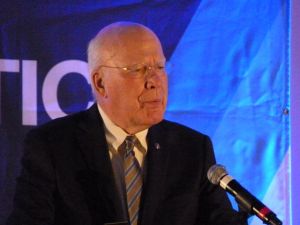 Vermont is one of 11 states that will receive the grant, provided by a new Substance Abuse and Mental Health Services Administration funding program which Leahy created after hearing testimony at last year’s Senate Judiciary Field Hearing in Rutland. Speakers at the hearing pointed out a need for more heroin and opioid treatment options within the state, the release said.

“We know the demand for treatment of opioid abuse has increased dramatically in recent years,” Leahy said in a statement, “and Vermont is certainly not alone in this challenge. Continuing to provide the resources and support for treatment and recovery is among my highest priorities.”

Vermont has had MAT services for years, but demand for the program has been rapidly overtaking supply. Some 2,500 Vermonters received MAT services through the state’s “hub and spoke” delivery system by December 2014, compared to only 549 in December 2010, the release said.

Kathryn Power, SAMHSA’s Region 1 administrator, said that expansions to the state’s MAT services would help protect Vermonters from the negative effects of heroin and opiate addiction.

“Heroin use and overdoses, along with prescription opioid abuse, pose a grave public health risk. Expanding medication-assisted treatment programs can have an enormous positive public health impact. Programs like this show the commitment of U.S. Department of Health and Human Services to reducing heroin-related overdose, death, and dependence in communities across the country,” said Power in the release.

“We’ve come a long way in building our capacity to offer medication-assisted therapy and recovery support for Vermonters who are struggling with addiction. This grant comes at a time when we really need more resources to expand and enhance our medical and psychosocial supports to the people and areas of greatest need,” said Vermont Health Commissioner Harry Chen, MD, in the release.

Thanks for reporting an error with the story, "$3 million federal grant will expand treatment for opioid addicts"

Should Vermonters throw turkey scraps in the backyard compost?

As cases surge around Barre, locals and businesses weather the storm