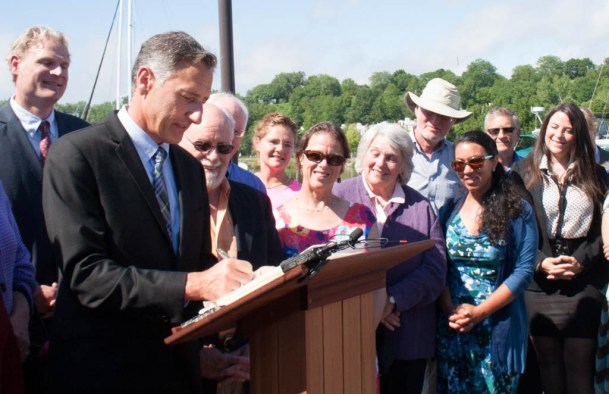 BURLINGTON — Gov. Peter Shumlin signed a bill that aims to improve the quality of the state’s waterways Tuesday on the shore of Lake Champlain.

The bill, H.35, raises money through a 0.2 percent surcharge on the state’s property transfer tax. The first $100,000 of the sale price is exempt from the surcharge if the the property is the seller’s primary residence. The first $200,000 is exempt from the surcharge if the purchaser obtains certain government-funded mortgages. The 0.2 percent surcharge is on top of the current transfer tax rate of 1.25 percent, according to the Vermont Department of Taxes. The surcharge will end in 2018 and is expected to raise $5.3 million in fiscal year 2016.

The law allocates $2.6 million of new money in 2016 to support eight new positions at the Agency of Agriculture and 13 at the Department of Environmental Conservation. The agencies will also use the money to enforce water quality regulations and educate the public about phosphorus pollution that is causing the formation of toxic blue green algae blooms.

Shumlin said the bill will provide roughly $8.2 million from state funds and $5 million has been pledged from Green Mountain Power for water quality improvements. More federal money is coming with the help of Sen. Patrick Leahy, D-Vt., the governor said.

The bill creates a Clean Water Fund that tracks money to be used to improve water quality. It also places fees on pollution permits, medium- and large-farm registrations and sales of non-agricultural fertilizer and pesticides.

A 2013 report prepared by the Department of Environmental Conservation found that it would cost more than $155 million annually for 10 years to clean up the lake. James Ehlers, executive director of Lake Champlain International, said that’s why H.35 won’t work.

“Collectively, it’s not going to show us anything demonstrative in cleaning the state’s waters,” Ehlers said.

David Mears, commissioner of the Department of Environmental Conservation, said his department has learned a lot in the years since that report and that it didn’t focus only on pollution, but on all infrastructure including wastewater treatment plants, dirt roads and paved surfaces.

Mears said the money will be used to clean up the state’s waters over the next 20 years.

The department will be required to report annually on how much money is actually needed to clean up the waters, Mears said. The first report is due in January 2017.

Correction: The amount of the sale price exempted from the transfer tax surcharge was incorrect in an earlier version of this story.

Thanks for reporting an error with the story, "Shumlin signs water quality bill by the waterfront"

Stuart Stevens: A message to Democrats

By Kit Norton and Erin Petenko