Editor's note: This article is by Chris Mays, of the Brattleboro Reformer, and was first published March 10, 2015. 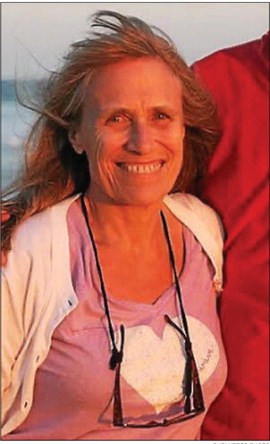 Susan Keese wrote for Vermont publications and was employed at VPR before her death early Saturday morning. Courtesy photo

“She was extremely inquisitive. She found everybody interesting and she loved telling people’s stories. She had very many friends,” said John “Bud” Pyatak, Keese’s husband for 38 years. “I think you would find it hard, if not impossible, to find a single person that would have a negative thing to say about Susan. She was a friend to all.”

Keese died due to a complicated illness triggered by the flu. Pyatak said she was at Bay State Medical Center in Springfield, Massachusetts, when her heart eventually gave out.

Pyatak received a call on Monday from Gov. Peter Shumlin, who said he felt there was a real loss in the state because Keese was such a straight shooter as a journalist.

“There’s a hole in our lives. We’re just going to have to learn to live with that and to move forward in our lives,” said Pyatak. “We’ll always hold her very close to our hearts.”

Keese was most recently employed as a reporter and producer for VPR and her segments would sometimes air on National Public Radio. She covered southern Vermont for the organization from 2002 until her death. Her freelance work appeared in The New York Times, Boston Globe Sunday Magazine, Vermont Life, Vermont Sunday Magazine, Orion, Yankee Magazine and American Profile. Some of her stories appeared in the Reformer.

As general assignment reporter from 1981 to 1987, Keese covered news, government, public policy, arts, environment and personalities for the Rutland Herald.

“She was a wonderful person and a superb reporter,” said Norman Runnion, a former Herald editor.

Keese served as a creative writing workshop leader from 1995 to 2007, participating as an instructor, panelist and coach at various school and college programs. She was certified through Amherst Writers and Artists. From 1986 to 1993, she was editor-in-chief of Potash Hill, the Marlboro College Alumni Magazine.

VPR News Director John Dillon met Keese while she was still writing a column at the Herald. They talked on and off, he said, but he really came to know her when she came to VPR. In the last year and half, Dillon was her editor.

“She always went for the people in the story. So she wanted to find the people affected and get their voices in the story,” said Dillon, who recalled Keese trying to find Vermont Yankee employees to talk to about the nuclear plant’s impending shut down. A piece by Keese about families disrupted by the shutdown went out on the airwaves in August. “She was always looking for the human element in the story. She was incredibly hardworking. She’d put equal time and effort into 300 word byte scripts as she did on a long feature. She was just really dedicated.”

Keese was always upbeat, Dillon told the Reformer. As long as the revisions made sense, he said Keese would eagerly accept them and she wouldn’t push back.

At a VPR news meeting Monday morning, colleagues brought up Keese’s staying at a shelter in Brattleboro during Tropical Storm Irene and how she covered the aftermath. Dillon said she followed a couple families and reported what happened to them. “She really had this nice way. She wasn’t a cynical reporter. She found the interesting turn or uplifting piece of an event,” said Dillon. “She was a really gifted writer, too. She made the transition from print to radio really well.”

Keese recently covered the closure of the Austine School for the Deaf, which brought up issues of separate but equal education opportunities. Hard of hearing and deaf students felt they could receive a better education if they were taught in American Sign Language. Dillon said the story was not easy to report and Keese had to find interpreters to get the students’ message out there.

In Dillon’s opinion, Keese was not a born hard news reporter. But he said she could certainly write hard news stories.

“And she could write beautiful news features,” Dillon continued. “She was a thoughtful colleague. She would send notes to people if they had a good story and always went out of her way to tell people they did a good job.”

Dillon was shocked at the news. He said he knew she was sick but hoped she had turned the corner.

“I think I can speak for everyone in the newsroom,” said Dillon. “We are really sad today and we miss her.”

Thanks for reporting an error with the story, "VPR correspondent Susan Keese dies at 67"