In general, would you support or oppose plans to consolidate local school boards into larger regional boards in Vermont?

Would you support or oppose the elimination of subsidies for small schools?

One idea to battle the rise in property taxes is to shift some of the costs of supporting schools to the income tax. Would you support or oppose an increased income tax to help fund education?

[V]ermonters support the idea of reducing the number of local school boards by consolidating them into larger, regional systems, a new poll indicates.

A VTDigger/Castleton Polling Institute survey found that 48 percent of respondents approve of school board consolidation while 42 percent are opposed.

Those surveyed strongly oppose the elimination of small school grants and oppose using the state income tax to help pay for public schools.

Methodology
These data were collected by the Castleton Polling Institute’s phone center, using live interviewers. All interviews were completed Feb. 9-24, 2015.

Phone numbers were drawn from a dual frame sample of cellphone and landline numbers. The cellphone sample was drawn from numbers allotted to cellphone rate centers within the state of Vermont, and the landline numbers were drawn using random digit dialing techniques based on known exchanges and live 1000-blocs within the 802 area code. The final sample includes a total of 700 completed interviews, 477 by landline (68 percent) and 223 by cellphone (32 percent). Thirteen percent of the total sample have no landline at their residence and therefore would be excluded from any chance of inclusion without the cellphone sample frame.

Every county in the state is represented within 3 percentage points of its proportion of the state’s population prior to weighting the data. The final data are weighted by county, gender, and age to adjust for differential response rates in order to assure that the data are as representative of the state’s actual adult population as closely as possible.

The margin of error for a sample of 700 is +/- 4 percentage points at the full sample level. Any subpopulation analysis entails a greater margin of error. While sampling error is only one possible source of survey error, all reasonable precautions have been taken to reduce total survey error.

The poll of 700 Vermonters was conducted Feb. 9-24 (see sidebar for methodology).

The results come as the Vermont Legislature grapples with the continuing decline in enrollment in public schools, which has fallen by more than 21,000 pupils since 1997 and is predicted to continue decreasing through at least 2030. Lawmakers have focused ways to reduce rising school property taxes while maintaining equal educational opportunities for students.

Backlash from taxpayers last year was evidenced when nearly three dozen school budgets were defeated. Just as voters head to the polls on Town Meeting Day to decide on next year’s school budgets, the House Education Committee completed work on its finance reform bill H.361.

The survey shows that 60 percent oppose the elimination of subsidies to the state’s smallest schools and 28 percent support the idea.

Sen. Ann Cummings, D-Washington, chair of the Senate Education Committee, said the responses to the income tax question and the move to consolidate schools into regional systems are similar to what legislators have heard.

“At least two of them are so close, I’m not sure they are even statistically viable,” said Cummings of the poll’s findings.

That closeness -- on both those questions -- 44 percent of the respondents being in favor to shifting “some of the costs of supporting schools to the income tax” to help fund education and 50 percent opposed, with 7 percent unsure -- is close to what Cummings said the Legislature has heard.

Cummings said the results on small schools grants were a surprise.

She said the divide in the results echoes the complexity of the education reform problem. 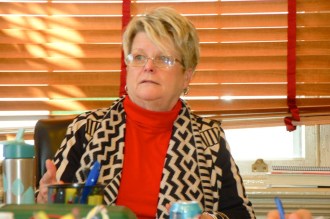 Stephen Dale, executive director of the Vermont School Boards Association, said the responses on school board consolidation mirror those of his organization.

The divide among respondents to the poll “reflects what our experience is with our own membership,” he said.

“Our membership is split,” Dale said. “Two-thirds of our districts don’t get them (the grants), and wonder why we are subsidizing small schools. And a third feel (the schools that do get them) feel like it was part of the original deal of Act 60.”

Rep. Alice Miller, D-Shaftsbury, a member of the House Education Committee, said she was not surprised to see the high level of support for continuing small schools support.

Miller pointed out that women supported the preservation of small school assistance much more strongly than men did -- 64 percent of women oppose cuts to small schools.

"Schools are the hubs of the community, that’s where lots of things happen,” Miller said.

Rep. Kevin “Coach” Christie, D-Hartford, ranking member of the House Education Committee, said the split on larger school districts is in part due to fear of school closings. The legislation does not recommend the elimination of schools.

“That whole term, ‘consolidation,’ kind of has a rancor to it; I like when the secretary (of the Agency of Education, Rebecca Holcombe) spoke with us and called it collaboration,” Christie said. “We chose this word (consolidation) and everyone freaks out.”

Thanks for reporting an error with the story, "VTDigger/Castleton poll shows some support for school consolidation"