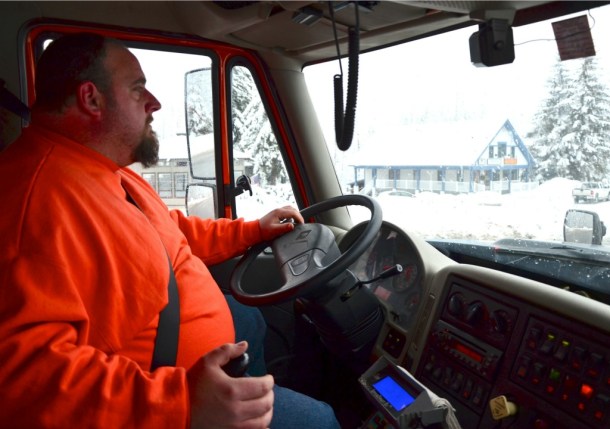 Mike Bride shifts the gears on his snowplow on Route 4 near Killington in sloppy winter weather on Martin Luther King day. The drivers in the big state rigs have a lot to keep track of, from hydraulic controls that operate the plows and sand dispersal to drivers spinning out and roads so slick that even they go off the road, despite having chains on. Photo by Andrew Nemethy

Editor’s note: In This State is a syndicated weekly column about Vermont’s innovators, people, ideas and places.

It’s early morning on Martin Luther King Day, but it’s anything but a holiday for state worker Mike Bride.

Sitting in the driver’s seat of a rumbling orange behemoth – its distinctive color familiar to every Vermont driver – Bride is guiding 33 tons of rubber, steel and sand up the long incline of Route 4 to the top of snowy Sherburne Pass. On the right side of the truck, the blade of his wing plow grinds along the pavement, peeling a dirty white slurry of slush and frozen crud off the pavement and over the side of the road in an impressive rooster tail.

He is multitasking at an elite level, assaulted by noise and flashing lights, guiding an 11-foot, one-ton blade that he can’t see inches from the guardrail as slush flies up to blur the windshield. At the same time, Bride warily eyes a steady stream of cars, SUVs – which look very puny from his perch – and tractor trailers passing by in both directions on this critical highway, a gateway to Pico and Killington ski areas and the city of Rutland.

“A lot of people are too busy to drive,” he observes: eating, texting, calling or reading maps when they should be watching the road. “We see it all the time.” 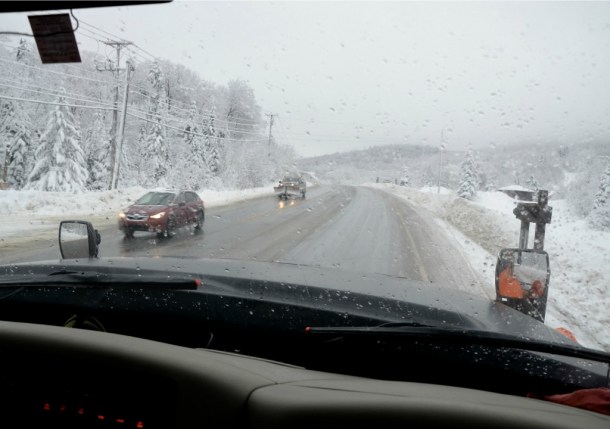 The view from the high perch of one of the state’s 275 snowplows reveals a sloppy Route 4 on the morning of Martin Luther King Day. Just 12 hours earlier, driver Mike Bride says the road was a skating rink and one of the plow trucks out of the Mendon VTrans garage went off the road, joining many cars and a bus. The winter terrain around 2,190-foot Sherburne Pass is often treacherous and a challenge for the state crews who maintain it. Photo by Andrew Nemethy

Welcome to a cab’s eye view of winter at its worst, which is when Vermont Agency of Transportation snowplow drivers buckle up and buckle down for 12-hour days, hair-raising rides, sleep deprivation and all that Mother Nature can throw at you. The list includes snow, ice, rain, freezing rain, hail and sleet and then for extra fun, iced-over roads that even chains can’t handle and hypnotizing squalls that can make driving like a movie simulation of entering a black hole at warp speed.

“There’s times out there when it can get really nasty,” Bride says. “We actually had a truck last year, it was snowing so hard the driver did not know where he was and he actually ran off the road,” adds Bride.

Raised in Proctor with deep roots in the town, Bride is the supervisor for the state garage in Mendon, which is located near the Pico ski resort. On this January weekend, a cocktail of winter weather has delivered a Sunday wallop. With forecasters warning drivers to stay off the road, state snowplow crews (and their town and city brethren) were gearing up and heading out. The four men in Bride’s crew cover parts of Route 4 and Route 100, around 26 miles in all, which includes the 2,190-foot crest at Sherburne Pass, a mountain sandwich that always gives drivers plenty to chew on.

“Pretty much if they breathe the word snow around here, we get it,” says Bride. And get it they have. This Monday began for him at 3:30 a.m., but his crew started with an eventful Sunday afternoon that featured rain changing to freezing rain and then a good-sized dump of heavy wet snow. By 6 p.m. Sunday night, “It was just mayhem,” he says. “We had a bus off the road, there were cars off everywhere, one of my trucks was off,” Bride says, adding that even with chains “sometimes it can be a big ice skate.”

As his plow approaches the Killington Access Road, he raises the wing plow and we skirt the access road entrance and then he lowers the wing again as he heads downhill on Route 4 toward Plymouth. It’s all highway his crew of four knows inside out. “You get assigned a road, it’s yours,” he explains.

A big man, a former logger, with a trim beard and the heft of an offensive lineman, he’s got a relaxed demeanor as he navigates the highway, clad in an orange VTrans sweatshirt. Mendon state garage supervisor Mike Bride talks in his office about the unpredictable, weather-driven life of a state snowplow driver. He’s seen VTrans drivers put in as much as 150 hours over two snowy weeks and they all have tales to tell about their storm adventures. Photo by Andrew Nementy

Besides steering, there’s a floor shifter to cycle through the truck’s 10 gears, a swing-out pod to his right that contains the hydraulic controls that lower and raise the plows, and an electronic console that dispenses the massive load of sand in the back or a separate load of brine.

Bride is part of a small dedicated army of skilled drivers who are on call 24/7 to run 275 state snowplows, enabling our mobile lifestyles, from skiers eager to hit the slopes to commuters pushing to get to work. The job is occasionally exhausting, often unpredictable, taxing on family life and literally rough.

“You go to the dentist afterwards to get your fillings put back in,” he jokes about the experience of driving a big plow. He also quips that it’s “living the dream,” but one senses there is pride behind the sarcasm.

Sitting in his office at the District 3 VTrans garage before hitting the road, Bride says it’s a life that’s hostage to winter weather. “That’s the biggest thing with this job, the predictability. There is no predictability,” he says. “I’ve seen in a two-week period, maybe 150 hours … 70 to 80 hours a week is not unusual,” he says, joking that no one plans on taking any “Florida vacations.” That time includes hours in bucket loaders, big graders and heavy-duty pickups rigged with plows, all tools in VTrans’ arsenal. 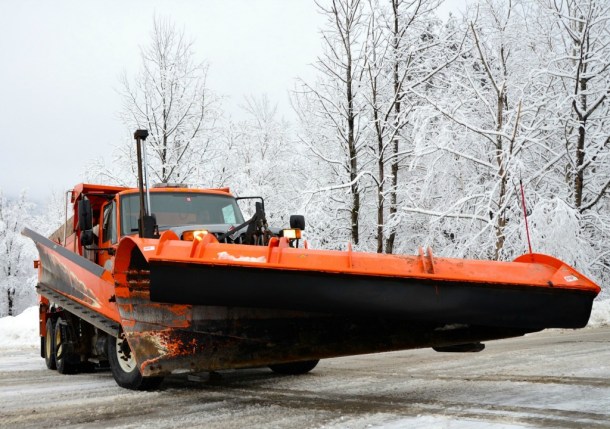 The massive front plow on Mike Bride’s VTrans 10-wheel dump truck weighs more than a ton and stretches for 11 feet. The state has 275 trucks mounted with front and wing plows during winter and deploys a small army of skilled drivers who work 24/7 when foul weather rolls in. Photo by Andrew Nemethy

It is a huge enterprise: Vermont spent more than $30 million to keep roads clear last winter, tallying 367,078 hours of plowing, according to the Agency of Transportation. There are 3,313 miles of state highways and interstate to keep clear, according to state maintenance engineer Todd Law, so trucks like the 10-wheeler driven by Bride are an ubiquitous presence when winter weather descends – not to mention a sometimes fearsome encounter for white-knuckled drivers stuck behind their blizzard of backwash when plowing.

Bride says snowplow drivers are well aware that being behind them is no one’s favorite spot. “Everyone always wants to be in front of you,” he says. “I probably keep as good an eye on what’s behind me as I do what’s in front,” keeping tabs on vehicles that are looking to pass – often taking chances they shouldn’t when a little patience would serve well.

From his driver’s seat after eight and a half years, he has just about seen it all. He’s been rear-ended while standing still. He’s had to swerve over as a car trying to pass squared off with a tractor trailer. He’s had someone clip his plow and do a “barrel role” and seen plenty of cars “do a birdy,” a term he coined for when someone passes him and then promptly loses control and spins out.

He shakes his head recalling how a driver once even passed him on the right with his window cracked open so the wing plow delivered an unexpected snow bath.

His most bizarre tale? The day one of his drivers hit the brakes when he saw a man lying down in the snowy road in front of the Inn at Long Trail and McGrath’s Pub at the top of the pass.

What was he doing there? Bride shrugs. “Snow angels?” he suggests. “We’ve had some pretty odd happenings.” Thanks for reporting an error with the story, "In This State: For state snowplow drivers, life in the cab is a rough..."