Groups that support the legalization of marijuana joined forces Tuesday, saying that decades of prohibiting recreational use of the drug has failed.

“Marijuana regulation is about far more than being pro-marijuana,” Matt Simon, New England political director of the Marijuana Policy Project, said at a Statehouse news conference. “No matter how you slice it, marijuana prohibition has not been an effective policy for the state of Vermont.” 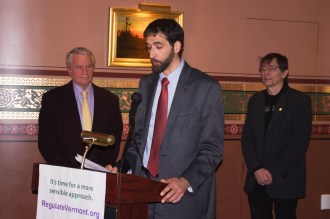 Matt Simon, New England political director of the Marijuana Policy Project, announced Tuesday, Jan. 6, 2015, the formation of the Vermont Coalition to Regulate Marijuana, a collaboration of groups that support the legalization of marijuana in Vermont. Photo by Tom Brown/VTDigger

The Legislature decriminalized possession of small amounts of marijuana in 2013. A bill to legalize and regulate recreational use of pot was introduced in 2014, but died. A bill calling for a study of the costs and benefits of legalization was approved. That study, being completed by the RAND Corp., is due to be released next week.

Sen. David Zuckerman, P/D-Chittenden, said Tuesday that he plans to introduce a legalization bill within the first few weeks of the session, which begins Wednesday.

“This bill will be much more detailed, based on the Colorado experience,” Zuckerman said. He said it will likely contain language on the different ways of consuming marijuana, such as edible products.

Gov. Peter Shumlin has said he supports legalization in concept, but wants to see more data from the laws passed in Colorado and Washington state.

Opponents of legalizing pot will also be represented in the Statehouse this session. SAM-VT, the Vermont chapter of Smart Approaches to Marijuana, is planning an educational outreach to legislators on what it sees as the dangers of legalization, particularly toward young people.

“We want lawmakers to take a thoughtful and science-based approach to this decision,” said Debby Haskins, executive director of SAM-VT. “We need to let them know that not everyone in Vermont is in favor of legalization.”

Allen Gilbert, executive director of the ACLU of Vermont, said the use of marijuana is a matter of personal freedom and should be divorced from criminal enforcement.

“Criminal law should not be used to protect individuals from the consequences of their own, autonomous choices,” he said.

Dr. Joseph McSherry, a neurophysiologist from Burlington, said that regulating marijuana would make it harder for underage people to obtain it and that the drug is safer than alcohol.

Despite the state’s sagging revenue forecasts and a $100 million budget deficit, speakers at the news conference spent little time talking about the potential tax revenue from marijuana sales. Colorado banked about $60 million in taxes, licenses and fees from the sale of medical and recreational pot in 2014.

“The goal here is to make the case that regulation is a much more sensible approach to marijuana policy than prohibition,” Simon said. “Prohibition has failed and it’s time for a new approach.”

Thanks for reporting an error with the story, "Marijuana legalization supporters join forces"