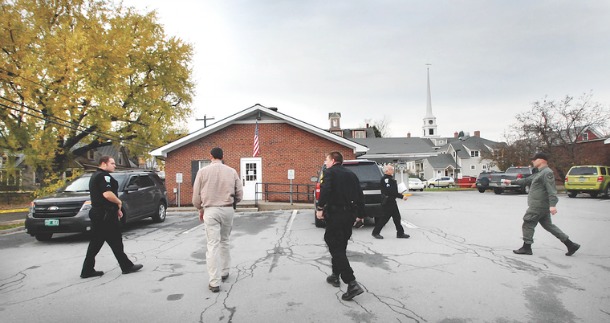 Local and state law enforcement converge on the Union Bank on Park Street in Stowe village following a robbery on Dec. 16. Photo by Glenn Callahan/Stowe Reporter

Editor's note: This article is by Tommy Gardner, of the Stowe Reporter, in which it was first published Dec. 18, 2014.

[D]avid Silverman has become a reluctant expert at bank robberies. He’s president of Union Bank, and five bank offices have been knocked off.

“People ask me, ‘What keeps you up at night?’” Silverman said last week. “My worst nightmare is one of my staff getting hurt in one of these things.”

No one has been hurt in the robberies, but local police and prosecutors think that — despite being the most surefire way to get caught trying to score some quick cash — bank robberies are becoming more frequent in both rural Vermont and cities such as Burlington and Rutland.

This comes even as the FBI tracked a steady decline in bank crimes nationwide from 2002 to 2011, the most recent data available.

“It used to be one every six months or so,” said Lamoille County Sheriff Roger Marcoux. “Now it’s like one a week, it seems.”

Silverman has a unique perspective: Four of his bank’s branches have been robbed a total of five times in the past eight years — Jeffersonville in 2006, Hyde Park in 2009, Hardwick in 2012, and in the past two months Stowe and Jeffersonville again.

Police continue to investigate a number of unsolved Stowe home burglaries, and authorities are still looking for the person who robbed the Union Bank office in Jeffersonville Nov. 20.

According to Stowe police detective Fred Whitcomb, several police departments are working together to see if there is a link between five home burglaries in Stowe in the past month and similar crimes committed recently in nearby towns.

The Stowe burglaries were on Pinnacle, Stowe Hollow, Leriche, Sylvan Park and Baird roads. In most cases, jewelry and/or electronics were stolen, and sometimes the thief used a pillowcase from the home to remove the loot. Stowe police think the perpetrator had help, and are encouraging residents to report suspicious activity.

As for the Union Bank robbery, the bank has offered a $5,000 cash reward for any information that leads to the arrest and conviction of the suspect or suspects responsible for the robbery. Anyone with information about the robbery is asked to contact Vermont State Police at 635-7036.

The two Jeffersonville robberies remain unsolved, and police are still looking for the person who held up the Jeffersonville branch last month, wearing what is becoming standard bank robber garb: A hooded sweatshirt and dark sunglasses.

Silverman also has a lot of connections as executive council chairman of the Vermont Bankers Association, which represents banks and credit unions all over the state.

“Vermont’s a small state, and most of the bankers know each other. If one of us gets robbed, we all get robbed,” Silverman said. “I do think there’s something to the fact that, in more remote areas, there’s a perception they can get away with it.”

Silverman said he and other bank presidents are sharing notes and stories about robberies. Just a sampling from this year:

• A TD Bank in St. Albans was hit Dec. 4, just a couple of hours before the Welden Movie Theater in the same city was robbed. The bank robber wore a hooded sweatshirt and a mask and made off with an undisclosed amount of cash.

• Another TD Bank in Winooski was robbed Nov. 26, also by a person in a hooded sweatshirt. Police didn’t say how much money was taken in this incident either.

• Nov. 20, a masked man robbed the Union Bank in Jeffersonville, and made off with money.

• Union Bank in Stowe was robbed Oct. 28. Police have charged Koren Brand of Barre with the crime; she was also wanted for robberies and attempted robberies at a grocery store in Montpelier and a convenience store in Barre.

• April 14, a person standing roughly 5-foot-6 tall — which appears to be the average height of most of these alleged robbers — knocked off the TD Bank in Swanton.

Robberies are pretty scary stuff for a bank teller, the kind of broad-daylight crimes that keep Silverman awake at night.

It’s not the money, he says. He won’t disclose how much cash has been taken in the Union Bank robberies, but he said it’s less than people might think, in the four-digit range.

“We don’t keep enough money at any one of our branches to bother the financial status of the customers, not even a little bit,” he said.

He worries about the possibility that a robber will actually use the weapon he or she claims to have. So far, no weapons have been fired in recent bank robberies — unlike the early years of Union Bank, when banks held a lot of money and were major targets for violent criminals.

That said, Union Bank does offer counseling and other services for tellers and other employers who feel traumatized after a robbery.

“In the last couple of instances, they followed their procedures perfectly,” Silverman said of his employees.

“People, after they hear about these things, bring our staff cake and cookies and goodies,” Silverman said. “I know it makes the staff feel really good, because it makes them feel like the community has their back.”

Page retires at the end of this month after three decades as a prosecutor. In the last few years, he has been dealing with an increase in opiate and heroin use, and crimes related to getting those drugs.

“I’ve seen an increase in the number of pharmacy robberies, and I don’t think they’re unconnected” to the bank robberies, Page said.

But robberies are by law violent felonies, so the opiate and heroin-addled people who are caught for those crimes won’t simply get the drug-treatment and social services they need. They’ll be sentenced for their crimes first.

“I think drugs are the things to build a criminal career on,” Marcoux said.

Silverman also speculates that the bank robberies of late are “really fueled by illegal drug use.”

“These are acts of desperation,” he said.

The adage says crime doesn’t pay, and the arrest and sentencing rates seem to support that. Local robbers and burglars are caught more frequently than not — the Jeffersonville bank robbery in 2006 an outlier.

Isn’t robbing a bank in broad daylight a risky move?

“I daresay that not a lot of thought goes into these,” Marcoux said.

Union Bank opened in 1891, and back then the banks were where the money was. Silverman said security was a lot more basic back then: armed guards and steel bars at the teller windows. Today, banks have camera systems, the staff gets training, and minor details — notice the yardsticks located near the doors that allow for a quick height check of anyone coming or going. All that makes it a lot more difficult to rob a bank.

“I think you’re more likely to get caught in a bank robbery, with all that tech, and then the police circle the wagons and the feds come in,” Page said.

A plugged-in populace also helps thwart thieves, with Facebook posts practically sounding a shrill alarm anytime a bank is robbed. And more people have security cameras, too. The cameras at the Depot Street Malt Shop in Stowe, installed just days before the Union Bank robbery two doors down, caught the getaway truck speeding off.

Marcoux is still on the fence personally when it comes to police use of Facebook, but said the sheriff’s department does use the platform to present press releases and crime scene photos, and people do interact with the police.

He called social media a “double-edged sword,” because often in the deluge of posts is plenty of wrong information, along with helpful tips.

Thanks for reporting an error with the story, "Opiate scourge linked to rise in Vermont bank robberies"