Staffers in the Department for Children and Families lack knowledge and understanding about how to work effectively with families affected by substance abuse, according to a new report released Thursday by DCF.

The Casey Family Programs study is the third to come out this fall, as part of a wide response to two child deaths in February and April. All three came to similar conclusions.

DCF Commissioner Ken Schatz and his boss, Agency of Human Services interim secretary Harry Chen, presented the 18-page report and seven-page summary along with Schatz’s deputy, Cindy Walcott at a morning news conference in Williston, attended by only three reporters.

Officials are still waiting for the recommendations of a legislative committee that probed the child protection system following the deaths of Dezirae Sheldon and Peighton Geraw, but said it was reaffirming that the three reports offer similar recommendations.

“We have a good road map now to go forward,” Schatz said.

Chen announced that DCF will hire 10 more staffers. They include five management positions in the economic services division, two assistant attorneys general to help district offices with child protection cases and the family services division: an assistant district director in St. Albans, a assistant for the centralized call intake unit and a policy specialist.

The positions will be funded through anticipated savings from the state’s Reach Up program, which helps poor families.

Schatz said that although this will be a year of budget cuts, he hopes the legislative committee on child protection will realize the importance of making the system stronger.

“I am optimistic and hopeful that they will be able to motivate the full legislature to make some very constructive changes,” Schatz said.

Officials talked a lot about the impact of drug addiction on their job of protecting children.

The system as a whole underestimated the impact that opiates have on family dynamics, said DCF Deputy Commissioner Cindy Walcott. 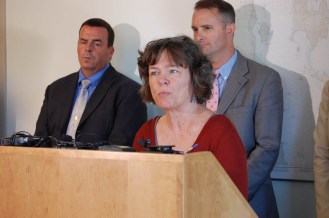 Cindy Walcott, deputy commissioner of the Department for Children and Families, speaking at a July 2014 news conference. Photo by Laura Krantz/VTDigger

“We have to adjust and we have to understand when a parent’s primary driver is addiction,” she said.

To give an example, Walcott said that in the first six months of this year, 70 percent of cases involving children below the age of three involved the use of opiates in the family.

“This is a very pervasive issue that is having a dramatic impact on really the social fabric in this state,” Walcott said.

Vermont already had a higher than average number of children in foster care system, Walcott said.
-
The report’s overall recommendations are:

In addition to a number of other changes, Schatz said the department will make more information available on its website.

“As a department, as an agency, we need to regain public confidence,” Schatz said.

The report said that the number of children entering care has grown faster than the number of leaving care since 2011. Vermont had 7.5 children in out-of-home care per 1,000 children in fiscal year 2013 compared to the national average of 4.9 placements per 1,000.

That percentage increased to 9.1 per 1,000 in fiscal year 2014, the report found. National data for FY14 were not yet available.

Opioid-related admissions to state-funded substance abuse treatment programs more than tripled between 2004 and 2013, the report found. The rate of infants exposed to opioids per 1,000 Vermont resident hospital deliveries more than doubled between 2008 and 2012, it said.

The study began in July and involved focus groups with DCF staff and others, a review of records and Web and telephone interviews. Casey Family Programs provided it free, officials said.

Correction: An earlier version of this story said the study was funded by the Annie E. Casey Foundation.

Thanks for reporting an error with the story, "New report on DCF again calls for more staff, better training"