Editor’s note: This article is by Elizabeth Hewitt, a freelance writer from Warren. 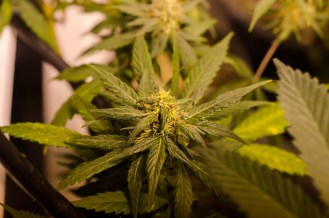 A marijuana plant at a Colorado grow operation. Photo by Brent Levin/Creative Commons

BURLINGTON — With marijuana legalization likely to turn up as an issue at the Statehouse in 2015, a broad spectrum of lawmakers called for a nonpartisan approach to the issue at a panel discussion on Thursday.

The event was organized by the Vermont Coalition to Regulate Marijuana and moderated by the Marijuana Policy Project.

Addressing a crowd of about 50, ranging from skateboard-toting students to sport coat-wearing professionals, Senate Minority Leader Joe Benning, R-Caledonia, Sen. David Zuckerman, P-Chittenden, and Rep. Linda Waite-Simpson, D-Essex, voiced their views on the path to marijuana legalization and regulation in Vermont in the first of two panel discussions hosted by UVM’s Young Americans for Liberty.

“The party labels don’t really matter if you look at the facts on the ground, and if you can simply dissect the material in front of us with respect to whether the policy has worked or not, and whether or not a different policy would work better,” Zuckerman said.

Zuckerman and Benning called for lawmakers to approach the issue of marijuana legalization as a matter of common sense, with Benning citing the Vermont Republican Party’s 2014 platform. 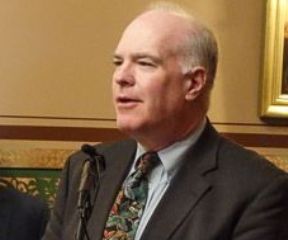 “We have jettisoned the social issues so that we don’t treat things like this as a party issue anymore,” he said. “In my eyes, (prohibition) is, and always has been, stupid.”

Thursday’s panel took place on the same day Vermont’s anti-legalization group, previously known as SMART, announced that it had aligned itself with the national organization Smart Approaches to Marijuana.

Groups on both sides of the issue are gearing up for heated debate in the next legislative session, with the results of a state-commissioned study on pot legalization by the RAND Corp. due to be released in January. It won’t be the first time the issue has been aired; the legislature passed a measure decriminalizing pot in 2013, and last year Zuckerman introduced a bill dealing with legalization and regulation.

Support for reforming Vermont’s marijuana laws seems to be on the rise, with 57 percent of Vermonters in support of legalizing and taxing pot according to a survey by the Castleton Polling Institute in May.

“We take great pride in Vermont being the first in a lot of things,” Benning said. “This is one time when Vermont doesn’t need to be first. We have a couple of states that are presenting us with an example on how to proceed, and it gives us the ability to do it right and better.”

Waite-Simpson, a member of the House Judiciary Committee, spoke about how marijuana-related incarcerations shaped her opinions on the issue.

“We have this whole industry that’s grown up around locking people up for drug infractions,” she said.

When the panelists were asked what would happen to people incarcerated on pot charges in the case of legalization, Waite-Simpson drew applause by saying, “Let them out, and expunge the record.”

The matter of incarceration was a theme in the second discussion as well, with several panelists voicing concerns. Outgoing Rep. Suzy Wizowaty, D-Chittenden, who is the executive director of Vermonters for Criminal Justice Reform, said that education is more effective than criminalization in countering drug use.

“I can’t even begin to tell you what it has done to families, to friends, to close relationships, to towns,” said Paul Volk, the former president of the Vermont Association of Criminal Defense Lawyers.

Marijuana prohibition, he argued, “encourages nonaccountability, it encourages folks to roll over and turn on people in an effort to avoid individual accountability.”

Panelists deferred on questions about specific policies like the number of dispensaries that would serve the state, and regulations on home cultivation, noting that those details would be addressed down the line.

“I don’t care if it’s Robitussin or marijuana or an opiate or a martini, I just don’t want people behind the wheel of a car when they’re using these substances,” Waite-Simpson said.

Thanks for reporting an error with the story, "Panels air marijuana legalization issues"