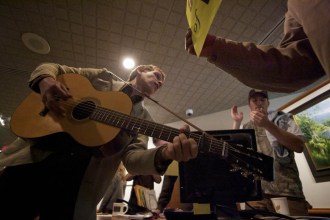 The Shumlin administration has approved new security measures for the Pavilion Building in Montpelier following an anti-pipeline protest that occupied a room on the same floor as the governor’s office, according to a state official.

Secretary of Administration Jeb Spaulding said a series of security changes were put in place the day after the protest last week.

“We did take actions that were the result of the intrusion last week,” he said. “It’s a balancing act. We really want to try to make sure that we preserve the access that Vermonters have gotten used to.”

Spaulding would not describe all the new security measures, which he said are not included under state public records law. However, he said the new measures do not include metal detectors.

He also said the outer lobby of the governor’s office is closed to the public.

“There is not open public access to the (art) gallery on the fifth floor. That is one change,” he said.

Last week, 64 opponents of the Vermont Gas natural gas pipeline were issued trespass citations after refusing the leave the Pavilion. The administration gave the protesters until 6:30 p.m. to leave the building, 90 minutes after the building closes.

Visitors typically enter the front entrance and provide identification security personnel. The visitors are asked to sign in before receiving a badge to ascend the elevator to the desired floor.

Keith Brunner, an organizer for Rising Tide Vermont, was part of the crowd that first entered the fifth floor of the Pavilion during the protest.

Protesters rushed the back entrance to the Pavilion and were blocked by a security guard from entering the first floor. Brunner said he and others entered the elevator on the basement floor, pressed the button to go to the fifth floor, went up and down, pressed it again and were dropped off at the floor that houses the governor’s office.

Brunner said he was not aware of anyone having a badge typically required to start the elevator. Others later went up the stairs, he said. There were approximately 45 protesters on the fifth floor at one point.

Allen Gilbert is executive director for the American Civil Liberties Union of Vermont. He said he did not know how the protesters entered the building, but it appears there was a failure of the systems in place.

He said he would go up to the fifth floor almost every year to view the gallery during the Art Walk arts festival.

“It’s always sort of a sad day when you hear something like this,” Gilbert said of the new security measures. “I think we’re all used to government being open and accessible.”

Thanks for reporting an error with the story, "Governor’s office lobby off limits after protest"

Is there a ‘skater zero’ tied to Central Vermont’s Covid outbreak?