KILLINGTON — Vermont’s food system has grown $1.7 billion of new economic activity in just five years, but one out of seven children in the state are considered “food insecure.”

More than 600 new agricultural businesses have cropped up in Vermont since Farm to Plate’s founding in 2009. But 16 percent of the state’s migrant dairy farm workers don’t have eight hours in a row to sleep any day of the week. 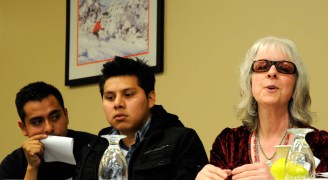 Abel Luna translates for Enrique Balcazar, both of the organization Migrant Justice, with Cheryl O'Neil of the Abenaki Heritage Garden, at a panel discussion on food justice at the fourth annual Farm to Plate gathering Thursday. Photo by Hilary Niles/VTDigger

An estimated 3,400 jobs have been created, but some of those workers rely on food stamps to get by.

Vermont is ahead of the curve in a lot of ways, Richard Berkfield told an audience of at least 200 New Englanders who gathered at the Killington Grand Resort and Conference Center on Thursday. But not when it comes to food access.

Berkfield is a member of Vermont Farm to Plate’s food access "cross-cutting” working group. Farm to Plate, administered by the Vermont Sustainable Jobs Fund, is designed to strengthen the role of local food in Vermont’s economy and communities.

The cross-cutting group is charged with linking all the network’s conversations back to access for people who have trouble obtaining healthy, local food even as its profile continues to rise.

On Thursday, the message of access served as counterpoint to an otherwise buoyant chorus of excitement about the bounty of Vermont farms and farm businesses. The dual message was intentional.

"If we don’t find a way to build a food system that is equitable, just and accessible to all, including good wages and working conditions,” VSJF executive director Ellen Kahler said, "we’ll be just repeating many of the realities of our current, industrial scale food system.”

“I’ve had people tell me ‘I cannot afford not to shop at the farmers’ market,’” Karen Ranz, a volunteer with Rutland Area Farm and Food Link said in a “deep dive” session on food access.

Ranz, an alum of the Americorps Vista program, gets by with the help of federal food assistance. She said she recently saw something at a farmers’ market she could both use and afford: vegetables in a basket. They were seconds, selling cheap. She walked away with a giant acorn squash for $1.

Grocery stores and farms around the state have plenty of it. But the way food is aggregated and distributed puts the “seconds” harvest to waste or to compost, she said.

Accessing fresh, locally produced food can be a luxury for some. When a family is living on minimum wage, Berkfield said, the stark reality is that food choices fall below rent or medical care on the scale of priorities.

But access is not just a matter of how much the cash register rings up, he said. Some Vermonters don’t have transportation to get to the grocery store. Others don’t have a stove to cook what food they bring home, or potable water to cook it with.

Gov. Peter Shumlin drew a standing ovation for his opening remarks Thursday morning. He praised the state’s food producers and farmers for growing and crafting the meats, cheeses, maple syrup and beer that is the envy of foodies nationwide.

‘Concealed stories’ of the food system

But Abel Luna, of the organization Migrant Justice, followed up later in the day to tell a very different story of agriculture in Vermont.

Shumlin’s rosy picture "is not the reality I see when I go out to the farms,” Luna said.

Last spring, Migrant Justice successfully lobbied for driving privileges for undocumented workers. They continue to try to bring attention to the living and working conditions of migrant workers, as well as the challenges facing farmers who employ them. 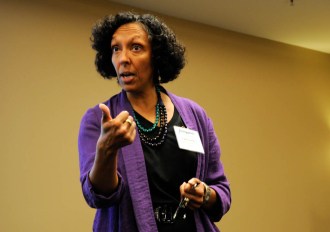 Cynthia Parker, of the Interaction Institute for Social Change, in Massachusetts, led about 40 Farm to Plate gathering attendees on a "deep dive" session about justice and equity in the food system. Photo by Hilary Niles/VTDigger

Cynthia Parker, a senior associate with the Massachusetts-based Interaction Institute for Social Change, described the migrant worker experience as one of many “concealed stories” within Vermont’s food system.

Among Farm to Plate’s goals — in conjunction with developing and supporting agricultural business models — is to reveal the hidden, access the remote, draw out the silent. The approach reflects a broader regional conversation about building racial and social equity into a new food system.

Tom Kelly is founding director of the University of New Hampshire’s Sustainability Institute, home of Food Solutions New England (of which Farm to Plate is an active member). In an interview, Kelly said Food Solutions New England is prioritizing race in food system conversations because, even in predominantly white Northern New England, race is relevant as a fundamental form of discrimination and as the shape of the future.

He also subscribes to a theory (known as “standpoint theory”) that there’s more to learn about any system from the perspective of the most oppressed within it, whether the oppression is based on race, class or other factors.

This “systems” approach is one the state’s top agricultural official subscribest to. Agriculture Secretary Chuck Ross said in an interview that it’s helpful to look at a system — such as food production, distribution and access — comprehensively.

“You begin to understand the complexity,” Ross said. “And when you understand that, you’re able to implement solutions that are more effective.”

'How do we make progress?'

Ross said the migrant worker story should not be a surprise to anyone, because similar stories of hardship and injustice are concealed in every industry.

“The question is, how do we make progress on these things?” Ross said.

Some participants expressed concern that the gathering’s emphasis on food equity and access would generate a lot of conversation, but little action. Part of the challenge is emotional overload, they said. Or not knowing where to start.

Mike Good, a food security program assistant at Northeast Organic Farming Association of Vermont, said another factor makes it hard to bring stories of hardship into the light, especially surrounding agriculture in Vermont: the state’s brand.

At this year’s Farm to Plate gathering, the Vermont brand and the otherwise hidden stories are both on display.

Thanks for reporting an error with the story, "Farm to Plate tackles food equity issues"