Gov. Peter Shumlin gives a speech at the Curtis Awards dinner in Essex on June 20, 2014. Photo by Anne Galloway

Editor’s note: This story is a political analysis.

At a political fete Friday night, the Vermont Democratic Party showed off its deep pockets, star power, organizational prowess and messaging discipline to a crowd of 900 supporters who packed into a cavernous venue at the Champlain County Fairgrounds in Essex. In the process, the party raked in $100,000 for the 2014 election cycle.

Crystal chandeliers hung from the ceiling, rubber chicken was on the menu (albeit with herbs and roasted vegetables), and the space was so big that small tents were arranged on the periphery for beer and wine service and auction items. The black dais for the speeches (which went on for nearly two hours) was expansive and featured two giant projection screens with the magnified faces of Vermont’s political luminaries: Gov. Peter Shumlin, Congressman Peter Welch, Sens. Bernie Sanders and Patrick Leahy, along with the big draw of the evening — Sen. Elizabeth Warren, the outspoken consumer advocate and Democrat from Massachusetts who recently unseated Republican Scott Brown.

The pomp and grandeur was palpable as the Dems in speech after speech made a point of sticking it to Vermont GOP rivals who just six months prior brought the now much-maligned, moderate Republican governor of New Jersey Chris Christie to the same venue for a similar fundraising event. The Vermont GOP soiree was closed to the public, and the press corps was relegated to a distant post in the parking lot in freezing weather.

The Dems didn’t make that mistake. In fact, they appeared to be interested in showing off, even gloating a bit in their triumph. After all, there is a lot to celebrate. The party has plenty of cash in the bank and support from the business community. The Dems hold all but one major office in the state, maintain super majorities in the House and Senate, have a deep bench of experienced politicians in state government, and have obtained buy-in from many of their former rivals in the Progressive Party.

Some of the biggest political donors in the state were on hand (the Stetsons who have been bundlers for Obama, for example), executives of Vermont companies (including FairPoint) and lobbyists from firms that represent some of the biggest corporations in America (KSE Partners, Downs Rachlin Martin).

For all practical purposes, Dems hold all of the congressional seats (counting Sen. Bernie Sanders who, though an independent, votes and campaigns with the Dems) and all but one statewide office — lieutenant governor — which is held by Republican Phil Scott. The Dems share Doug Hoffer, the state auditor, with the Progs.

Meanwhile, Sanders, who has been untouchable in election after election in Vermont, practiced his presidential stump speech. His yet-to-be announced, quixotic run for the presidency is seen by political observers as a tactic that could pull Hillary Clinton to the left. Sanders’ signature issue is the income inequality gap that he says is rapidly shrinking the middle class.

Sanders railed against a new kind of greed in Washington that has put democracy in peril. It was the kind of red meat speech — complete with his characteristic gruff tone and intense gesticulation — that makes a crowd of Vermont Democrats roar.

“What we are engaged in right now is not just an economic struggle and political struggle, it is most profoundly a moral struggle,” Sanders told the Democrats on Friday night. “Our colleagues in the House tell us at a time when we see huge increases in inequality, the most pressing problem in America is to give more tax breaks for the wealthy in this country. We say no.”

The Dems are riding high on a liberal demographic trend in Vermont that is anomalous nationally. While the Democratic Party struggles to hang to U.S. Senate seats in races across the country, Rep. Peter Welch, Vermont’s lone congressman, who has made a career of bucking the Tea Party in Washington, does not have a strong Republican challenger this year. Meanwhile, conservative Republicans continue to push the country further and further right, alienating moderate, Rockefeller-style Republicans in Vermont. The electorate, meanwhile, has a tendency to lump all Rs together.

As Sen. Elizabeth Warren put it on Friday night, battles in Washington are uphill (for liberals) and “they are getting harder every day.” Warren made the case that Republicans in Congress are so far to the right that compromise of any kind are impossible, and as a result, even moderate positions that would ease pressures on middle class Americans are rejected out of hand by the Tea Party tinged GOP.

“Washington is rigged to work for the rich and the powerful, to work for those who can hire armies of lobbyists and lawyers to create giveaways and special deals,” Warren said.

“The parties are further apart than they have ever been, and a lot of pundits like to blame both sides, but I think that’s a wrong way of understanding what happened,” Warren said. “The things we used to do together on education, roads, bridges, medical research, the Republicans just keep cutting. They say there is no money to build a future. At the same time those same Republicans demand that every single tax loophole for billionaires be protected, and they demand that every subsidy for profitable companies continue.”

While the struggle for Democrats in Washington is acute, it’s easy street in Vermont. The Vermont Democratic Party is now so big, so powerful and so rich going into this election cycle that there is little doubt, observers say, that the Dems will hold on to all of the current statewide seats and huge majorities in the House and Senate.

Vermont has four major parties now — Liberty Union, Progressive, Democratic and Republican — but no one in politics has any doubt that the Democrats rule the state and will continue to do so into the near future. The Vermont Democratic Party has practically absorbed the Progressives, has weakened the Republicans to super minority status and the Liberty Union candidates are barely on the fringe.

The final blow to Vermont Republicans is the Dems’ effective capture of the state’s most important business interests. Many big donors who have given to Lt. Gov. Phil Scott are now contributors to Gov. Peter Shumlin, who has made an effort to appeal to fiscal conservatives, and has a $1 million war chest. While the Dems have about $150,000 in the bank (plus the proceeds from the Curtis awards dinner), the GOP has $34,000 left going into the election. 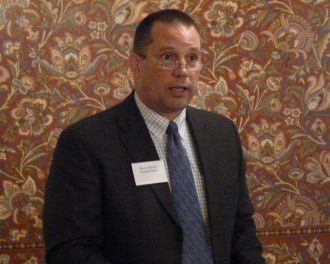 That’s in part why the Vermont GOP couldn’t get a candidate to run for governor until the very last minute. Fundraising this year will be an uphill battle for the Republicans, especially in light of ongoing dissension in the party over messaging. Republicans were recently split over whether a gubernatorial primary would be in the best interest of the party. Randy Brock, the former state auditor who challenged Shumlin in 2012, considered a race, but ultimately decided not to run.

Instead, Scott Milne, a travel company executive and newbie to politics, is running for governor. As of this writing, he has no financial backing to speak of, no website and no campaign manager. Milne has made the rounds with the media, but he hasn’t yet held a press conference announcing his candidacy. His campaign advisers, he said, are his parents, Marion Milne, a former representative, and his father, Don Milne, the House Clerk.

The Vermont GOP, for the first time in decades, did not put up challengers for the other statewide offices — state auditor, treasurer, secretary of state and attorney general.

And Phil Scott, who is the flagbearer for the state Republicans, has been rattled by a challenger from the left — former Progressive state rep Dean Corren, who has tapped into $200,000 in public financing for the lieutenant governor’s race.

At the Vermont GOP committee meeting on Saturday morning, Dave Sunderland gave party members a tough love speech in which he urged Republicans to get away from the “gotcha” style, negative politics that marked the 2012 election cycle.

Sunderland, in carefully prepared remarks that were distributed to the press, acknowledged just how far the party had fallen — just four years after Republican Gov. James Douglas retired — and how long it will take for the GOP to regain momentum.

“From a Republican Governor, Lt. Governor, Auditor, a majority in the House, and a strong Republican presence in the Senate — to superminority status in both chambers and only a single statewide elected official today, that slide is painfully clear,” Sunderland said. “But it’s not really about the impact of this change on our party. What’s most concerning, to me, and I suspect you, is the impact that this slide has had on our fellow Vermonters.”

Sunderland went on to describe how Democrats have raised property taxes by $100 million over the last two years and have embarked on a failed $72 million health care exchange system.

Other Republicans pointed to the “crisis of affordability” in Vermont as an issue that could resonate with the electorate, and they described the Shumlin administration’s proposal to create a government-funded health care system as a risky endeavor that could put the state’s economy in a precarious position.

Still, message discipline and unified passion for the party platform was noticeably absent on Saturday, and candidates didn’t explain what alternatives they would offer or how they would pitch their issues to voters. Phil Scott talked about his own fundraising woes and how offended he was by protestors who interrupted a speech by Condoleeza Rice at Norwich University on Friday.

Milne explained that he wants to run a positive campaign and hopes to refrain from direct criticism of Gov. Peter Shumlin. The governor, he said, is not doing an “adequate” job.

“If I thought he was doing an adequate job in managing the things he started, I would have sat this one out,” Milne said. “But I don’t think the direction we’re going is good.” What direction Milne would take if he were at the helm is not yet clear. The travel agency executive is still adjusting to his new role as a Republican gubernatorial candidate and when asked if he would offer his own alternative plans for the Shumlin administration’s single payer health care system, he said he didn’t know.

Milne’s speech devolved into a tangent about raising rabbits as a kid and what he thought was a funny anecdote about how much his aunt enjoyed watching the rabbits breed. The joke fell flat.

An attendee at the committee meeting, George Schiavone, described the current political environment for Republicans as “target-rich.” The question is whether they can find the weaponry to aim before November.

CORRECTION: There are three Republican challengers for Peter Welch’s seat, none of whom have strong backing from the national GOP.

Thanks for reporting an error with the story, "Analysis: One party rule?"