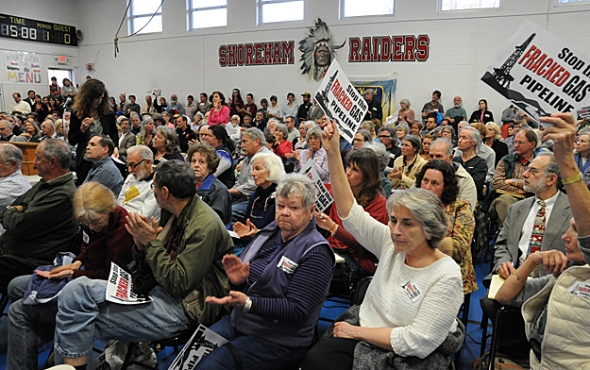 Editor's note: This article is by John Flowers of the Addison Independent, in which it was first published May 8, 2014.

SHOREHAM — More than 170 people flooded the Shoreham Elementary School gym on Wednesday evening to weigh in on a controversial plan to extend a natural gas pipeline from Middlebury to the International Paper Co. mill in Ticonderoga, N.Y., with most of the speakers urging state regulators to deny a permit for a $70 million project for environmental and public safety reasons.

Wednesday’s gathering was one of two public hearings that the Vermont Public Service Board (PSB) will convene to receive testimony on Vermont Gas Systems’ proposed Addison-Rutland Natural Gas Project “Phase II” pipeline that would extend from Middlebury, through Cornwall and Shoreham, under Lake Champlain, to the IP mill.

More than 60 people signed up to speak at the PSB hearing in Shoreham. The vast majority of speakers urged the board to reject the Phase II plan, arguing, among other things, that the project would largely benefit two out-of-state companies (IP and Vermont Gas, the latter of which is based in South Burlington and which is owned by Gaz Metro of Montreal) while potentially placing area residents and Lake Champlain in environmental peril if the pipeline were to rupture.

Also testifying were some New York State economic development officials who touted the Phase II pipeline as a way of providing more financial stability to IP and the more than 600 jobs it provides in the North Country. Some Shoreham residents also spoke favorably about the pipeline, saying natural gas could encourage business growth in the village while allowing some homeowners to save some money on their heating fuel bills.

Thanks for reporting an error with the story, "Opponents pack PSB hearing in Shoreham on Phase 2 of Vermont Gas pipe..."