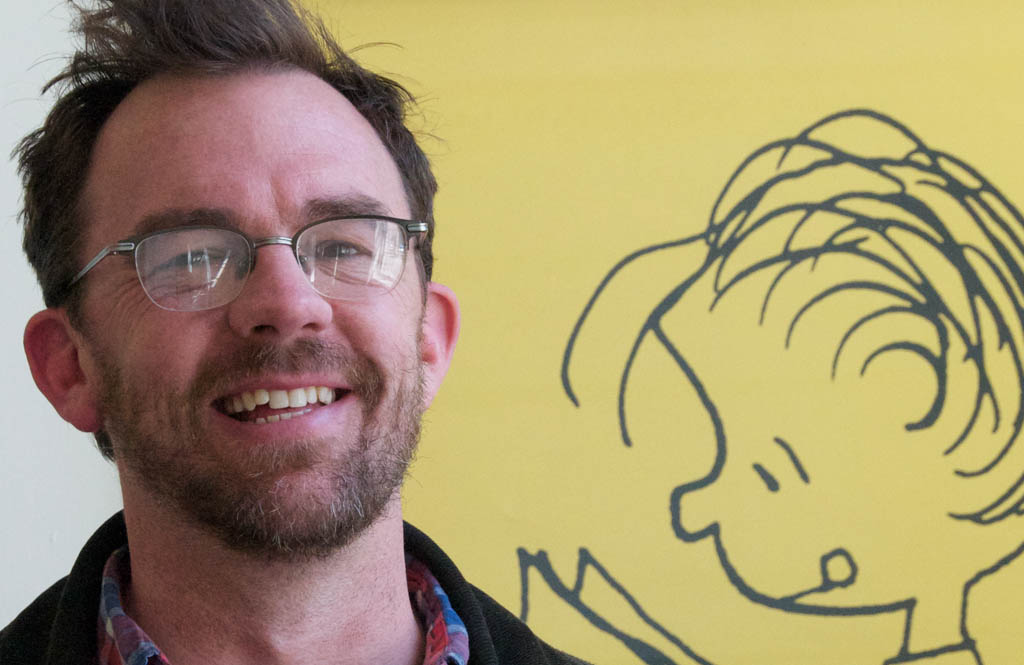 Jason Lutes, author of graphic novels on Weimar Germany, poses outside the Center for Cartoon Studies library, which was funded by the family of “Peanuts” creator Charles Shultz. Photo by Dirk Van Susteren

In This State is a syndicated weekly column about Vermont’s innovators, people, ideas and places.

Roughly 4,000 comic panels completed, maybe 1,500 to go. For 16 years, Jason Lutes has been working on a trilogy on Berlin, Germany, through graphic novels offering a serious look at the culture, economy and darkening politics of the Weimar Republic, the period between 1919 and Hitler’s power grab in 1933.

The first two published books, “Berlin: City of Stone” and “Berlin: City of Smoke,” were a success from a critical and presumably a financial standpoint, since they have appeared in 16 languages, including Serbian and Korean. The final book will be out next year.

“Well, maybe late next year,” Lutes says with a laugh. 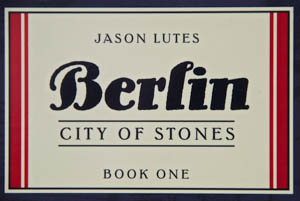 A cover section of Jason Lutes' first book in his Berlin trilogy.

Lutes, 46, lives in Hartland with his significant other and their two young children. He says he’s best working where there’s a gentle buzz, commotion but not interruption. Look for him sketching on his pad at a coffee shop near home or work, say, at the Trap Door Café in Quechee, or the Tuckerbox Café in White River Junction.

The latter is just a short walk from the Center for Cartoon Studies, where Lutes has been employed for the past few years as an adjunct professor after years of cartooning work in Seattle.

Or find him, as his students do, drawing characters and composing word balloons with pen in his high-ceiling office at the old brick bank and post office on Main Street, where the cartoon school – it has some 35 masters-of-fine-arts students – recently expanded.

Lutes labors obscurely, yet he’s clearly got loyal fans, many of whom likely think of cartoonist Art Spiegelman when they read one of the Berlin books. Spiegelman gave literary comics a tremendous boost when he won a Pulitzer Prize in 1992 for “Maus,” his memoir-biography on the Holocaust in which he drew Jews as mice and Nazis as cats.

Spiegelman’s breakthrough, Lutes says, inspired him greatly when he was a student at Rhode Island School of Design in Providence. Back then he was fumbling with his artistic talents, wondering where his ability might take him, if anywhere, wondering whether he should become a painter when all he really wanted to do was draw comics. 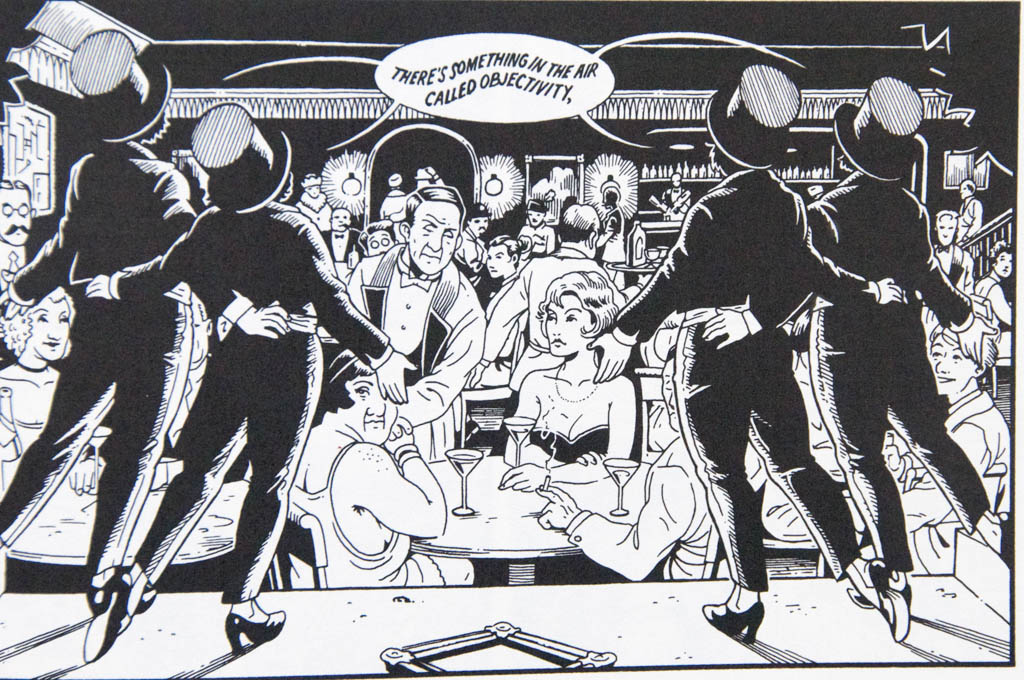 Cabaret performers dance and sing their praise to the “New Objectivity,” an art form popular in Germany in the 1920s. Photo by Dirk Van Susteren

There’s nothing comical in the comedic sense about Lutes' Berlin series. The first two books and the upcoming third offer a glimpse of a city in turmoil during a time when, Lutes points out, Germany was agonizing over its future: go communist, remain on a democratic path, or, as it did, embrace fascism.

“Think of (“Berlin: City of Smoke”) as the graphic novel equivalent of a foreign film, slow perhaps, but well acted and beautiful,” said a review a few years back in the Washington Post – words that Lutes' publisher, Drawn & Quarterly of Montreal, highlighted on the book’s back cover.

Time magazine complimented “Berlin: City of Stones” for its density that’s “equal to the best of novels,” and said Lutes’ “clean European drawing style” compares favorably to that of Herge (pen name for George Remi), the Belgian creator of Tintin, one of Europe’s most popular 20th-century cartoon characters.

Like Spiegelman, Herge inspired Lutes. But that was back even earlier, when Lutes was growing up in Missoula, Montana, where his father taught French literature at the university. As a child, Lutes went for the super-heroes, like “Captain America” and “Kid Colt,” but also, being from an intellectual family with European interests, he was introduced and encouraged to follow Tintin, the boy adventurer, that fellow with the brushed-up hair and dots for eyes, who with his terrier Milou, traveled the world solving crimes.

Though not a comic, the “Star Wars” movie in 1977 must have had some influence on him as well, Lutes says, though he is not sure how. He saw the film 22 times.

By contrast, Lutes' Berlin trilogy has no heroes, much less superheroes. Instead it features a collection of mostly unrelated characters, many suffering, some regaling in the night life of a city that by the late ‘20s had become a most exciting cultural center, a rival to Paris. But it was also a metropolis with dark undercurrents, the result of bitterness at losing World War I, political instability, inflation and widespread joblessness triggered by the Great Depression.

Lutes' books, with panels drawn in black and white, reflect a Berlin where nuance was little valued. Its several story lines are integrated largely by historic events, like the communist march on May 1, 1929, when police shot and killed 25 demonstrators.

His fictional characters range widely. There’s Kurt Severing, a bespectacled newspaperman, who is filled with foreboding about the country’s future, and Marthe Muller, a less-serious young woman from Cologne, whom Severing meets on a train, and with whom he forms an attachment.

Among others: a Jewish family suffering from anti-Semitism; a financially strapped father of three who joins the National Socialists, and his wife who is drawn to communism; a banker who shoots himself as he realizes he’s broke; a wealthy socialite; cabaret performers; a coterie of artists stuck on discussing the merits of the “New Objectivity,” the artistic trend against Expressionism; a visiting African-American Jazz band, and fascist ruffians who with one hand throw punches and with the other hand out inflammatory street literature.

There are bedroom scenes, urban scenes of alienation, a lesbian nightclub scene, and a nightmare scene of trench warfare, with thunderous gunfire and explosions expressed, as you would find in any comic, in bold-face, all-capitalized word-noises, like “KRM!” and “KRWK!” 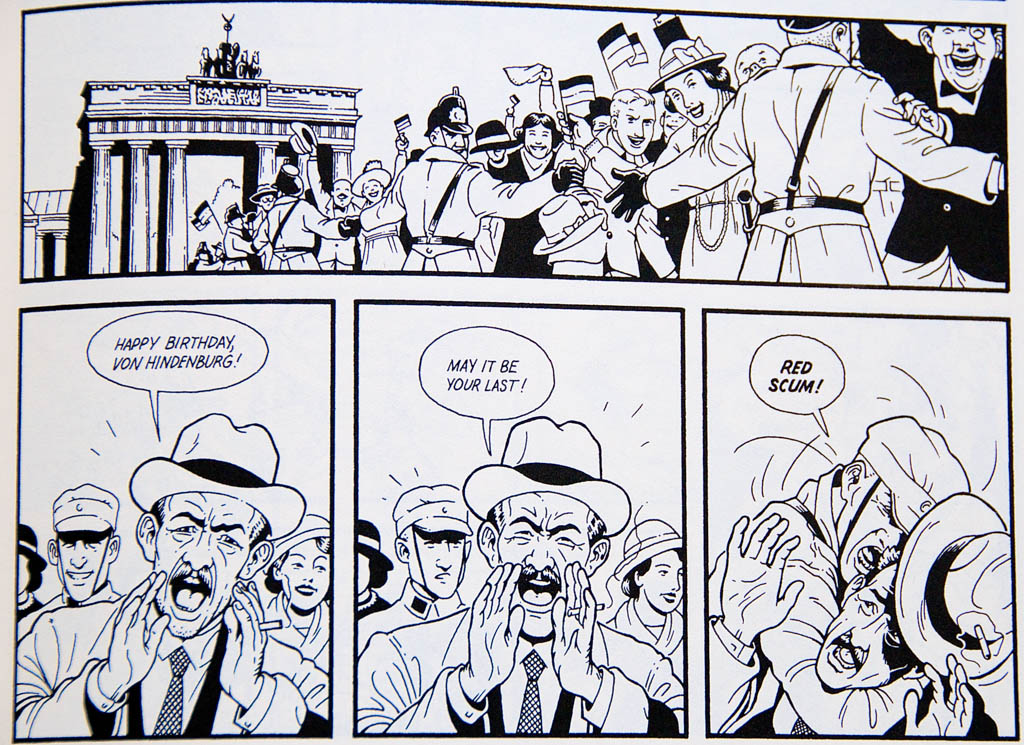 Lutes' books are peppered with references to figures of the time, from American performers Harry Houdini and singer and dancer Josephine Baker, both of whom appeared on stages in Berlin, to German artist George Grosz, to Nazi hero Horst Wessel to German President Paul von Hindenburg.

Lutes had sort of a ‘KABOOM’ moment himself back in 1996, when he came across an ad in the Nation magazine. The ad was for a book, largely of photographs, “Bertolt Brecht’s Berlin: A Scrapbook of the Twenties,” which Lutes bought, and that hooked him.

He read every other book on the era that he could find, viewed films, and perused primary sources. At the University of Washington, he found maps of Berlin before World War II. He found a book by German photographer August Sander that chronicled Germans in all walks of life in every-day scenes.

One “great influence” was Alfred Doblin’s “Berlin Alexanderplatz,” which Lutes describes as a city portrait, “a very impressionistic novel,” one that provided him with practical information “from magazine ad slogans to the words of radio broadcasts” that he could weave into his panels.

Interestingly, Lutes attributes his preoccupation with Weimar Berlin to “a lousy public education.” In high school, after he had later moved to California, he got the obligatory Holocaust “jolt,” in the form of a film showing bulldozers pushing bodies into mass graves. The images were horrifying, but there was little explanation. “No follow-up,” says Lutes.

And at RISD, there was little chance to study history.

“So this project was sort of my self-education,” he says.
“The decision to make the book was my unconscious effort to put myself in a position to figure out what went on.” Thanks for reporting an error with the story, "In This State: Jason Lutes draws on history for his Weimar trilogy"