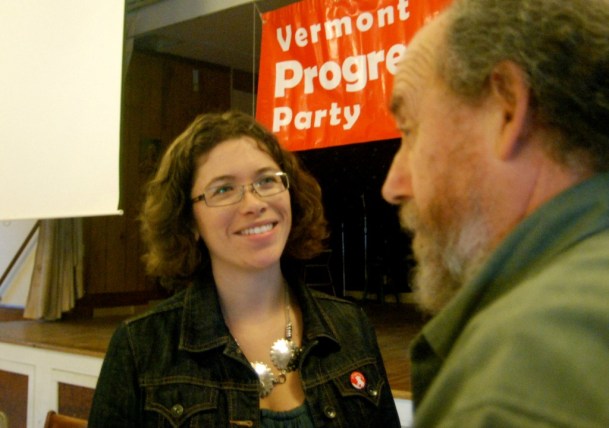 Emma Mulvaney-Stanak was elected to be chair of the Vermont Progressive Party during an annual convention at the Capital City Grange in Montpelier on Saturday. Photo by John Herrick

Democratic Gov. Peter Shumlin could face a third-party challenger in next year’s election if he does not support a progressive tax reform and an increase in the minimum wage, says the newly elected chair of the Vermont Progressive Party.

Emma Mulvaney-Stanak, who has been serving as the party’s secretary since April, was elected to chair the Vermont Progressive Party during its annual convention at the Capital City Grange in Montpelier on Saturday.

Mulvaney-Stanak said it is still too early to decide whether the cash-strapped party will field a gubernatorial candidate in 2014, but the party’s new leader is prepared to take her economic justice campaign statewide.

“I hope the governor sees this an opportunity to step it up for working people,” she said. “And if he doesn’t, he might have a challenger.”

The Progressive Party backed Shumlin in the last gubernatorial race, largely due to financial constraints. The party is now vowing to not support any Progressive candidates who accept campaign donations from corporate entities.

In her new position as chair, Mulvaney-Stanak says she will recruit more young people and women into the party. She will also expand the party’s campaigning capacity by increasing its financial stability and online strategy, she said.

Mulvaney-Stanak was elected to the Burlington City Council in 2009. She represented Ward 2 for a half term, before moving to Ward 3, where she ran again, was elected and served a full two-year term. Currently living in Winooski, she is an organizer with the state teachers union, Vermont-NEA.

After 12 years as chair of the Progressive Party, Martha Abbott resigned from the position. Abbott was elected to be the party’s treasurer. 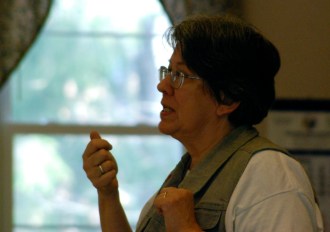 Martha Abbott, who resigned as chair of the Vermont Progressive Party after 12 years, was elected as the party’s treasurer during its annual convention at the Capital City Grange in Montpelier on Saturday. Photo by John Herrick/VTDigger

About 120 people attended the convention to elect the party’s new leadership and discuss its upcoming agenda. The election of the party’s future leadership was uncontested across all positions. However, the future of its platform – which was not formally updated last year – was uncertain.

Ed Stanak, a retired state environmental official who lost as a Progressive candidate for Vermont attorney general last year (and Mulvaney-Stanak's father), said the party’s platform must be revised.

“I think we have a rusty, outdated platform,” Stanak said. “So going into the legislative session, I think there are – I feel strongly there are issues that could be framed better.”

Progressive lawmakers, who represent both their districts and their party, said the party’s delegation can voice their mandate throughout the legislative session.

“Talk to us,” said Sen. David Zuckerman, P-Chittenden, before he later detailed his own platform.

Zuckerman, who is vice chair of the Senate Agriculture Committee, said he will be bring the debate on GMO labeling to the Statehouse this session. Washington state voters last week defeated a genetically modified organisms labeling measure, which, he said, puts some weight on his shoulders.

Sen. Anthony Pollina, P-Middlesex, said he will move the discussion of a state bank forward this session.

Pollina, who is co-chair of the Senate Government Operations Committee, wants to know how much money the state could save if it kept its money in a state bank.

Pollina suggested taking 10 percent of the money currently in TD Bank, the state’s primary depositor, and hold it with the Vermont Economic Development Authority (VEDA), a quasi-governmental agency that borrows money from the state and private market before distributing loans to Vermont businesses.

Democratic State Treasurer Beth Pearce has stated she likes the idea keeping public investments local, but does not think the solution is a state bank.

Other issues on Pollina's radar include fossil fuel divestment from the state’s retirement funds and a reduction in the cost of education with a “pay it forward” system, which would eliminate upfront tuition costs and allow students to pay back their tuition as a percentage of their income after they graduate.

The discussion of a single payer health care system, one of the premier platform items for Progressives in recent years, was brief.

Rep. Chris Pearson, P-Burlington, who leads the Progressive Caucus in the House, said the momentum for single payer continues. Meantime, the administration is struggling with technical challenges on the state-run insurance exchange website, which Pearson described as a “fiasco.”

“It’s a little gloomy right now, but people are not giving up yet,” said Pearson, who serves on House Health Care Committee. “Health care is a public right and a public good, and we will continue pushing there.”

The party’s convention was adjourned and set to reconvene at the next state committee meeting, at which point the party will formally adopt a revised platform, Abbott said.

Selene Colburn will serve as the party’s new vice chair. She was campaign manager for Rachel Siegel’s successful run for Burlington City Council and she was the social media coordinator for Hoffer’s campaign.

Chris Brimmer, currently a zoning administrator in Fairlee and county committee chair for the party, will serve as secretary.

This article was edited at 10:12 p.m. on Nov. 10 to correct details of Emma Mulvaney-Stanak's terms on the Burlington City Council.

Thanks for reporting an error with the story, "Progressives elect Mulvaney-Stanak chair, outline agenda"