An investigation by the state auditor has raised questions about whether the Department of Corrections is keeping adequate tabs on its transitional housing program. The inquiry, spurred by a whistleblower’s allegations, found “significant risks of potential abuse and waste of taxpayer dollars.”

While the investigation focused on a single entity — Seall Inc., a 14-bed facility for men in Bennington — Deputy State Auditor Susan Mesner said, “There was certainly evidence that the problems could very well have been more widespread.”

The DOC gives grants to 38 different facilities to make a total of 239 beds available for offenders coming out of prison. 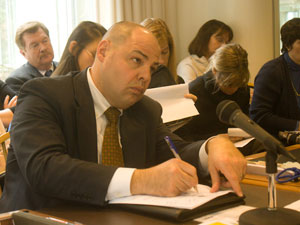 Andrew Pallito, commissioner of the Department of Corrections. Photo by Terry J. Allen

The difficulty of finding suitable housing situations for offenders has long been a concern, but the auditor’s report brings a different problem to light — communication failures and a lapse of oversight of the housing options that do exist.

The auditor’s report — which is not an official audit — dredges up seven issues, ranging from what offenders are being charged for rent to the DOC’s failure to inform Seall of the conditions of release for the offenders they house.

There were other minor issues, Mesner said, but “I reduced the report down to what I felt were the most critical issues.”

Mesner sent a letter to DOC Commissioner Andy Pallito on July 24, detailing the auditor’s concerns. Pallito postmarked his reply three weeks later, addressing those concerns, one by one, and outlining a “remedial action” plan for each.

Mesner said she’s been pleased, so far, with the department’s response.

“I think it was evident he [Pallito] took the letter and the issues we raised very seriously.” And if the department’s “remedial actions” prove insufficient? “When I spoke with Commissioner Pallito, he understood very well that we can at any time go in and do a full blown audit on any of this,” Mesner said.

Derek Miodownik, the DOC’s new transitional housing, community and restorative justice executive, said the department is taking the findings to heart and is already making changes to the program.

Miodownik acknowledges that the DOC needs to do a better job of “documentation and communication,” but he said he doesn’t think the auditor’s report shows serious signs of mismanagement. Transitional houses, local probation and parole offices, and the DOC communicate regularly with one another, according to Miodownik — the main problem is that they haven’t been documenting that communication.

“I think the findings of the inquiry were important in terms of spotlighting areas that definitely need improvement from a public perspective of knowing that the resources are being well used,” he said.

Miodownik said it’s unlikely those communication lapses are limited to Seall. “Just because this hasn’t been spotlighted somewhere else doesn’t mean there aren’t other areas for improvement,” he said.

Mesner’s letter lists a number of recordkeeping requirements that appear to have fallen by the wayside.

When an offender enters the program, Seall is supposed to complete what’s called a “case management assessment” within two business days. Mesner found no written evidence that “any assessments were ever done,” and reports that the Seall director was unfamiliar with the requirement. Offenders are also supposed to have individual case plans, maintained by Seall and the probation and parole office. These, too, were found to be nonexistent.

Seall is also supposed to keep records of offenders’ progress in a database shared with the DOC. Mesner checked the database for six offenders in Seall’s care and, again, found no evidence of such records.

In all three cases, Mesner reports that there was no sign that DOC had attempted to enforce recordkeeping.

Pallito, in his letter, says that the DOC will start requiring housing grantees to keep plans for each offender that “outline identified services to be delivered as well as frequency and type of service dosage …” The department relies on probation and parole offices to stay abreast of the services that offenders receive, Pallito said, but his staff will develop metrics to keep better tabs.

The communication logjam goes both ways — the investigation cites an interview with Seall’s director, who said he doesn’t receive information about the conditions of release for the offenders unless he asks for it. The report points out that DOC can’t expect Seall staff to enforce conditions, if they don’t know what they are.

Pallito said probation and parole offices have “recently ensured” that they send this information to transitional houses.

Transitional housing is, by its nature, temporary, and the goal of the program, according to the grant agreement between Seall and the state, is to have offenders leave Seall after 120 days and move to an apartment, with less supervision, for a maximum of 90 days. The auditor’s office found that 25 percent of offenders stayed on past the cumulative 210-day limit, and 9 percent had failed to leave the program after 400 days.

DOC and Seall staff acknowledged that they don’t have a procedure in place to re-evaluate offenders who haven’t moved out of the program in a timely fashion.

The investigation also uncovered a quirk in the program that sometimes leads the state to pay for two beds for one offender. If someone in a housing program gets re-incarcerated and the department expects the prison spell to be brief, it will reserve the bed in the interim. The report notes, “there appears to be no written policy regarding how long beds will be held.”

Pallito writes in his letter that the DOC will create a template to “standardize statewide expectations … including when a bed hold is appropriate.” Miodownik said that effort is already underway.

The report also raised questions about whether Seall employees should undergo background checks — not a requirement, currently — and whether the facility is handling rent agreements appropriately. Winchester told Mesner that offenders are sometimes charged more than the flat $50 a month fee — as high as $300 in at least one instance — if he believes they are mismanaging their money, but the additional money is returned to the offender at a later date.

Miodownik said rent agreements have to be arranged on a case-by-case basis but the department is now going to require all of its housing facilities to document how those decisions are made in the same way. “By tightening up this clarity, we’ve eliminated some of this wiggle room or gray area that allegedly sets up this kind of space where funds can go unaccounted for.”

The auditor’s office will keep an eye on the program, Mesner said. But it won’t launch a full-blown audit unless Pallito’s “remedial action” plans fall through.

“Certainly the transitional housing is an important program for the state, and we will continue to monitor things, and I think at some point if we think it would be worthwhile, we will do that [a formal audit],” she said. “We want to give the commissioner time to address the concerns.”

The auditor’s report can be found here.

Thanks for reporting an error with the story, "Auditor’s report uncovers problems with transitional housing si..."