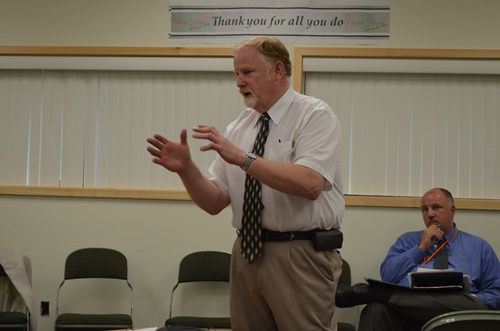 DCF Commissioner Dave Yacovone addresses advocates at a meeting at the Agency of Human Services Tuesday. Deputy Commissioner Richard Giddings is sitting behind him. Photo by Alicia Freese/VTDigger

WILLISTON -- The Agency of Human Services has put a less restrictive plan on the table for determining when homeless people can check into a motel on the state’s dime. Advocates are welcoming the agency’s about-face and they say the new plan is “light years” better than a prior proposal.

There were lingering concerns about certain vulnerable populations who might fall through the cracks, but most of the advocates at a meeting Tuesday, where agency officials unveiled the new plan, were relieved to see the stricter proposal shelved, and the mood was markedly more congenial than it’s been at past gatherings.

The Department of Children and Families (DCF), which falls within the Agency of Human Services, has been struggling to develop rules to reel in its motel voucher program. The program, which puts homeless people up in motels when nearby shelters are full, cost the state $4 million in Fiscal Year 2013. The year before it cost $2.2 million.

In response to the ballooning budget and anecdotal evidence of people abusing the program, the Legislature gave DCF a mere $1.5 million to work with in FY 2014. That prompted the department to construct a point system that would have restricted the program to people who score six points or higher across 11 categories. Advocates described the point system as “draconian” and said it would make it nearly impossible for vulnerable Vermonters to obtain motel vouchers.

The new plan keeps the same point system in place, but it lowers the bar for qualifying — with only four points needed instead of six. And, more significantly, it opens up the program automatically to people who fit any of the following criteria:

• is 65 or older;
• has a child age 6 or younger;
• is in the third trimester of pregnancy;
• has applied for or received SSI or SSDI (disability benefits).

DCF commissioner Dave Yacovone described the changes as a “significant modification,” and said he expects it will exclude able-bodied individuals while keeping families and disabled or elderly people in the program.

Linda Ryan, executive director of the Samaritan House, a shelter and transitional housing nonprofit in St. Albans, told agency officials, “I think we are way ahead of where we were to begin with. You’ve done a tremendous job of listening to us and adapting.”

Advocates weren’t taking full credit for the turnaround, however — several said behind-the-scenes support from Gov. Peter Shumlin was key in helping nudge the agency toward this solution.

But, there’s still a possible hitch. By bringing advocates on board, the agency cleared one hurdle, but it might have created another at the same time.

The new plan could put the department over budget. Right now, DCF is estimating that it will spend between $1.5 million and $2 million on temporarily housing people in motels. That number would be roughly twice as high if DCF weren't also pursuing several cost-cutting measures — such as limiting motel stays, which previously could last up to 84 days but now will be capped at 28 days — at the same time. Still, Secretary of Human Services Doug Racine said it’s “high likely” they will exceed the budget. Agency officials also stressed that their budget estimates were very rough.

It’s very early in the fiscal year for a department to be planning to overspill its budgetary bounds. Racine said he is trying to take the legislative pulse, and is calling key lawmakers to see whether they are willing to dig a bit deeper into the state’s purse during the budget adjustment process that takes place midway through the fiscal year.

“We are out on a limb,” Racine said. “There’s a little bit of a risk in what we’re doing.”

The risk comes if the Legislature turns down the department’s request for more money.

Sen. Claire Ayer, D-Addison, has spent time scrutinizing the motel program as chair of the Health and Welfare Committee. Ayer said there’s space for a compromise, but she’s not sure lawmakers will back this particular approach.

“The sentiment of the Senate was that the money was being spent in the wrong places and we needed to tighten up on how we do that, but we also need to have flexibility. I’m not sure the Senate is going to buy it, but we’ll have to see more details,” she said.

Ayer said the new proposal doesn’t have the flexibility she had hoped for. The four categories that DCF has decided deserve blanket eligibility align with the categories the Legislature outlined in the budget bill. But Ayer said the intent wasn’t to let in everyone in those categories. (Agency officials and advocates have disagreed about what exactly the Legislature’s intent was when it limited the budget but also asked the department to continue serving vulnerable people in those four categories.)

“I hadn’t imagined that anyone over 65 would qualify. That’s kind of big leap. I’ll be 65 in several weeks, and I shouldn’t qualify,” Ayer said.

Rita Markley, director of COTS, a Burlington shelter, and several other advocates raised concerns about families with children over age 6. They’ll get two points under the point system.

“I don’t think Vermont wants to have homeless school-age children, and I don’t think you want that,” Markley told the agency officials.

Several advocates asked Yacovone to consider a waiver option that would allow the department to make exceptions for clearly vulnerable people who don’t fall into any category.

“Not to have that in your toolbox is really confining,” said Joe Patrissi, executive director of Northeast Kingdom Community Action and a former deputy commissioner in DCF. Yacovone replied that this would create a slippery slope, making it difficult to turn down many requests.

Clarification: This story was updated at 8:00 A.M. to clarify the explanation of what the program will cost. It would have cost $3.4 million if DCF wasn't making any other changes to the program. DCF is planning to save between $1.5 million and $1.8 million through several additional cost-saving measures, however, which it expects will bring the total program cost to between $1.5 million and $2 million.

Thanks for reporting an error with the story, "State peels back restrictions on motel vouchers for homeless"