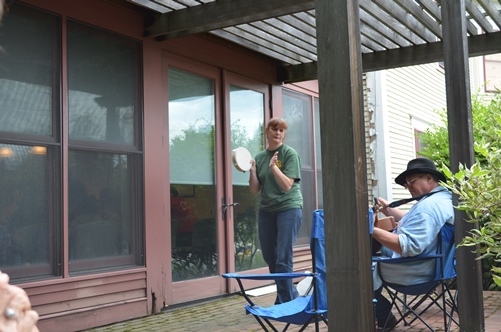 VSEA members play music to protest the first of four executive sessions ordered by the board of trustees at the union's headquarters in Montpelier on Monday. Photo by Alicia Freese/VTDigger

An investigation into alleged wrongdoing on the part of the Vermont State Employees Association’s executive director ended Monday with his reinstatement and the resignation of two of the union’s three lawyers.

Several hours after reinstating Executive Director Mark Mitchell, who was fired last month, the union’s board of trustees announced that Michael Casey and Abigail Winters, who aired the allegations against Mitchell, would voluntarily leave their respective posts as general counsel and associate general counsel.

The board abruptly fired Mitchell in early June on a 10-5 vote that came after Casey and Winters presented them with a series of allegations, the substance of which remains undisclosed. Several days later, after doubts surfaced about the validity of those claims and complaints were raised about the firing process, which didn’t give Mitchell a chance to defend himself, the board reversed its decision and voted to bring Mitchell back but to place him on paid administrative leave until an independent investigation had been completed.

After reviewing the investigation’s findings, the board announced Monday that “the charges against Mitchell do not warrant dismissal by this body.”

And, in the following paragraph of the same news release, it noted the departure of Winters and Casey, emphasizing that the pair would be leaving on amicable terms. “They will leave VSEA on Aug. 2, 2013 in good standing. VSEA thanks them for their years of dedication and good service to the union.”

Just before noon Monday, tambourines jangled outside the VSEA headquarters in Montpelier. A man strumming a guitar sang ad lib tunes about the union, the board and the absence of transparency.

The melodic racket came from a few union members who were protesting the board’s decision to go into an executive session, preventing non-board members from listening to the discussion.

Inside a screened-in porch, separated from the protesters by only the see-through walls, the board discussed whether it should bring back Mitchell.

Several hours later, the board emerged from its fourth executive session with the news that that not only would Mitchell be reinstated but Casey and Winters were resigning voluntarily.

The board’s news release sought to reassure members after the divisive incident.

“VSEA is determined to put this incident behind the union and continue to do what VSEA does best, which is to effectively represent state employees on contract and workplace issues and advocate for workers at every level,” it said. “The VSEA membership remains solid and committed to moving forward and making VSEA even stronger.”

But the leadership purge may not be over. Several sources say they expect a thorough shake-up of the board when the members come up for re-election in September.

The protesters on VSEA’s front lawn are one indication that the dissatisfaction, which originally centered on Mitchell and now seems to have landed on Winters and Casey, might also spread to the body charged with handling that dispute.

Winnie Rose, one of the protesters, said she was pleased that the board chose to reinstate Mitchell, but its handling of the affair has left a bad taste in her mouth.

“The only way for the board to rectify this is transparency, and they are not on board with that.” Rose, who said she drove nearly three hours to attend the meeting, said the board’s secrecy has been “unacceptable.”

During the board meeting that led to Mitchell’s temporary dismissal, VSEA spokesperson Doug Gibson said the executive session was necessary because the topic at hand had been a personnel issue.

Thanks for reporting an error with the story, "Update: VSEA director Mark Mitchell reinstated, lawyers involved in h..."

What you need to know for Vermont’s 2022 primary election