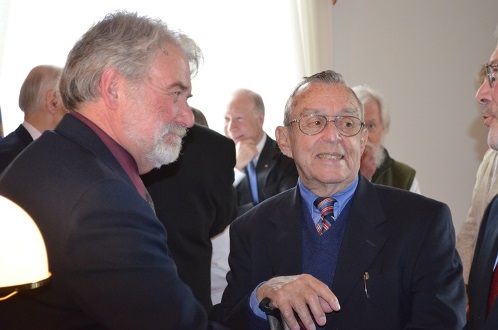 A decade of lengthy and divisive debate ended Monday when Vermont became the first state in the U.S. to enact legislation allowing terminally ill patients to obtain medication to help them end their lives.

In a room jam-packed with lawmakers and supporters of the so-called physician-assisted death bill, Gov. Peter Shumlin signed into law S.77, which takes effect immediately.

The bill grants doctors civil and criminal immunity if they follow a series of required steps before prescribing a lethal dose of medication to a patient with a life expectency of fewer than six months who requests it. The steps include ascertaining that the patient is capable of making the decision and can self-administer the medicine. The requirements expire after three years, by which point lawmakers hope doctors will have developed their own guidelines.

Shumlin told the crowd, “This bill does not compel anyone to do anything that they don’t choose in sound mind to do. All it does is give those who are facing terminal illness, are facing excruciating pain, a choice in a very carefully regulated way.”

Shumlin and House Speaker Shap Smith praised lawmakers for positioning themselves at the vanguard of “patient choice.” Oregon and Washington passed similar laws through referendums and a court decision prompted a law in Montana, but Vermont is the first state to pass the measure through the legislative process.

Attorney General Bill Sorrell predicted that court action could compel other states to follow in Vermont’s footsteps. “Quite frankly I see litigation in the future. This could be the next, or a next, big civil rights issue,” Sorrell said.

Sorrell said that like race and gender orientation issues, he expects the tide of changing public opinion — propelled by aging baby boomers — will prompt the Supreme Court to act on the issue. “I see this being another of those civil rights where the mood in the country changes and the judiciary will follow suit.”

The president of Patients Choice Vermont, Dick Walters, who spearheaded an 11-year push for the legislation, said in a statement, “Vermont has taken a huge step forward for the autonomy rights of terminally ill patients.”

Vermont hospitals are not jumping on board just yet, however. S.77 gives health care facilities the option of prohibiting their staff from prescribing a lethal dose of medicine to patients who are staying at the facility.

And most hospitals will take advantage of that option, at least in the short term, according to Jill Olson, vice president of policy and legislative affairs for the Vermont Association of Hospitals and Health Systems (VAHHS).

Fletcher Allen — the state’s largest hospital — informed its staff Friday that it is enacting an interim policy to prohibit the practice for patients on its premises.

That policy will stand until the Ethics Committee and hospital leadership has had a chance to work through the “unique issues from an ethical standpoint” that the legislation poses, according to chief medical officer, Dr. Stephen Leffler.

Olson said the quick turnaround — the Legislature passed the bill on May 13, and Shumlin signed it one week later, making it effective immediately — is leading many hospitals to prohibit the practice.

“I’m certain that we’ll have many [hospitals and health facilities] that use the exemption because of the quick implementation time frame,” Olson said.

Even two weeks, Olson said, would have allowed hospitals to consult their ethics committees ahead of time. 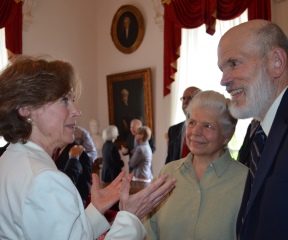 But Sen. Claire Ayer, D-Addison, who played a key role shepherding S.77 into law, said the quick turnaround was necessary for procedural reasons. Normally, a bill has to sit in the Senate for 24 hours after passing. With S.77, the legislative session would have ended before the clock ran out. The only way to expedite the process was to have the governor to request the bill, but when he makes that sort of request, he has to sign the bill within five legislative days. Ayer said they chose not to delay the effective date within the bill itself because “there are people who want it now, and they’ve been here day after day hoping that when its time for them they’ll have that option.”

Health Commissioner Harry Chen said he doesn’t think the hesitancy among hospitals will be a setback because it’s unlikely that hospital patients will avail themselves of this option. Chen said information from Oregon shows most people who take the prescription do so at home.

Scattered among the law’s jubilant supporters was a somewhat sparser crowd that’s also been omnipresent at the Statehouse during the debate over the bill. Opponents of the legislation, each identified by a round orange sticker, said they resented the event’s festive atmosphere given the risks that accompany the law.

Mary Hahn Beerworth, a member of Vermont Right to Life, said, “I think they have a nerve being here today, having a party and celebrating when they have just floated vulnerable Vermonters out there at serious risk at feeling pressured into asking and requesting for a lethal dose of medication and then being bullied into taking it.”

After today, supporters and opponents are both pivoting their attention away from the Legislature and toward providing the public with information.

The Vermont Medical Society, which lobbied against the bill, is now focusing its efforts on telling physicians what they need to know about S.77. There are 15 steps doctors have to follow if they’re to receive civil and legal immunity, according to VMS executive director Paul Harrington.

“We are basically trying to let physicians know their responsibilities if they choose to prescribe a lethal medication,” he said.

The Department of Health will also be distributing information regarding the requirements.

True Dignity Vermont is taking a different tack. Carrie Handy, a board member for the anti-assisted suicide group, said they are refashioning the advocacy shop as a watchdog organization. They are launching a hotline for people to report abuse — opponents are concerned that vulnerable adults will be pressured to request a prescription — and they have plans to start a registry of “’safe’ doctors, nursing homes and other health care providers.”

“There are a couple of physicians who have come out strongly in favor of this legislation. Obviously they would not be on our registry. We hope to be able to get physicians on record saying they would not participate,” Handy said.

Chen said one of the potential “silver linings” of S.77 is that it will spur conversations between patient and doctors about end-of-life decisions, and a “safe doctors” registry could discourage that.

“I’m not sure it really serves any purpose other than putting off having those conversations,” Chen said.

On the other side of the issue, Patients Choice Vermont plans to retool itself to provide information to people interested in the option of obtaining a lethal prescription.

Thanks for reporting an error with the story, "‘Death with Dignity’ signed into law in Vermont"

Vermont reports a one-day record of 604 new Covid cases, plus one death