The state Senate voted Monday to place a charge on health insurance premiums and extend an employer assessment to pay for the operation of the state’s new health insurance marketplace, called Vermont Health Connect. 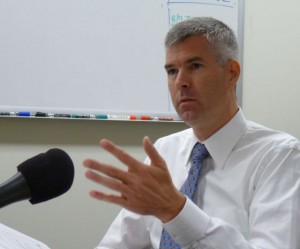 Mark Larson, commissioner of the Department of Vermont Health Access

Senate bill 152, which began this legislative session as a streamlining of the state’s health insurance rate review process, has become the vehicle for financing the operation of the insurance exchange. The language that the House tacked onto S.152 — concerning a new health care advocate’s office, the rate review process and a prior authorization pilot project — was removed from the bill and rolled into House bill 107.

To meet federal standards, the Legislature must provide a sustainable financing mechanism to pay for the operational costs of the state-based insurance exchange. The Shumlin administration estimates that the state will need $18.4 million annually to maintain and run the exchange, and an outside consultant to the Legislature agreed.

The Senate voted to carry forward a contentious assessment on employers to generate this revenue. The assessment is currently used to fund the state-subsidized Catamount health insurance program, but that program is ending in 2014, when the exchange takes full effect. At that time, individual policyholders and employees of Vermont businesses with 50 or fewer employees must purchase their health insurance via the exchange.

The employer assessment is currently indexed to the Catamount plan, but in 2014 it will be adjusted based on the percentage change in premiums of “the second lowest cost silver-level plan” in the exchange. For more on that plan and other plans on the exchange, read here.

Currently, employers are assessed roughly $120 a year for each full-time employee that they do not cover.

The state won’t begin funding the operational costs of the exchange until calendar year 2015, which falls in the middle of FY 2015. Therefore, the administration estimates that the state needs $9.2 million in FY 2015 to run the exchange. This would result in a surplus of $5.2 million moving into FY 2016, if the state only needs $18.4 million.

S.152 also contains an additional charge that would take effect on Jan. 1, 2015. The estimated 118,000 Vermonters who will purchase insurance on the exchange will be charged 1 percent of their annual premium. For a couple purchasing a Blue Cross Blue Shield plan at the proposed silver rate of $10,248 a year, they can expect to pay $102.48 additionally to fund the state’s new marketplace.

But this charge will not be obvious at first glance.

The Senate bill would task the Green Mountain Care Board with setting the amount of the charge and folding it into the rate. This way, Vermonters earning up to 400 percent of the federal poverty line — $45,960 annually for an individual and $62,040 for a couple — will be able to use federal dollars to pay down the extra charge.

The administration had initially proposed a 1 percent hike on an insurance claims assessment to fund the exchange. That assessment is currently set at 0.8 percent of an insurance company’s total annual claims, and the increase would have been phased in over two years, FY 2015 and 2016. The administration estimated the hike alone would have raised an additional $17 million annually.

The Senate Finance Committee decided several weeks ago that this assessment could raise more money than is needed, and decided not to raise it, if it wasn’t necessary.

Mark Larson, commissioner of the Department of Vermont Health Access, is OK with the current financing plan. He said he hopes it won’t be needed in 2017, when the state is eligible for a federal waiver to deviate from the regulations of the Affordable Care Act. That is when Gov. Peter Shumlin and his administration say they want to implement a publicly financed health care system.

“We believe this financing plan satisfies the (federal) requirements, … and we’re comfortable moving forward with it at this time,” Larson said.

Thanks for reporting an error with the story, "Employer assessment and premium charges set to finance health insuran..."