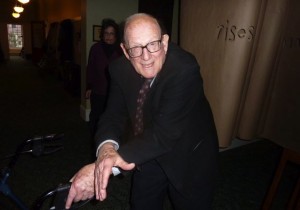 Sen. Bill Doyle in the Statehouse. Photo by Kate Robinson

Things do not, as Robert Burns more pithily put it, always go according to plan.

There is no record that Burns ever said the “greasiest skids gang aft agley.” He probably was no more familiar with the term “grease the skids” than is today’s politician with “gang aft agley," old Scots dialect for “often go askew,” which is what he said happened to “the best-laid schemes of mice and men” the day his plough disturbed a mouse’s nest.

There are no visible mouse nests in the Vermont State Capitol. Skids (planks used for rolling heavy objects from one point to another) and the grease applied to them are visible only in the mind’s eye, but are not literal.

Still, if any skid was ever greased, it would seem to be the one along which the American Federation of Teachers, thousands of independent child-care providers and their legislative allies were trying to pull a bill giving those providers the right to form a union.

Gov. Peter Shumlin is for the bill. So is House Speaker Shap Smith. Senate President Pro Tem John Campbell is not, but he promised not to keep it from coming to the Senate floor, where it was all but certain to pass. All it had to do was win approval from the five-member Senate Economic Development Committee, where it seemed to have three solid votes.

It lost, 3-2, after Sen. Bill Doyle, a pro-labor Washington County Republican who is an AFT member (Doyle teaches at Johnson State College) and who was a co-sponsor of the bill changed his mind and voted against it.

The language of the bill “was changed in the last few days,” Doyle said, “so that only (child-care providers) who received the state subsidy would have a vote (in an election to form a union). I didn’t think that was even-handed.”

Which once again proves the unpredictability of legislatures, even after so many skids had been greased, including, on the part of the AFT, modest contributions to Democratic candidates in Vermont, and a not-so-modest contribution of $250,000 to DGA Action in May 2012, the Super pac affiliated with the Democratic Governors Association (as reported by the Center for Responsive Politics), now led by Shumlin.

This is not corruption, at least not unless the entire political system is corrupt. No one broke a law or a rule. If anything, the failure (so far) of the AFT to get the bill passed is evidence that money can not buy votes, and that even if it can influence a party, it can’t force all members of that party to vote in lockstep. One of the three "no" votes in the Senate committee was that of Sen. Donald Collins, a Franklin County Democrat.

Shumlin told reporters at his weekly press conference on Thursday that that turn of events was a surprise to him. The governor said: “I was anticipating when the bill got to the floor, as I did with the end of life bill that I might well have some constructive conversations with senators."

There is no evidence that Shumlin or other Democrats were persuaded to support child-care provider unionization because the AFT shoveled money into a Democratic superpac. In politics, money follows policy preferences at least as often as policy preferences follow money. Support for organized labor, and for low-income working women, comes naturally to Democrats.

It is true that the kind of union envisioned by the proposed legislation (S.52) is unusual. Collective bargaining usually takes place between employers and their workers. Under this bill, the collective bargaining would be between the state and people who are not its workers, but are business operators themselves.

These entrepreneurs – almost all of them women – operate small child-care centers, usually out of their own homes. Parents who can do so pay some fees out of their own pockets, but most of these customers are low-to-moderate income parents who could not provide the providers with anything close to an adequate income. They don’t make much as it is. So the state subsidizes the providers.

It is that subsidy that would be the main topic of collective bargaining between the providers and the state if the bill passes, and if the providers vote to unionize. 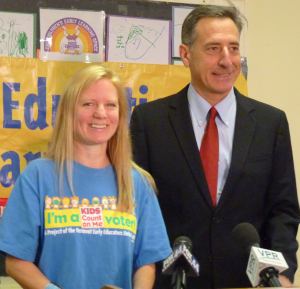 Amy Ligay, executive director of the Children's Early Learning Center, stands with Sen. Peter Shumlin in 2010. Ligay, a member of the American Federation of Teachers, said childcare workers would campaign for Shumlin.

Some lawmakers, including many who are generally pro-union, are uncomfortable with this atypical form of collective bargaining. They also worry that it could encourage other state-subsidized businesspeople, such as landlords, to demand similar bargaining rights. In the view of some lawmakers, the AFT wants to recruit a few thousand more dues-paying members more than it wants to help the child-care providers.

In explaining his opposition to the bill last year, Campbell said the state could always increase the subsidy to the providers, even if they did not enjoy collective bargaining rights.

But Ben Johnson, the president of the Vermont AFT, said talk of raising the subsidy did not emerge until the providers began to fight for collective bargaining rights. In his view, proposing to increase the subsidy was “the first victory” of the union organizing drive.

Johnson said for all practical purposes the child care providers were "quasi-public employees” of the state. Most of their income comes from the state, to which they supply an invaluable service.

He’s right about that. Thousands of parents—many of them single mothers – would not be able to work without the subsidized child care. If they could not work, not only would they be poorer – and perhaps on public assistance – without the income and productivity they create on the job, so would the state.

“These women have been fighting for this for three years, and they’re not going to stop,” Johnson said, sounding very much like a person committed to helping the providers. No doubt the AFT does want more dues-paying members. That does not mean it does not really want to improve the lives of those potential members.

One of the mysteries behind the committee’s rejection of the bill is that the same committee unanimously approved a bill providing almost identical collective bargaining rights to independent, self-employed health care providers.

Part of the solution to that mystery could relate to the fact that the health care union did not enrage Campbell the way Johnson did in a meeting last year when he showed Campbell a document listing the AFT’s political contributions to Democrats. Campbell interpreted that as at least a hint that he was obligated to give the union what it wanted.

Johnson called that interpretation “a misunderstanding.” But unions, businesses, individuals and everyone else who donate to candidates do want something in return for their contributions. The AFT political action committee may have given that $250,000 to the Democratic governors out of general agreement with their policies. That doesn’t mean it expected nothing in return.

So far, it has not gotten it, at least in Vermont. But both Johnson and Doyle agreed that the measure was not dead. It could be attached to the health care bill, or passed as a stand-alone bill in the House, after which the Senate would have to consider it.

Predicting what a legislature will do is risky business. As Robert Burns said to the mouse, “foresight may be vain.”

Thanks for reporting an error with the story, "Margolis: Greased skids don't always lead to easy passage"