The nine-member committee, made up of human rights advocates, lawmakers and state officials, will deliver a report to the Legislature in January, on whether and how to create driver’s licenses for Vermont’s more than 1,000 migrant workers, who work mostly on dairy farms.

Only Flory objected to issuing driver’s licenses to undocumented migrant workers. She said that issuing licenses identical to those used by Vermont citizens could make already existing licenses lose some validity and value. 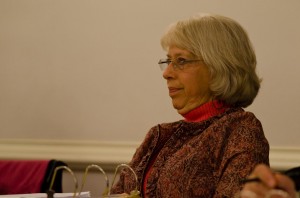 “I have a basic problem with John Q. Public, Vermont citizen, legal Vermont resident, having their license lose some of the validity and some of the value it has right now,” said Flory. “Some type of a driving privilege card, or a different type of license; that makes some sense to me.”

The 8-1 vote on Thursday wasn’t final, since the committee is still ironing out some disagreements over the report’s language, but a consensus emerged for the first time from a majority of members, including Public Safety Commissioner Keith Flynn and Motor Vehicles Commissioner Robert Ide, supporting legislation to allow undocumented migrant workers to obtain Vermont drivers licenses.

Over the summer, the committee took testimony about similar attempts in other states. New Mexico, Utah and Washington state now issue licenses to undocumented immigrants; Tennessee did so for a period, but then discontinued its program amid concerns that it encouraged identity fraud.

Opponents of the proposal say lowering documentation requirements for residents without lawful immigration status could allow fraudsters to obtain IDs and commit crimes.

“If they [lawmakers] are going to do this, they ought to be careful that they construct it in such a way, that they don’t come into the fraud problems that other states have, that we don’t become the magnet state, for folks that are using – as some states testified – using Vermont just to sort of pass the license through," Flory said.

Danilo Lopez, a migrant worker, comments as a member of the public through translator and Vermont Migrant Justice organizer Natalia Fajardo at the Statehouse in October. VTD File Photo/Nat Rudarakanchana

“In New Mexico and Washington state, they have had [fraud] problems, have taken different measures to reduce fraud, and both have actually had success,” he said. Tennessee’s failed experiment doesn’t worry him, he said, partly because the state simply cancelled its program wholesale, without first testing fraud prevention measures.

In committee, O’Neill said that licenses for migrant workers could be subject to higher standards of proof for in-state residency, or shorter expiration terms, to combat fraud. He fears that an alternative license would facilitate discrimination against migrant workers, by immediately signaling their unlawful status.

O’Neill said Flory’s objections about existing licenses losing their integrity had little basis. “We really need to do a good job to make sure that applicants prove identity and residency. But beyond that, if we’re able to ensure that, then it doesn’t change the value of the license at all.”

He said that he’d worked with state Sen. Phil Baruth, D-Burlington, and House Rep. Mollie Burke, D/P-Brattleboro, who told him they would introduce legislation seeking these licenses in their respective transportation committees next year.

After Thursday’s committee meeting, religious, student and labor groups showed solidarity and support for migrant worker licenses, by gathering in the Statehouse’s Cedar Creek Room, accompanied by about 30 migrant workers who turned up specially for the day.

Thanks for reporting an error with the story, "Migrant worker driver's licenses recommended by study group"